Cole is infamous for writing his own copy – usually cheeky oneliners about topical events. But he stepped in it big time when he hijacked the Twitter hash tag “#cairo” with a tweet about a new spring product line that made light of the civil unrest in Egypt. » Twitter Faux Pas. Posted on February 16th, 2011 by Wendy Harman Last night we accidentally tweeted from our @RedCross account something that was meant to come from a personal account. 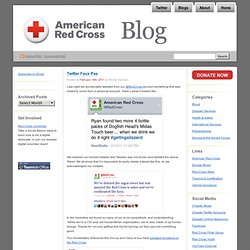 Here’s what it looked like: We realized our honest mistake (the Tweeter was not drunk) and deleted the above Tweet. What Brands Can Learn From Taco Bell's Social Media Lawsuit Defense. Patrick Kerley is the senior digital strategist at Levick Strategic Communications. 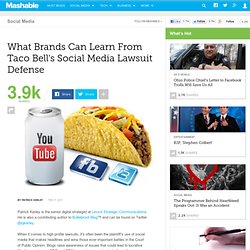 He is also a contributing author to Bulletproof Blog™ and can be found on Twitter @pjkerley. When it comes to high profile lawsuits, it's often been the plaintiff's use of social media that makes headlines and wins those ever-important battles in the Court of Public Opinion. Blogs raise awareness of issues that could lead to lucrative litigation, and smart SEO and SEM campaigns can dominate the online conversation. Social media is used recruit potential class action clients. All the while, the target of the litigation — the defender — often stands mute, from a digital perspective. Dealing with conflict between a community and its manager. As a community manager, you should expect to deal with conflict between members of your online community. 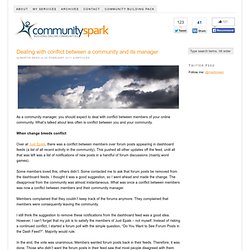 What’s talked about less often is conflict between you and your community. When change breeds conflict. How Social Media Was Used During the Queensland Floods. By Sheldon Levine - Thursday, January 20th, 2011 at 7:29 am ShareThis In 2009 I was fortunate to have lived in Australia for six months. 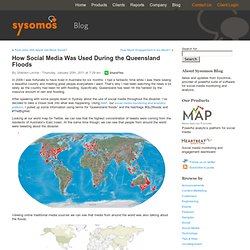 I had a fantastic time while I was there seeing a beautiful country and meeting great people everywhere I went. Crisis Communications in Social Media: Are You Ready? Remember the Monster's Inc. move at Domino's? In the post, I quoted a character from the movie. CDA Agent says: "We can neither confirm nor deny the presence of a human child here tonight. " Do we stipulate that there are canned customers who like to receive canned messages? Big Idea from Dubai: A Global Risk Management Commons Don Tapscott : : Don Tapscott. One of the most important sessions at the Global Agenda Council Summit in Dubai addressed the issue of Managing Global Risks. 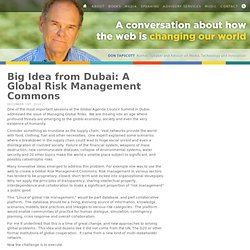 We are moving into an age where profound threats are emerging to the global economy, society and even the very existence of humanity. Consider something as mundane as the supply chain. Vast networks provide the world with food, clothing, fuel and other necessities. 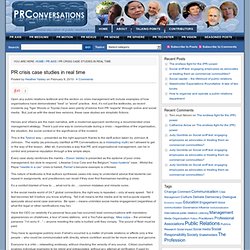 And, it’s not just the textbooks, as recent incidents (eg Tiger Woods or Toyota) have seen plenty of advice from PR “experts” through online and social media. But, just as with the dead tree versions, these case studies are simplistic fictions. Heroes and villains are the main narrative, with a modernist approach reinforcing a recommended crisis management strategy. This is the Tylenol way – presented as the right approach thanks to the swift action taken by Johnson & Johnson. Jeremiah Owyang, Jeremiah Owyang, Partner, Altimeter Group When Real-Time Isn't Fast Enough: The Future Of the Web leweb on USTREAM. Conference. Gestion de crise à l'ère du Web en temps réel. NESTLE KERFUFFLE by Scott Douglas on Prezi.

Janis Krums: -... Crisis Communications in 140 characters or less. - Tuesday, 9th November 2010 at 4Hoteliers. Ink on your fingers from reading the daily newspaper and CNN as the source for all breaking news is almost a distant memory, as news comes to us now via Twitter and other Social Media channels almost instantaneously – and not through the same media filters of the past. 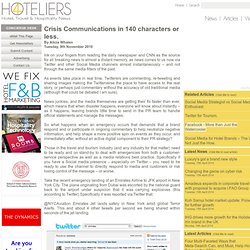 As events take place in real time, Twitterers are commenting, re-tweeting and sharing images making the Twitterverse the place to have access to the real story, or perhaps just commentary without the accuracy of old traditional media (although that could be debated I am sure). News junkies, and the media themselves are getting their fix faster than ever, which means that when disaster happens, everyone will know about instantly – as it happens, leaving brands little time to send in the PR team to handle official statements and manage the messages. Take the recent emergency landing of an Emirates Airline to JFK airport in New York City. @NYCAviation Emirates Jet lands safely in New York amid global Terror Alerts. 1. Crisisblogger. Why Environmental Activists Embrace Social Media.

P.R. Missteps Fueled Fiascos at BP, Toyota and Goldman. , celebrated for engineering cars so utterly reliable that they seemed boring, endured revelations that its most popular models sometimes accelerated for mysterious reasons. The energy giant , which once packaged itself as an environmental visionary, now confronts the future with a new identity: progenitor of the worst in American history. And the Wall Street icon , an elite player in the white-collar-and-suspenders set, found itself derided in Rolling Stone as “a great vampire squid wrapped around the face of humanity, relentlessly jamming its blood funnel into anything that smells like money.” Last month, Goldman agreed to pay $550 million to settle federal securities fraud charges. “These were real reputational implosions,” says Howard Rubenstein, the public relations luminary who represents the New York Yankees and the . 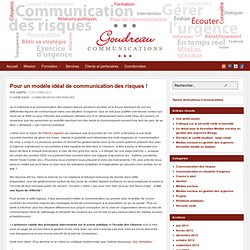 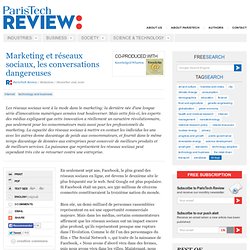 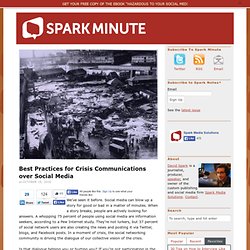 Social media can blow up a story for good or bad in a matter of minutes. When a story breaks, people are actively looking for answers. A whopping 75 percent of people using social media are information seekers, according to a Pew Internet study.