What makes a good advertisement. The term advertising refers to the description of the object in which would catch the attention of potential customers. 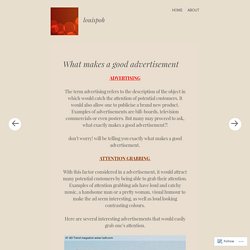 It would also allow one to publicise a brand new product. Examples of advertisements are bill-boards, television commercials or even posters. SSE's orangutan ad is deeply manipulative. Nothing should really surprise us about 21st-century advertising. 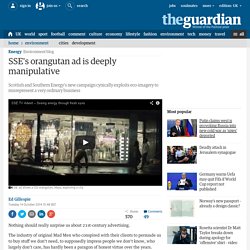 The industry of original Mad Men who conspired with their clients to persuade us to buy stuff we don’t need, to supposedly impress people we don’t know, who largely don’t care, has hardly been a paragon of honest virtue over the years. So Scottish and Southern Energy’s new campaign shouldn’t make my blood boil. But it does. It stars ‘Maya’, a CGI orangutan, exploring a city and apparently marvelling at all the wonderful things that energy can do for us.

What has an orangutan got to do with Scottish and Southern Energy? This wouldn’t be quite so bad if there was actually a meaningful link between Maya and SSE. 28 Deliciously Creative Ads from McDonald’s. McDonald’s is the world’s largest chain of fast food burger restaurants, serving nearly 47 million customers daily with over 31,000 restaurants worldwide, employing more than 1.5 million people. 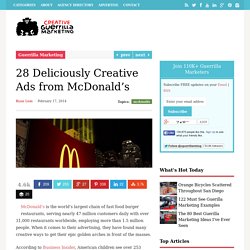 iPhone 6 launch: U2 storm stage and offer new album to iTunes customers for FREE. U2 made a surprise appearance at the Apple iPhone 6 launch tonight - and it's fair to say it went down a treat with the crowd. 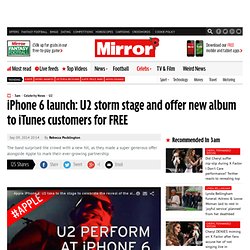 The band - who have a long-running relationship with the technology giant - performed a new hit before offering their brand new album Songs Of Innocence out to iTunes customers for FREE. Oh aren't they lovely souls? It makes it the largest album release of all time, and will be available in 119 countries. Bono dedicated the hit to American musician Joey Ramone, much to the delight of the world, and Apple CEO Tim Cook put it perfectly when he stepped back on stage, hugged the singers, and said: "Wasn't that the most incredible single you've ever heard?

" He added: "We'd love a whole album of that. " Apple. How Samsung took the wind out of Apple’s sails. Well, by now you know all the super-secret details. 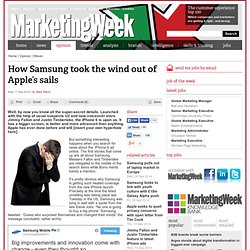 Launched with the help of usual suspects U2 and new voiceover stars Jimmy Fallon and Justin Timberlake, the iPhone 6 is upon us. It has a bigger screen, is better and more advanced than anything Apple has ever done before and will [insert your own hyperbole here]. But something interesting happens when you search for news about the ‘iPhone 6 ad’ online. How Nissan Beat Everyone With a Royal Baby Tweet in Just Seven Minutes.

It was about as real-time as marketing gets. 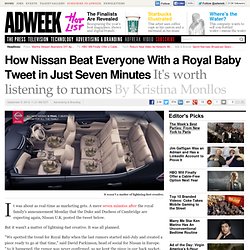 A mere seven minutes after the royal family's announcement Monday that the Duke and Duchess of Cambridge are expecting again, Nissan U.K. posted the tweet below. But it wasn't a matter of lightning-fast creative. It was all planned. "We spotted the trend for Royal Baby when the last rumors started mid-July and created a piece ready to go at that time," said David Parkinson, head of social for Nissan in Europe. "As it happened, the rumor was never confirmed, so we kept the piece in our back pocket. Parkinson adds: "When the rumor was confirmed yesterday we already had everything in place with our agencies and were able to push the creative out very fast. " The pregnancy rumors earlier this summer were spotted by Nissan and DigitasLBi France's BrandLive initiative, which is basically a control center that scans news and trends for ideas the brand might tie into.

BrandLive started in France but is now pan-European. CREDITS Client: Nissan U.K. The invasion of corporate news. The lines between journalism and PR are rapidly becoming blurred as business interests bypass traditional media to get their message across ©Lucas Varela A population of 100,000 is no longer a guarantee that a city like Richmond, California can sustain a thriving daily paper. 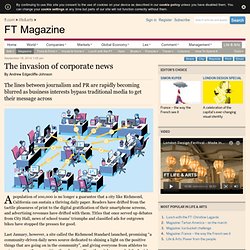 Readers have drifted from the tactile pleasures of print to the digital gratification of their smartphone screens, and advertising revenues have drifted with them. Titles that once served up debates from City Hall, news of school teams’ triumphs and classified ads for outgrown bikes have stopped the presses for good. Last January, however, a site called the Richmond Standard launched, promising “a community-driven daily news source dedicated to shining a light on the positive things that are going on in the community”, and giving everyone from athletes to entrepreneurs the recognition they deserve.

The Richmond Standard website, funded by Chevron. Cross Cultural Marketing Blunders. Although cruel, cross cultural marketing mistakes are a humorous means of understanding the impact poor cultural awareness or translations can have on a product or company when selling abroad. 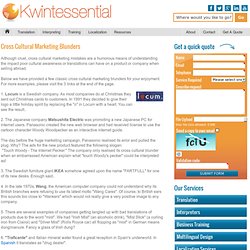 Below we have provided a few classic cross cultural marketing blunders for your enjoyment. For more examples, please visit the 3 links at the end of the page. 1. Locum is a Swedish company. As most companies do at Christmas they sent out Christmas cards to customers.