View rubric. Writing in Medicine. TeachingWritingToAdults-NewTeacherHandbook / Readings for New Teachers browse. When you have just a little time and want to learn more about adult students and writing, the readings suggested below will be helpful. 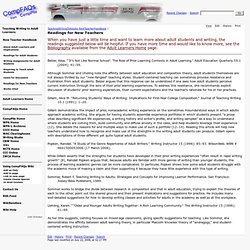 If you have more time and would like to know more, see the Bibliography available from the Adult Learners Home page. Belzer, Alisa. “’It’s Not Like Normal School’: The Role of Prior Learning Contexts in Adult Learning.” Adult Education Quarterly 55.1 (2004): 41–59. Although Sommer and Uheling note the affinity between adult education and composition theory, adult students themselves are not always thrilled by our “new-fangled” teaching styles. Student-centered teaching can sometimes provoke resistance and frustration from adult students. Gillam, Alice M. Gillam demonstrates the impact of prior, nonacademic writing experience on the sometimes misunderstood ways in which adults approach academic writing. Popken, Randall. Sommer, Robert F. Uehling, Karen. “”Older and Younger Adults Writing Together: A Rich Learning Community.”

On Writing Longhand. Over the past three years, one of the most signficant changes I’ve made in my writing habits has been to return to drafting in longhand. 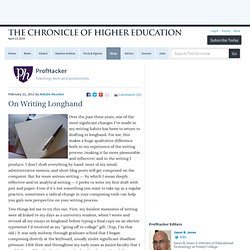 For me, this makes a huge qualitative difference both in my experience of the writing process (making it far more pleasurable and reflective) and in the writing I produce. I don’t draft everything by hand: most of my email, administrative memos, and short blog posts still get composed on the computer. But for more serious writing — by which I mean deeply reflective and/or analytical writing — I prefer to write my first draft with pen and paper.

Even if it’s not something you want to take up as a regular practice, sometimes a radical change in your composing tools can help you gain new perspective on your writing process. Two things led me to try this out. Secondly, I heard one of my favorite contemporary authors, Richard Powers, speaking about his writing process for The Echo Maker. So I began going back to longhand. Written? Kitten! Perspective: Serious Play: Teaching Medical Skills With Impr... : Academic Medicine. It is 1:00 am, and a father anxiously waits for his son to come home. 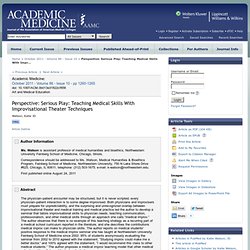 The teen is an hour past curfew, but he strides in with his head held high. “Hey Dad,” he says as he grabs a drink out of the refrigerator. “I've been so worried about you!” The father exclaims, still seated. “You worry too much!” “You should let me know who you're out with because I—” “What'd you do tonight?” This parent–child exchange highlights the difference between role (authority conferred by title) and status (power in relation to another), but this low-status parent and high-status child do not stay that way for long. Tc1.pdf (application/pdf Object)

Lingua Franca. Preparing notes and bibliographies in a consistent style has long been one of the less glamorous tasks of academic writing. And now, with the increasing use—or rather misuse—of citation software, it is surely one of the most rapidly degenerating. A recent poll of university teachers who happened to e-mail me the other day showed that although four of the six require students to use consistent styling in notes and bibliographies, there was generally no close monitoring of the results.

Four of the six also replied that in their own published work they expect notes and bibliographies to appear in a consistent form. However, there was a suspicious vagueness as to exactly how and when this miracle of consistency would emerge. So it’s not surprising that students and scholars are turning to automated methods of getting citations into some kind of shape. Never mind demanding Chicago style of my authors—all I ask is that a style be reasonable and consistent. Return to Top. Fever 103° / Poem of the Day. Fever 103° by Sylvia Plath : Poem Guide : Learning Lab. 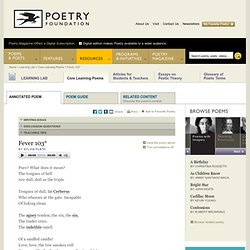 As if from the middle of an unheard conversation. She asks impatiently, “What does it mean?” And then plunges in, conjuring up the heat of a high fever: The tongues of hell Are dull, dull as the triple Tongues of dull, fat Cerberus Who wheezes at the gate. Incapable Of licking clean The aguey tendon, the sin, the sin. In a few bold strokes, Plath uses repetition’s incantatory effect to undercut our assumptions about purity. When Plath repeats “the sin, the sin,” it conjures all kinds, exponentially multiplying sin itself. The poem continues: Love, love, the low smokes roll From me like Isadora’s scarves, I’m in a fright One scarf will catch and anchor in the wheel, Such yellow sullen smokes Make their own element.

Choking the aged and the meek, The weak Hothouse baby in its crib, The ghastly orchid Hanging its hanging garden in the air. 18 Interesting Ways to Support Writing in the C... - &quot;Google Docs&quot; 20 Terrific TED Talks for Language Lovers.