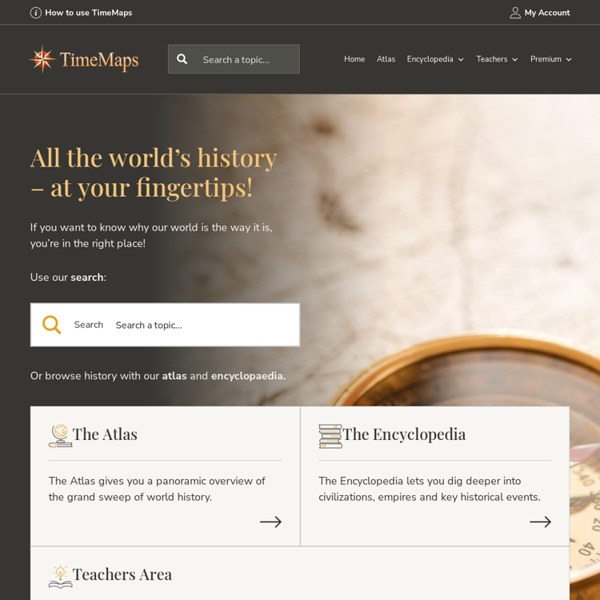 Welcome to TimeMaps TimeMaps' FREE World History Atlas is the most comprehensive history atlas available on the internet. Use our attractive maps and informative articles to access all the civilizations, nations and empires of the past! History starts here... Popular Topics Ancient Egypt maps and timeline

List of timelines From Wikipedia, the free encyclopedia This is a list of timelines currently on Wikipedia. §Types[edit] Historypin Great, you've started a collection - now it needs some pins. Great, you've created a tour - now it needs some pins. You can choose from exisiting pins on Historypin. When you see a pin you like, click the repin button: To find pins, browse Historypin or choose them from your own profile. If you want to upload brand new pins, go for it.

Global inequalities in population, wealth, and religious origin shown in six maps. This map of Canada shows the country's familiar vastness. A single line drawn across its deep south adds a surprising layer of information. The line runs well below the 49th parallel that constitutes that long straight stretch of U.S.

Olaus Magnus’ Carta Marina: Sea monsters on a gorgeous Renaissance map The first time one looks at a color print of Olaus Magnus’ 1539 Carta Marina, the eyes scan the crowded landmass and fix on the creatures in the western part of the map. Larger than the other images and framed by open space, they dominate the chart visually and stir the imagination. To us, the quaint figures rising in the northern waters of Olaus’ map of Scandinavia could be illustrations in a children’s book. However, given that maps chart human knowledge, that they provide glimpses of our understanding of the world at any point in time, Olaus’ 16th-century contemporaries would have regarded the Carta Marina sea monsters differently than we do. Click a monster to learn more.

Life in Old Babylonia: The Importance of Trade Activity 1. How Do We Know the Babylonians Traded? In this activity, students refer to a natural resource map of the region to learn the source of materials for Old Babylonian artifacts reviewed online. Mesopotamia, a hot, dry region subject to floods, became fertile enough to produce a surplus of grain thanks largely to a system of canals first built perhaps a thousand years before the Old Babylonian period. In this way, agricultural products became available for trade.

English Timeline This interactive timeline allows you to explore the evolution of English language and literature, from the 11th century to the present day. Scroll through decade by decade to investigate the richness and diversity of our poetry and prose, as well as the many social, cultural and political strands from which our language has been woven. The timeline includes a fascinating combination of texts: Anglo Saxon tales and medieval illuminations; iconic literary manuscripts and printed texts; as well as letters, newspapers, handbills, posters, charters, speeches and campaign leaflets. Interactive timelines: Comparing the reigns of Victoria and Elizabeth We've sent an email with instructions to create a new password. Your existing password has not been changed. We'll send you a link to create a new password. {* #forgotPasswordForm *} {* traditionalSignIn_emailAddress *}

The Lost Treasure Chest Historical Warrior Illustration Series Part XXIV Pavel Ryzhenko Pavel Ryzhenko is a Russian artist (born in 1970) and professor at the Russian Fine Arts Academy. He specializes in historical & religious paintings. While his paintings may not be historically accurate, but rather give an idea of … Continue reading Egypt's Pyramids: Monuments with a Message Activity 1. Messages in Stone Now that the students know where the pyramids are and how big they are, ask them what these great structures tell us about the ancient Egyptians by observing and analyzing the following tomb artifacts from University of Memphis Museum