How did the news go ‘fake’? When the media went social 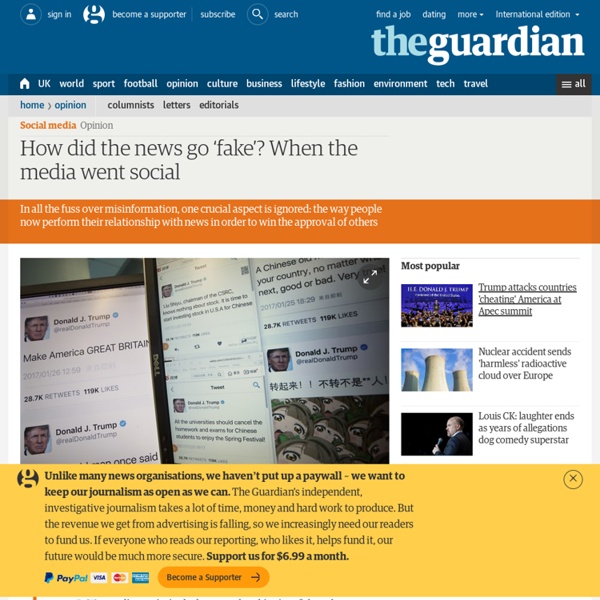 The Collins Dictionary word of the year for 2017 is, disappointingly, “fake news”. We say disappointingly, because the ubiquity of that phrase among journalists, academics and policymakers is partly why the debate around this issue is so simplistic. The phrase is grossly inadequate to explain the nature and scale of the problem. (Were those Russian ads displayed at the congressional hearings last week news, for example?) But what’s more troubling, and the reason that we simply cannot use the phrase any more, is that it is being used by politicians around the world as a weapon against the fourth estate and an excuse to censor free speech. Definitions matter. Social media force us to live our lives in public, positioned centre-stage in our very own daily performances. The social networks are engineered so that we are constantly assessing others – and being assessed ourselves. We grudgingly accept these public performances when it comes to our travels, shopping, dating, and dining.

Buddhism: 11 Common Misunderstandings and Mistakes People believe many things about Buddhism that simply are incorrect. They think Buddhists want to get enlightened so they can be blissed out all the time. If something bad happens to you, it's because of something you did in a past life. Everybody knows that Buddhists have to be vegetarians. The tricks propagandists use to beat science Back in the 1950s, health professionals became concerned that smoking was causing cancer. Then, in 1952, the popular magazine Reader’s Digest published “Cancer by the Carton,” an article about the increasing body of evidence that proved it. The article caused widespread shock and media coverage. Today the health dangers of smoking are clear and unambiguous.

The Man Who Documented Native American Cultures Edward Sheriff Curtis The Man Who Documented Native American Cultures by Chris Nelson Born on a Wisconsin farm in 1868, Edward Sheriff Curtis became fascinated with photography early on, building his own camera at the age 10. "fake news" not new 2 clicks Donald Trump may well be remembered as the president who cried “fake news.” It started after the inauguration, when he used it to discredit stories about the size of the crowd at his inauguration. He hasn’t let up since, labeling any criticism and negative coverage as “fake.” Just in time for awards season, he rolled out his “Fake News Awards” and, in true Trumpian fashion, it appears he is convinced that he invented the term. He didn’t.

Recent discoveries fundamentally change our picture of human evolution - Business Insider As anthropologists have discovered new species of human ancestors, our understanding of human history has changed. By sequencing the genomes from our Neanderthal and Denisovan cousins, scientists have also gained new insight into the genetic origins of our species. As researchers make more of these breakthroughs, the puzzle of who we are and where we came from gets more complicated.The earliest humans may have emerged much earlier, and in a different place in the world, than scientists previously thought.Visit Business Insider's homepage for more stories.

Fake news leaves a lasting impression on the less smart By Alex Fradera One reason why fake news is dangerous is that we don’t like giving up reassuring certainties, and once we have a take on things, it colours further information – hence the seeming bulletproof nature of conspiracy theories and partisan political hatreds. But new research in Intelligence suggests this is truer for some people than others. How biased is your news source? You probably won’t agree with this chart Are we even aware of our biases anymore? If you look at this chart and are convinced your “extreme” source belongs in the middle, you just might be part of the problem plaguing America today. “In the past, national evening news programs, local evening news programs, and the front pages of print newspapers were dominated by fact-reporting stories,” says the chart’s creator, patent attorney Vanessa Otero. “Now, however, many sources people consider to be ‘news sources’ are actually dominated by analysis and opinion pieces.” She released the first version of the chart back in 2016, and she’s updated it several times since. Over the past year, it’s gone viral, with thousands of educators at both the high school and college levels using the compelling visual.

untitled Image copyright Ciprian Ardelean Humans settled in the Americas much earlier than previously thought, according to new finds from Mexico. They suggest people were living there 33,000 years ago, twice the widely accepted age for the earliest settlement of the Americas. The results are based on work at Chiquihuite Cave, a high-altitude rock shelter in central Mexico. How fake news gets into our minds, and what you can do to resist it Although the term itself is not new, fake news presents a growing threat for societies across the world. Only a small amount of fake news is needed to disrupt a conversation, and at extremes it can have an impact on democratic processes, including elections. Read more: We made deceptive robots to see why fake news spreads, and found a weakness But what can we do to avoid fake news, at a time when we could be waiting a while for mainstream media and social networks to step up and address the problem? From a psychology perspective, an important step in tackling fake news is to understand why it gets into our mind.

Teaching Adolescents How to Evaluate the Quality of Online Information An essential part of online research is the ability to critically evaluate information. This includes the ability to assess its level of accuracy, reliability, and bias. In 2012, my colleagues and I assessed 770 seventh graders in two states to study these areas, and the results definitely got our attention. Unfortunately, over 70 percent of the students’ responses suggested that: How Covid-19 Signals the End of the American Era Wade Davis holds the Leadership Chair in Cultures and Ecosystems at Risk at the University of British Columbia. His award-winning books include “Into the Silence” and “The Wayfinders.” His new book, “Magdalena: River of Dreams,” is published by Knopf. Never in our lives have we experienced such a global phenomenon. For the first time in the history of the world, all of humanity, informed by the unprecedented reach of digital technology, has come together, focused on the same existential threat, consumed by the same fears and uncertainties, eagerly anticipating the same, as yet unrealized, promises of medical science. In a single season, civilization has been brought low by a microscopic parasite 10,000 times smaller than a grain of salt.