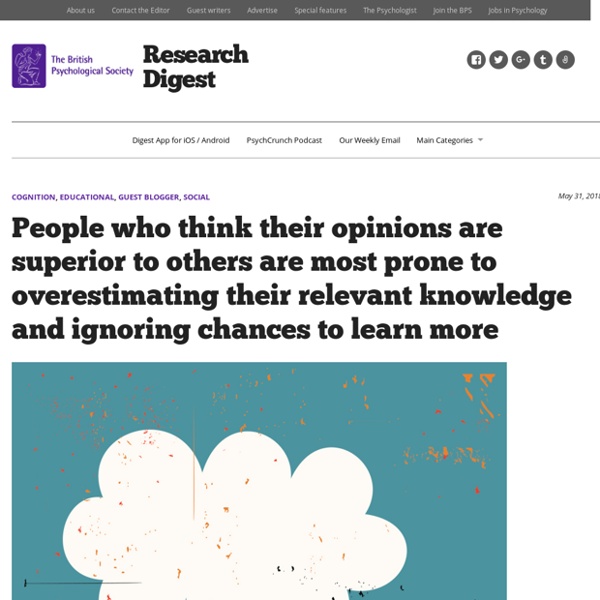 By guest blogger Tom Stafford We all know someone who is convinced their opinion is better than everyone else’s on a topic – perhaps, even, that it is the only correct opinion to have. Maybe, on some topics, you are that person. No psychologist would be surprised that people who are convinced their beliefs are superior think they are better informed than others, but this fact leads to a follow on question: are people actually better informed on the topics for which they are convinced their opinion is superior? This is what Michael Hall and Kaitlin Raimi set out to check in a series of experiments in the Journal of Experimental Social Psychology. The researchers distinguish “belief superiority” from “belief confidence” (thinking your opinion is correct). As well as simple background knowledge, the researchers were also interested in how people with belief superiority sought out new information relevant to that belief. Overall the research presents a mixed picture. Like this:

A quantum experiment suggests there’s no such thing as objective reality Back in 1961, the Nobel Prize–winning physicist Eugene Wigner outlined a thought experiment that demonstrated one of the lesser-known paradoxes of quantum mechanics. The experiment shows how the strange nature of the universe allows two observers—say, Wigner and Wigner’s friend—to experience different realities. Since then, physicists have used the “Wigner’s Friend” thought experiment to explore the nature of measurement and to argue over whether objective facts can exist. That’s important because scientists carry out experiments to establish objective facts.

Truth, truthiness, triangulation: A news literacy toolkit for a “post-truth” world We were guaranteed a free press, We were not guaranteed a neutral or a true press. We can celebrate the journalistic freedom to publish without interference from the state. We can also celebrate our freedom to share multiple stories through multiple lenses. But it has always been up to the reader or viewer to make the reliability and credibility decisions. Macron condemned the rise of nationalism in front of Trump and Putin, warning that 'old demons are reawakening' PARIS (Reuters) - French President Emmanuel Macron used an address to world leaders gathered in Paris for Armistice commemorations on Sunday to send a stern message about the dangers of nationalism, calling it a betrayal of moral values. With US President Donald Trump and Russian President Vladimir Putin sitting just a few feet away listening to the speech via translation earpieces, Macron denounced those who evoke nationalist sentiment to disadvantage others. "Patriotism is the exact opposite of nationalism: nationalism is a betrayal of patriotism," Macron said in a 20-minute address delivered from under the Arc de Triomphe to mark the 100th anniversary of the end of World War One. "By pursuing our own interests first, with no regard to others', we erase the very thing that a nation holds most precious, that which gives it life and makes it great: its moral values." There was no immediate response from either the White House or the Kremlin to Macron's comments.

To think critically, you have to be both analytical and motivated In a world where accusations of "fake news" are thrown around essentially at random, critical thinking would seem to be a must. But this is also a world where the Moon landings are viewed as a conspiracy and people voice serious doubts about the Earth's roundness. Critical thinking appears to be in short supply at a time we desperately need it.

50 Common Cognitive Distortions 3. Negative predictions. Overestimating the likelihood that an action will have a negative outcome. 4. Underestimating coping ability.