Quantum Entanglement. Whatever happened to one particle would thus immediately affect the other particle, wherever in the universe it may be. 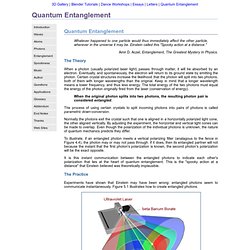 Einstein called this "Spooky action at a distance. " Amir D. Aczel, Entanglement, The Greatest Mystery In Physics. The Theory When a photon (usually polarized laser light) passes through matter, it will be absorbed by an electron. When the original photon splits into two photons, the resulting photon pair is considered entangled. The process of using certain crystals to split incoming photons into pairs of photons is called parametric down-conversion. Normally the photons exit the crystal such that one is aligned in a horizontally polarized light cone, the other aligned vertically. To illustrate, if an entangled photon meets a vertical polarizing filter (analagous to the fence in Figure 4.4), the photon may or may not pass through. The Practice Experiments have shown that Einstein may have been wrong: entangled photons seem to communicate instantaneously.

A Step Towards Quantum Computing: Entangling 10 Billion Particles. In life, most people try to avoid entanglement, be it with unsavory characters or alarmingly large balls of twine. 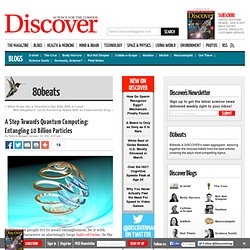 In the quantum world, entanglement is a necessary step for the super-fast quantum computers of the future. According to a study published by Nature today, physicists have successfully entangled 10 billion quantum bits, otherwise known qubits. But the most significant part of the research is where the entanglement happened–in silicon–because, given that most of modern-day computing is forged in the smithy of silicon technology, this means that researchers may have an easier time incorporating quantum computers into our current gadgets.

Quantum entanglement occurs when the quantum state of one particle is linked to the quantum state of another particle, so that you can’t measure one particle without also influencing the other. Spinning particles are all well and nice, but what do they have to do with computing? Image: Stephanie Simmons. Quantum Entanglement Could Stretch Across Time. In the weird world of quantum physics, two linked particles can share a single fate, even when they’re miles apart. Now, two physicists have mathematically described how this spooky effect, called entanglement, could also bind particles across time. If their proposal can be tested, it could help process information in quantum computers and test physicists’ basic understanding of the universe.

“You can send your quantum state into the future without traversing the middle time,” said quantum physicist S. Jay Olson of Australia’s University of Queensland, lead author of the new study. In ordinary entanglement, two particles (usually electrons or photons) are so intimately bound that they share one quantum state — spin, momentum and a host of other variables — between them. Physicists have figured out how to use entanglement to encrypt messages in uncrackable codes and build ultrafast computers.

Olson explained them with a Star Trek analogy. “It stimulated our imaginations,” said Fuentes. Traditional Cryptology Problems" Both the secret-key and public-key methods of cryptology have unique flaws. 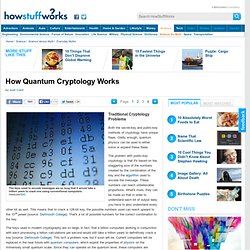 Oddly enough, quantum physics can be used to either solve or expand these flaws. The problem with public-key cryptology is that it's based on the staggering size of the numbers created by the combination of the key and the algorithm used to encode the message. These numbers can reach unbelievable proportions. What's more, they can be made so that in order to understand each bit of output data, you have to also understand every other bit as well. This means that to crack a 128-bit key, the possible numbers used can reach upward to the 1038 power [source: Dartmouth College]. The keys used in modern cryptography are so large, in fact, that a billion computers working in conjunction with each processing a billion calculations per second would still take a trillion years to definitively crack a key [source: Dartmouth College]. But SKC has its problems as well. Quantum physics has provided a way around this problem.

How Quantum Cryptology Works" The idea that a vote cast by a person remains the same after he submitted it is taken very seriously in any democracy. 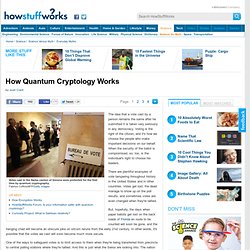 Voting is the right of the citizen, and it's how we choose the people who make important decisions on our behalf. When the security of the ballot is compromised, so, too, is the individual's right to choose his leaders. There are plentiful examples of vote tampering throughout history in the United States and in other countries. Bibliography of Quantum Cryptography. By Gilles Brassard Département IRO, Université de Montréal. 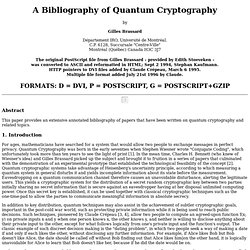 C.P. 6128, Succursale "Centre-Ville" Montréal (Québec) Canada H3C 3J7 The original PostScript file from Gilles Brassard - provided by Edith Stoeveken - was converted to ASCII and reformatted in HTML; Sept 2 1994, Stephan Kaufmann. HTTP pointers to DVI files added by Claude Crépeau, March 6 1995. An important quantum algorithm may actually be a property of nature. Back in 1996, a quantum physicist at Bell Labs in New Jersey published a new recipe for searching through a database of N entries. 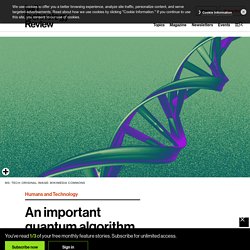