Moral theories at a glance. Unlocking the Science of How Kids Think: A new proposal for reforming teacher education. In 2002 I was invited to give a talk to 500 school teachers. 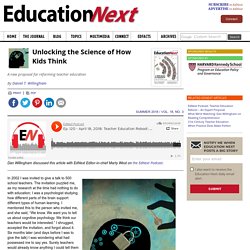 The invitation puzzled me, as my research at the time had nothing to do with education; I was a psychologist studying how different parts of the brain support different types of human learning. I mentioned this to the person who invited me, and she said, “We know. We want you to tell us about cognitive psychology. We think our teachers would be interested.” I shrugged, accepted the invitation, and forgot about it. But it wasn’t. Yet the following 15 years have shown that experience was not a fluke. What Should Teachers Know? Is my experience representative? But perhaps when teachers say they “know how children learn,” they are not talking about learning from a scientific perspective but about craft knowledge. Most education researchers disagree, and they offer a reasonable argument. Whether for this reason or others, most teacher-education programs require some coursework in educational psychology.

Reform in Teacher Education. Sudbury Valley School and Unschoolers: We Are Closer Than You Think — John Holt GWS. The divisive nature of our culture and politics has made everything hard to discuss without falling into absolutist positions, but I was particularly disappointed when I read Dan Greenberg’s essay “Let’s Be Clear: Sudbury Valley Schools and Unschooling Have NOTHING in Common.” 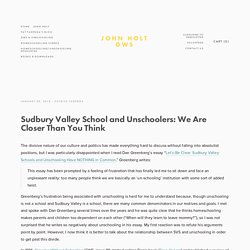 Greenberg writes: This essay has been prompted by a feeling of frustration that has finally led me to sit down and face an unpleasant reality: too many people think we are basically an ‘un-schooling’ institution with some sort of added twist. Greenberg’s frustration being associated with unschooling is hard for me to understand because, though unschooling is not a school and Sudbury Valley is a school, there are many common denominators in our motives and goals. I met and spoke with Dan Greenberg several times over the years and he was quite clear that he thinks homeschooling makes parents and children too dependent on each other (“When will they learn to leave mommy?”) About FHI - Future of Humanity Institute. FHI is a multidisciplinary research institute at the University of Oxford. 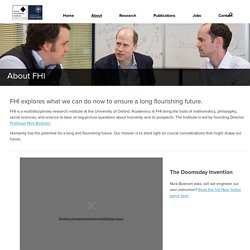 Academics at FHI bring the tools of mathematics, philosophy, social sciences, and science to bear on big-picture questions about humanity and its prospects. The Institute is led by founding Director Professor Nick Bostrom. Humanity has the potential for a long and flourishing future. Our mission is to shed light on crucial considerations that might shape our future. Excellence Researchers at the Future of Humanity Institute have originated or played a pioneering role in developing many of the concepts that shape current thinking about humanity’s deep future. 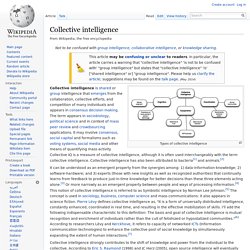 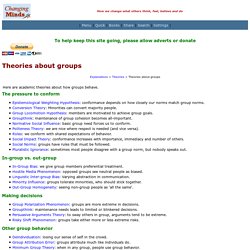 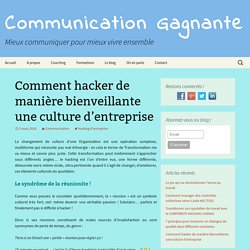