The tricks propagandists use to beat science 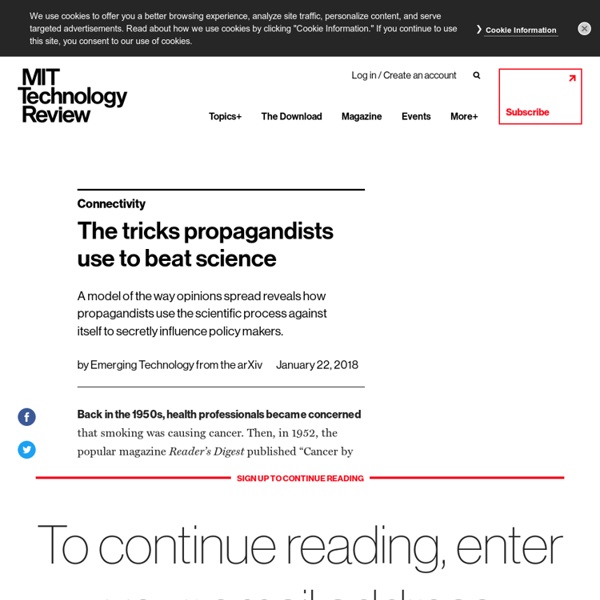 Back in the 1950s, health professionals became concerned that smoking was causing cancer. Then, in 1952, the popular magazine Reader’s Digest published “Cancer by the Carton,” an article about the increasing body of evidence that proved it. The article caused widespread shock and media coverage. Today the health dangers of smoking are clear and unambiguous. And yet smoking bans have been slow to come into force, most having appeared some 40 years or more after the Reader’s Digest article. The reason for this sluggishness is easy to see in hindsight and described in detail by Naomi Oreskes and Erik Conway in their 2010 book Merchants of Doubt. Together, tobacco companies and the PR firm created and funded an organization called the Tobacco Industry Research Committee to produce results and opinions that contradicted the view that smoking kills. The approach was hugely successful for the tobacco industry at the time. The original tobacco strategy involved several lines of attack.

5 things the media does to manufacture outrage. 5 things the media does to manufacture outrage. People are so sensitive these days! People are just offended by every little thing! Millennials, amirite?! Is the world more easily “outraged” than it used to be? I don’t think so, but then again, there’s no real way to tell. "fake news" not new 2 clicks Donald Trump may well be remembered as the president who cried “fake news.” It started after the inauguration, when he used it to discredit stories about the size of the crowd at his inauguration. He hasn’t let up since, labeling any criticism and negative coverage as “fake.” Just in time for awards season, he rolled out his “Fake News Awards” and, in true Trumpian fashion, it appears he is convinced that he invented the term. He didn’t.

Weasel word - Wikipedia A weasel word, or anonymous authority, is an informal term for words and phrases aimed at creating an impression that a specific or meaningful statement has been made, when instead only a vague or ambiguous claim has actually been communicated. This can enable the speaker to later deny the specific meaning if the statement is challenged. Where this is the intention, use of weasel words is a form of tergiversation. Weasel words can be used in advertising and in political statements, where it can be advantageous to cause the audience to develop a misleading impression. Some weasel words have the effect of softening the force of a potentially loaded or otherwise controversial statement through some form of understatement; for example, using detensifiers such as "somewhat" or "in most respects".[1]

“This Is the Future That Liberals Want” Is the Joke That Liberals Need In 1999, John Rocker, a beefy young relief pitcher for the Atlanta Braves, explained to Sports Illustrated why he’d never want to play baseball in New York. “Imagine having to take the [Number] 7 train to the ballpark, looking like you’re [riding through] Beirut next to some kid with purple hair next to some queer with AIDS right next to some dude who just got out of jail for the fourth time right next to some 20-year-old mom with four kids,” he said. “It’s depressing.” The tabloids raged, local politicians condemned the remarks, and Major League Baseball suspended him for the first few months of the coming season. How biased is your news source? You probably won’t agree with this chart Are we even aware of our biases anymore? If you look at this chart and are convinced your “extreme” source belongs in the middle, you just might be part of the problem plaguing America today. “In the past, national evening news programs, local evening news programs, and the front pages of print newspapers were dominated by fact-reporting stories,” says the chart’s creator, patent attorney Vanessa Otero. “Now, however, many sources people consider to be ‘news sources’ are actually dominated by analysis and opinion pieces.” She released the first version of the chart back in 2016, and she’s updated it several times since. Over the past year, it’s gone viral, with thousands of educators at both the high school and college levels using the compelling visual.

10 Ways Manipulators Use Emotional Intelligence for Evil (and How to Fight Back) Emotional intelligence is nothing new. Sure, the term was coined in the 1960's, and popularized by psychologists in recent decades. But the concept of emotional intelligence--which I define as a person's ability to recognize and understand emotions and use that information to guide decision making--has been around as long as we have. This skill we refer to as emotional intelligence (also known as EI or EQ) is like any other ability: You can cultivate it, work to enhance it, sharpen it. And it's important to know that just like other skills, emotional intelligence can be used both ethically and unethically.

Teaching Adolescents How to Evaluate the Quality of Online Information An essential part of online research is the ability to critically evaluate information. This includes the ability to assess its level of accuracy, reliability, and bias. In 2012, my colleagues and I assessed 770 seventh graders in two states to study these areas, and the results definitely got our attention. Unfortunately, over 70 percent of the students’ responses suggested that: Conservative correctness Right-Wing Political Correctness (RWPC),[1] also Conservative Correctness (CC) or Patriotic Correctness (PC),[2] is a brand of political correctness practiced by conservatives. While left-wing political correctness (LWPC) attempts to minimize offense through the (often endless) rebranding of certain words to be neutral or inclusive, RWPC rebrands terms to increase offense, increase scorn, and increase political bias. For example, homosexuality isn't RWPC; instead, we should use "unnatural vice",[3][4][5] in order to appeal to people's (here, hateful) religious beliefs over science and tolerance. All too often, people confuse this with political incorrectness due to both being against liberal political correctness, though political incorrectness is equally against both.