That Uplifting Tweet You Just Shared? A Russian Troll Sent It 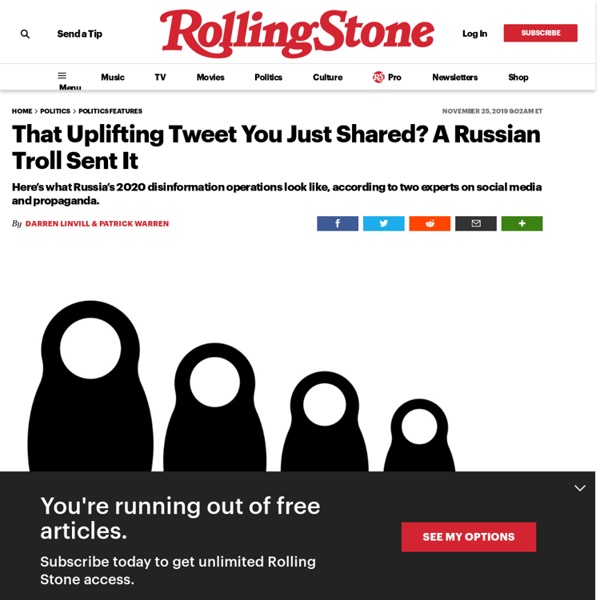 Internet trolls don’t troll. Not the professionals at least. Professional trolls don’t go on social media to antagonize liberals or belittle conservatives. They are not narrow minded, drunk or angry. They don’t lack basic English language skills. They certainly aren’t “somebody sitting on their bed that weighs 400 pounds,” as the president once put it. Professional trolls, on the other hand, are the tip of the spear in the new digital, ideological battleground. On August 22, 2019, @IamTyraJackson received almost 290,000 likes on Twitter for a single tweet. The purpose of the Tyra account, we believe, was not to spread heartwarming messages to Americans. We’ve spent the past two years studying online disinformation and building a deep understanding of Russia’s strategy, tactics, and impact. Professional trolls are good at their job. Disinformation operations aren’t typically fake news or outright lies. As good marketers, professional trolls manipulate our emotions subtly. Volume 0%

Stendhal on the Seven Stages of Romance and Why We Fall Out of Love: Timeless Wisdom from 1822 Love is perhaps the most fertile subject of literature, music, and all the arts. Kurt Vonnegut believed you’re only allowed to be in love three times in your life. It has been described as a matter of bravery, a limbic revision, the greatest insurance against regret. The Sickness in Our Food Supply “Only when the tide goes out,” Warren Buffett observed, “do you discover who’s been swimming naked.” For our society, the Covid-19 pandemic represents an ebb tide of historic proportions, one that is laying bare vulnerabilities and inequities that in normal times have gone undiscovered. Nowhere is this more evident than in the American food system.

*Truth, truthiness, triangulation: A news literacy toolkit for a “post-truth” world We were guaranteed a free press, We were not guaranteed a neutral or a true press. We can celebrate the journalistic freedom to publish without interference from the state. We can also celebrate our freedom to share multiple stories through multiple lenses. People who think their opinions are superior to others are most prone to overestimating their relevant knowledge and ignoring chances to learn more By guest blogger Tom Stafford We all know someone who is convinced their opinion is better than everyone else’s on a topic – perhaps, even, that it is the only correct opinion to have. Maybe, on some topics, you are that person. No psychologist would be surprised that people who are convinced their beliefs are superior think they are better informed than others, but this fact leads to a follow on question: are people actually better informed on the topics for which they are convinced their opinion is superior?

Neither a rigged market nor Vera Lynn will pick the crops The crop picking crisis is revealing the fundamental failures of free-market capitalism and invoking national spirit won't fix it, argues Kevin Ovenden In a recent Guardian article 'Farms still need up to 40,000 UK workers to harvest fruit and veg' are details that raise some profound questions about which socialists have convincing points to make and answers to give. A running issue in the piece is that while there has been a response from UK-based workers to meet the demand for agricultural labour, big farmers are worried that even those who have taken up work will just switch to what they feel are better jobs (pay, conditions, compatibility with their lives) when other parts of the economy open up.

PolitiFact's guide to fake news websites and what they peddle At first look, BostonTribune.com certainly seems a trustworthy source. So does KMT11.com. And ABCNews.com.co. How AI could transform the way we measure kids' intelligence There is a saying in education that you treasure what you measure. Going by the standardized tests that dominate schools in many countries around the world, we’re teaching children that we value only a very narrow definition of intelligence—the ability to solve word problems about train times, or identify the purpose of a World War I treaty on a multiple-choice test. The truth is human intelligence is vast and complex.

Study shows feasibility of handheld UV COVID-19 killer A handheld device that emits high-intensity ultraviolet light to disinfect areas from bacteria and viruses such as COVID-19 is now feasible, claim researchers in the US and Japan. Chemicals or ultraviolet radiation exposure are two methods commonly used sanitise and disinfect areas. The UV radiation is in the 200nm to 300nm range and known to destroy COVID-19 virus. Widespread adoption of this approach requires UV radiation sources that emit sufficiently high doses of UV light. Devices with these high doses exist, but the UV radiation source is typically an expensive mercury-containing gas discharge lamp which requires high power, has a relatively short lifetime, and is bulky. The solution is to develop high-performance, UV light emitting diodes, which would be far more portable, long-lasting, energy efficient and environmentally benign.

Philosophy in the Contemporary World: Sounds of Silence, or Are We Responsible for What We Avoid Saying? By Elisabeth Camp Recent testimony by James Comey and Jeff Sessions before the Senate Intelligence Committee offers fertile terrain for anyone interested in the nuances of verbal communication. If President Trump did indeed request that Comey “let this go, let Flynn go,” then that would prima facie appear to constitute, or at least contribute to, obstruction of justice.