The Art Of Effortless Living. - Taoism. Zhuangzi. The Zhuangzi (also known in Wade-Giles romanization romanization as Chuang-tzu), named after “Master Zhuang” was, along with the Laozi, one of the earliest texts to contribute to the philosophy that has come to be known as Daojia, or school of the Way. 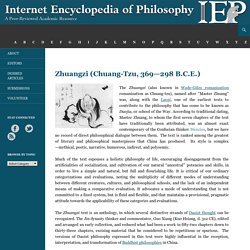 According to traditional dating, Master Zhuang, to whom the first seven chapters of the text have traditionally been attributed, was an almost exact contemporary of the Confucian thinker Mencius, but we have no record of direct philosophical dialogue between them. The text is ranked among the greatest of literary and philosophical masterpieces that China has produced. Its style is complex—mythical, poetic, narrative, humorous, indirect, and polysemic. Much of the text espouses a holistic philosophy of life, encouraging disengagement from the artificialities of socialization, and cultivation of our natural “ancestral” potencies and skills, in order to live a simple and natural, but full and flourishing life. Table of Contents 1. 2. 3. A. Taoist Texts. Important Taoist texts include the Tao-te Ching, the Chuang-tzu and several other less famous works of Taoist philosophy. 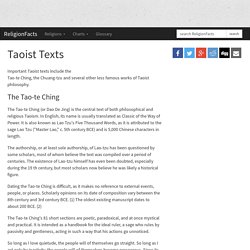 The Tao-te Ching The Tao-te Ching (or Dao De Jing) is the central text of both philosophical and religious Taoism. In English, its name is usually translated as Classic of the Way of Power. It is also known as Lao Tzu's Five Thousand Words, as it is attributed to the sage Lao Tzu ("Master Lao," c. 5th century BCE) and is 5,000 Chinese characters in length. The authorship, or at least sole authorship, of Lao-tzu has been questioned by some scholars, most of whom believe the text was compiled over a period of centuries. Dating the Tao-te Ching is difficult, as it makes no reference to external events, people, or places. 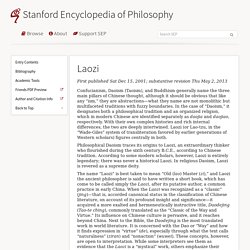 The Laozi Story The Shiji (Records of the Historian) by the Han dynasty (206 B.C.E.–220 C.E.) court scribe and historian Sima Qian (ca. 145–86 B.C.E.) offers a “biography” of Laozi. Its reliability has been questioned, but it provides a point of departure for reconstructing the Laozi story. Laozi was a native of Chu, according to the Shiji, a southern state in the Zhou dynasty (see map and discussion in Loewe and Shaughnessy 1999, 594 and 597). His surname was Li; his given name was Er, and he was also called Dan. “Laozi cultivated Dao and virtue,” as Sima Qian goes on to relate, and “his learning was devoted to self-effacement and not having fame.

Few scholars today would subscribe fully to the Shiji report. In an influential essay, A. The fact that Laozi appears favorably in both Confucian and Daoist sources seems to argue against the likelihood that the figure was fabricated for polemical purposes. Admittedly, this is conjecture.

Tao Te Ching. Overview of Taoism. Taoism/Daoism* is an organized religious tradition which has been unfolding its various forms in China, and elsewhere, for upwards of 2,000 years. 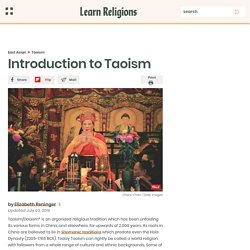 Its roots in China are believed to lie in Shamanic traditions which predate even the Hsia Dynasty (2205-1765 BCE). Today Taoism can rightly be called a world religion, with followers from a whole range of cultural and ethnic backgrounds. Some of these practitioners choose to affiliate with Taoist temples or monasteries, i.e. the formal, organized, institutional aspects of the faith. Others walk a hermit’s path of solitary cultivation, and still, others adopt aspects of a Taoist world-view and/or practices while maintaining a more formal connection to another religion.

Explanation of the Shamanic Origins of Taoism in China. The beginnings of recorded historical China lie some 5,000 years ago when a tribal people settled along the banks of the Yellow River -- its source high on the Tibetan plateau, its mouth at the Yellow Sea. 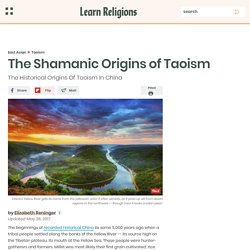 These people were hunter-gatherers and farmers. Millet was most likely their first grain cultivated; rice and corn and wheat coming later. Evidence exists that they were also potters and musicians and that they produced the world’s first wine. The Wu – Shamans of Ancient China Their relationship to the cosmos was a shamanic one. The Three Sovereigns & Five Emperors The leaders of this pre-dynastic era were the legendary Three Sovereigns, or “August Ones,” and the Five Emperors – morally perfected sage-kings who used their magical powers to protect their people and to create conditions for peaceful and harmonious living.

The Tao Te Ching by Laozi: ancient wisdom for modern times. Two thousand four hundred years after it was composed, we need the Tao Te Ching's lessons in self-awareness more than ever. 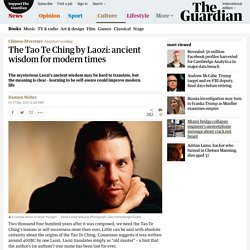 Little can be said with absolute certainty about the origins of the Tao Te Ching. Consensus suggests it was written around 400BC by one Laozi. Laozi translates simply as "old master" – a hint that the author's (or authors') true name has been lost for ever. Tao Te Ching translates very roughly as "the way of integrity". In its 81 verses it delivers a treatise on how to live in the world with goodness and integrity: an important kind of wisdom in a world where many people believe such a thing to be impossible. 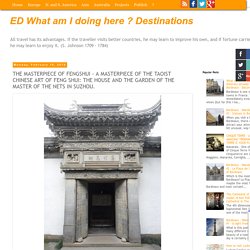 The House and the Garden of the Master of the Nets is no doubt the most amazing house in Suzhou.Suzhou is a beautiful town situated around two hours away from Shanghai and it is particularly famous for its canal, so to be called "The Venice of Asia" (please read our dedicated post for more info about Suzhou)