Manly This and That

LA TABLE. Sisyphus Industries. Put Salt in the Corners of Your House and Watch What Happens - ZergNet. © 2019 ZergNet.com. 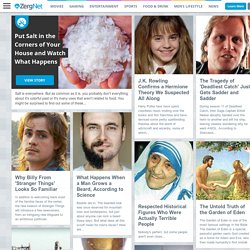 All rights reserved Menu ZergNet Learn More Login Put Salt in the Corners of Your House and Watch What Happens Salt is everywhere. J.K. The Tragedy of 'Deadliest Catch' Just Gets Sadder and Sadder During season 11 of Deadliest Catch, then Saga Captain Elliott Neese abruptly handed over the helm to another and left his ship, leaving viewers wondering why he went AWOL. Why Billy From 'Stranger Things' Looks So Familiar In addition to welcoming back most of the familiar faces of the series, the new season of Stranger Things will introduce a few newcomers, from an intriguing new lifeguard to an ambitious politician. What Happens When a Man Grows a Beard, According to Science Beards are in. 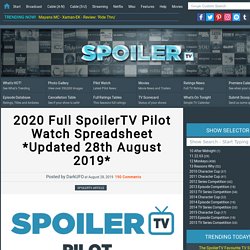 All dead/non-picked up and ordered to series pilots have been removed from the new sheet. Juuling at DuckDuckGo. An entrepreneur who interviewed 21 billionaires says the same 6 habits helped make all of them successful. Prince Harry and Meghan Markle's baby: Royal couple could be headed for tax headache. Because of Meghan Markle's American citizenship, her baby will be liable for U.S. income tax.Children of American citizens are considered U.S. taxpayers no matter where in world they are born.Prince Harry and Meghan's child could avoid U.S. taxes when he or she turns 18 by renouncing their American citizenship. 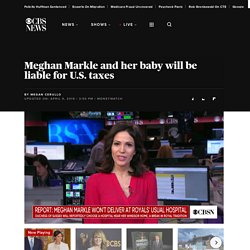 Meghan Markle and Prince Harry won't be the only ones with their hands full when their baby arrives later this month — so will the royal tax accountants. Thanks to Markle's American citizenship, their firstborn child — who will be seventh in line to the British throne — will automatically become a U.S. citizen and thus be liable for federal income tax.

"When a child is born a U.S. citizen, they are a U.S. taxpayer irrespective of residency," international tax lawyer Stuart E. Horwich told CBS MoneyWatch. "The kid will have to list all foreign bank and financial accounts in which he or she has an interest," he said. The Awakening. BREAK THE HEAVINESS. The constant barrage of terrifying headlines and mainstreaming of perversion vexes the child of God. 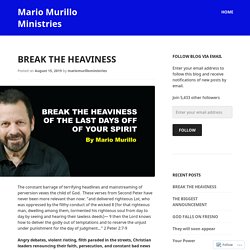 These verses from Second Peter have never been more relevant than now: “and delivered righteous Lot, who was oppressed by the filthy conduct of the wicked 8 (for that righteous man, dwelling among them, tormented his righteous soul from day to day by seeing and hearing their lawless deeds)— 9 then the Lord knows how to deliver the godly out of temptations and to reserve the unjust under punishment for the day of judgment…” 2 Peter 2:7-9 Angry debates, violent rioting, filth paraded in the streets, Christian leaders renouncing their faith, persecution, and constant bad news can drain the sanity from our souls. 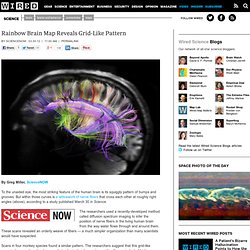 But within those curves is a latticework of nerve fibers that cross each other at roughly right angles (above), according to a study published March 30 in Science. The researchers used a recently-developed method called diffusion spectrum imaging to infer the position of nerve fibers in the living human brain from the way water flows through and around them. These scans revealed an orderly weave of fibers — a much simpler organization than many scientists would have suspected. 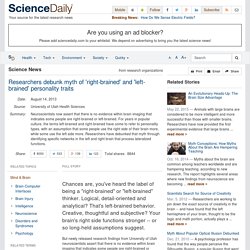 Logical, detail-oriented and analytical? That's left-brained behavior. Creative, thoughtful and subjective? Cellular Memory Phenomenon Explained: Consciousness Beyond the Brain. Hat tip to Don Salmon for bringing this to my attention. 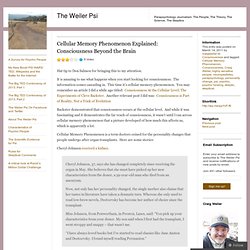 It is amazing to me what happens when you start looking for consciousness. The information comes cascading in. This time it’s cellular memory phenomenon. You may remember an article I did a while ago titled: Consciousness At the Cellular Level: The Experiments of Cleve Backster. Another relevant post I did was: Consciousness is Part of Reality, Not a Trick of Evolution Backster demonstrated that consciousness occurs at the cellular level. Cellular Memory Phenomenon is a term doctors coined for the personality changes that people undergo after organ transplants. Everlovin' Lives. Expressions of Interest. Function Feels Form. Ground zero. PHOTO OPS. Remind Us. Room for Interpretation. Tools We Live With. Watch and Learn. Listening Lab.