US Capitol riot: The myths behind the tattoos worn by 'QAnon shaman' Jake Angeli. The defining image of the storming of the US Capitol on January 6 was undoubtedly that of a bare-chested man posing resplendent in a horned fur hat and face paint. 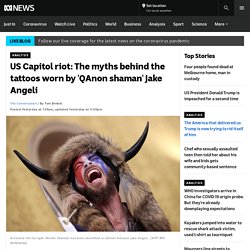 Images of him in his weird costume have been shared across the globe — he seems to perfectly encapsulate the absurdity of the mob takeover of America's sacred seat of power. The individual in question has since been identified in the media as a far-right activist from Arizona by the name of Jacob Chansley (also known as Jake Angeli). He was quickly alleged to be an adherent of the QAnon conspiracy theory — though not before fake rumours spread that he was actually an antifa "plant".

One thing that should make it very clear where Angeli's politics lie are his tattoos. On his torso he has a large Thor's hammer, known as Mjölnir, and what appears to be an image of the Norse world tree, Yggdrasill. Above these tattoos with a central place in Norse mythology is one that is more contentious. Borrowed symbols Dog whistles. Norse code: project aims to decipher sound of old languages. Vikings are well known for helmets, swords and longboats, and they must have made a racket when raiding settlements, but history does not quite record what they sounded like. 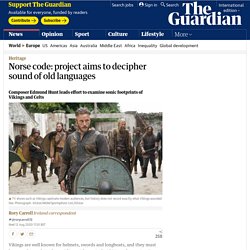 The centuries cast a hush over their conversations, poems, songs and music. That may soon change because a pioneering research project aims to breathe life into the sounds of early medieval languages, including Old Norse and Early Irish. It’s important to say this is not a step towards a paywall We need more readers to register with us to help sustain our independent, quality journalism. Without you taking this simple step, we miss out on revenues from personalised advertising - a critical source of funding for our future. Through doing so, you'll help ensure that our reporting remains freely available to everyone, and if we recognise you when you come back, we can improve your news experience too. Have a subscription? Runic alphabets / Runes / Futhark. Little is known about the origins of the Runic alphabet, which is traditionally known as futhark after the first six letters. 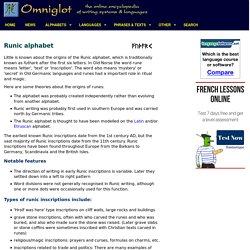 In Old Norse the word rune means 'letter', 'text' or 'inscription'. Runic magic. In medieval sources, notably the Poetic Edda, the Sigrdrífumál mentions "victory runes" to be carved on a sword, "some on the grasp and some on the inlay, and name Tyr twice. 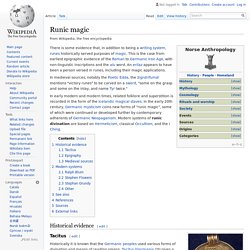 " In early modern and modern times, related folklore and superstition is recorded in the form of the Icelandic magical staves. In the early 20th century, Germanic mysticism coins new forms of "runic magic", some of which were continued or developed further by contemporary adherents of Germanic Neopaganism. Modern systems of runic divination are based on Hermeticism, classical Occultism, and the I Ching. Historical evidence[edit] Tacitus[edit] They attach the highest importance to the taking of auspices and casting lots. It is often debated whether "signs" refers specifically to runes or to other marks; both interpretations are plausible and Tacitus does not give enough detail for a definite decision to be made.[2] Epigraphy[edit] Oswald the Runemaker - Home Page.

Hi Arthur! That's a bummer, and thanks for bringing that to my attention. The best you can do is use the wayback machine and look at an archived version of the site: You can look at some parts of the site but not all of it will be archived. Hopefully the wesbite owner gets the site back online soon but it looks like that there hasn't been much activity since October '17. Happy searching and pearling. Cheers j – jtlawson 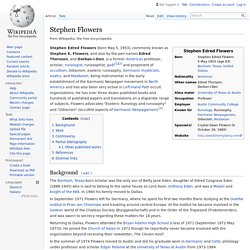 Flowers, and also by the pen-names Edred Thorsson, and Darban-i-Den, is a former American professor, scholar, runologist, runosophist, goði[1][2] and proponent of occultism, Odianism, esoteric runosophy, Germanic mysticism, Asatru, and Mazdaism, being instrumental in the early establishment of the Germanic Neopagan movement in North America and has also been very active in Left-Hand Path occult organizations. He has over three dozen published books and hundreds of published papers and translations on a disparate range of subjects. A Few Words About Edred Thorsson... There are as many opinions about Edred Thorsson as there are readers of his books, and there are plenty of those. 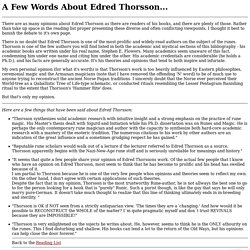 Rather than take up space in the reading list proper presenting these diverse and often conflicting viewpoints, I thought it best to banish the debate to it's own page. Runes and Rune Magick. Rune Meaning – Elder Futhark. Rune Meanings - The Elder Futhark. I work with the "Elder Futhark", the runic alphabet which is a composite of the runic symbols most commonly used in northern Europe. 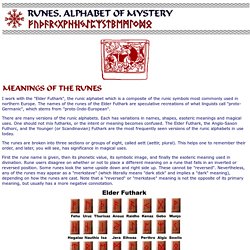 The names of the runes of the Elder Futhark are speculative recreations of what linguists call "proto-Germanic", which stems from "proto-Indo-European". There are many versions of the runic alphabets. Each has variations in names, shapes, esoteric meanings and magical uses. One should not mix futharks, or the intent or meaning becomes confused.