HumanProgress. Prosperity By Design : Democracy Journal. Today we are in the early stages of building a new infrastructure for work; think of it as a new operating system for creating value and getting things done. 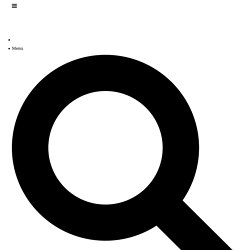 A combination of next-generation networking, distributed computing, and artificial intelligence (AI) is laying the groundwork for this transformation, catalyzing the emergence of a worldwide digital coordination economy. How Different Cultures Understand Time. The Emotional Healing Process That Will Actually Make You Feel Better. Gen Z’s relationship with tech: They don’t want to be always reachable. Each generation is more connected than the last, but the latest generation, those born after 1998, wants to buck the trend. 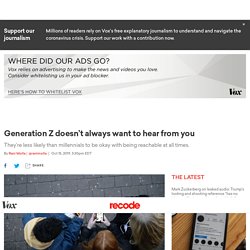 Members of so-called Generation Z are less likely than their millennial counterparts (66 percent versus 71 percent for women, and 57 percent versus 74 percent for men) to want to be “always reachable,” according to a new survey of 1,500 US residents by market research firm GfK Consumer Life. That puts them more in line with older US generations. About 60 percent of people of all generations in the US are okay with being reachable all the time. GfK interprets this as a potential sign of tech fatigue, but it could also be a different way of engaging with tech in the first place.

Generation Z, the eldest of whom are 21 years old, are digital natives, meaning they’ve been raised with computers and on the internet. Rates of suicide and depression are on the rise among young people, and many blame tech for that shift despite no conclusive evidence drawing a connection. George E. Vaillant's: Aging Well: Surprising Guideposts to a Happier Life from the Landmark Harvard Study of Adult Development. George E. 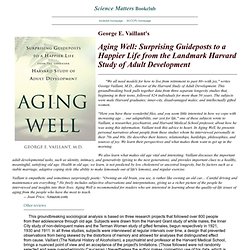 Vaillant's "We all need models for how to live from retirement to past 80--with joy," writes George Vaillant, M.D., director of the Harvard Study of Adult Development. This groundbreaking book pulls together data from three separate longevity studies that, beginning in their teens, followed 824 individuals for more than 50 years. The subjects were male Harvard graduates; inner-city, disadvantaged males; and intellectually gifted women. "Here you have these wonderful files, and you seem little interested in how we cope with increasing age ... our adaptability, our zest for life," one of these subjects wrote to Vaillant, a researcher, psychiatrist, and Harvard Medical School professor, about how he was using this information. We also learn what makes old age vital and interesting. When I'm 64 1000 Minds Survey on Retirement Savings. The Joy of Being a Woman in Her 70s. 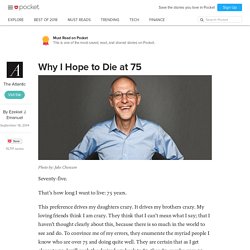 That’s how long I want to live: 75 years. This preference drives my daughters crazy. It drives my brothers crazy. My loving friends think I am crazy. A doctor and medical ethicist argues life after 75 is not worth living. In October 2014, Ezekiel Emanuel published an essay in the Atlantic called “Why I Hope to Die at 75.” 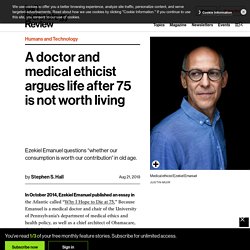 Because Emanuel is a medical doctor and chair of the University of Pennsylvania’s department of medical ethics and health policy, as well as a chief architect of Obamacare, the article stirred enormous controversy. Emanuel vowed to refuse not only heroic medical interventions once he turned 75, but also antibiotics and vaccinations. His argument: older Americans live too long in a diminished state, raising the question of, as he put it, “whether our consumption is worth our contribution.”

Humans Have Already Reached a Natural Lifespan Limit. Human beings have a natural limit to their lifespan which means it is highly unlikely anyone will ever live for more than 125 years, according to new research. 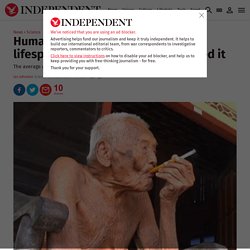 Scientists carried out a statistical analysis of the trends in the UK, US, France and Japan, the countries with the largest number of “super-centenarians” – those aged 110 or more. They found the average age at death for this group had not increased since 1968 and the chances of anyone exceeding 125 in any given year were less than one in 10,000, according to a paper in the journal Nature. “We feel that the observed trajectories are compelling and our results strongly suggest that human lifespan has a natural limit,” the researchers wrote. What Good Is Thinking About Death? In the heart of every parent lives the tightly coiled nightmare that his child will die. 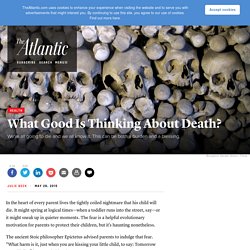 How to Deal with the End of a Life – Better Humans. Dear X, I’m sorry about your dad. 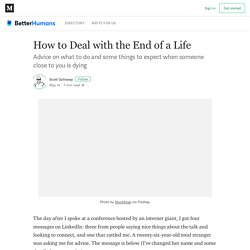 How to Prepare for the End and Love Doing It. Let’s face it, we all are experiencing a fair amount of tension and stress as we begin the new year and new decade. 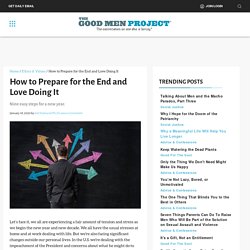 We all have the usual stresses at home and at work dealing with life. But we’re also facing significant changes outside our personal lives. In the U.S. we’re dealing with the impeachment of the President and concerns about what he might do to divert attention away from addressing the facts of his wrong-doing. I wrote an article last week titled “End Times: Is Humanity Doomed or Ready for a New Beginning?”