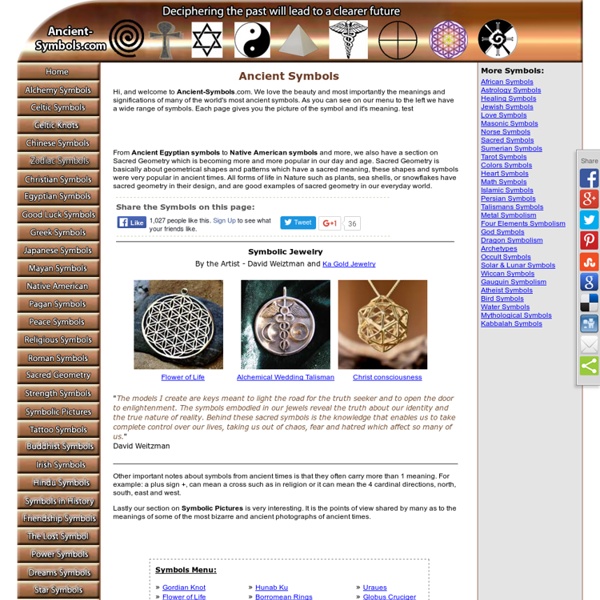 Hi, and welcome to Ancient-Symbols.com. We love the beauty and most importantly the meanings and significations of many of the world's most ancient symbols. As you can see on our menu to the left we have a wide range of symbols. Each page gives you the picture of the symbol and it's meaning. From Ancient Egyptian symbols to Native American symbols and more, we also have a section on Sacred Geometry which is becoming more and more popular in our day and age. Sacred Geometry is basically about geometrical shapes and patterns which have a sacred meaning, these shapes and symbols were very popular in ancient times.

The symbol of the Swastika and its 12,000-year-old history The swastika is a symbol used by of one of the most hated men on Earth, a symbol that represents the slaughter of millions of people and one of the most destructive wars on Earth. But Adolf Hitler was not the first to use this symbol. In fact, it was used as a powerful symbol thousands of years before him, across many cultures and continents. For the Hindus and Buddhists in India and other Asian countries, the swastika was an important symbol for many thousands of years and, to this day, the symbol can still be seen in abundance - on temples, buses, taxis, and on the cover of books. It was also used in Ancient Greece and can be found in the remains of the ancient city of Troy, which existed 4,000 years ago. The ancient Druids and the Celts also used the symbol, reflected in many artefacts that have been discovered.

The 25 Best Websites for Literature Lovers It’s an interesting relationship that book lovers have with the Internet: most would rather read a physical book than something on an iPad or Kindle, and even though an Amazon purchase is just two or three clicks away, dedicated readers would rather take a trip to their local indie bookstore. Yet the literary world occupies a decent-sized space on the web. Readers, writers, publishers, editors, and everybody in between are tweeting, Tumbling, blogging, and probably even Vine-ing about their favorite books. The Witches Alphabet – Witches Of The Craft® The Theban Alphabet History The Theban alphabet otherwise known as the witch’s alphabet or runes of Honorious is believed to have emerged in the medieval period when cabbalistic practices were prominent among European magicians. Theban was first published in a book called the Polygraphia in 1518. This book was written by Johannes Trithemius. Before the first book was published, there were other evidences of the Theban Alphabet in the 14th century.

Lewis and Short Latin-English Lexicon Lewis & Short A Latin Dictionary (1879) Logeion For most purposes, this separate database for a single dictionary should now be obsolete. You can consult all these resources together in Logeion, which contains copies of the dictionaries that are more frequently updated, and more besides: the DGE and DuCange accompany LSJ and Lewis & Short, and you will also find frequency data, collocations, and examples from the corpus. Click the link here for an example. There is even an app for your phone!

The Book of Symbols: Carl Jung’s Catalog of the Unconscious by Kirstin Butler Why Sarah Palin identifies with the grizzly bear, or what the unconscious knows but doesn’t reveal. A primary method for making sense of the world is by interpreting its symbols. We decode meaning through images and, often without realizing, are swayed by the power of their attendant associations. A central proponent of this theory, iconic Swiss psychoanalyst Carl Gustaf Jung, made an academic case for it in the now-classic Man and His Symbols, and a much more personal case in The Red Book. Beginning in the 1930s, Jung’s devotees started collecting mythological, ritualistic, and symbolic imagery under the auspices of The Archive for Research in Archetypal Symbolism (ARAS), an organization with institutes throughout the U.S.

Ten Obvious Truths About Fiction The following essay was previewed in the class that Stephen Graham Jones taught for LitReactor, Your Life Story Is Five Pages Long. 1. The reader should never have to work to figure out the basics of your story. Sun cross A sun cross (also solar cross, wheel cross) is the term for a symbol consisting of an equilateral cross inside a circle when considered as a solar symbol. The design is frequently found in the symbolism of prehistoric cultures, particularly during the Neolithic to Bronze Age periods of European prehistory. The symbol's ubiquity and apparent importance in prehistoric religion have given rise to its interpretation as a solar symbol, whence the modern English term "sun cross" (a calque of German Sonnenkreuz).

Alchemy Dictionary: Arcane Words and Ciphers To find out the meaning of a word, select the beginning letter: Or select the symbol for which you would like to see a definition: For Alchemy Lab website assistance, click ablution The process of washing a solid with a liquid, usually in water. Spiritually and psychologically, it is facing one's emotions and letting feelings flow, so that innocence and purity can be restored.