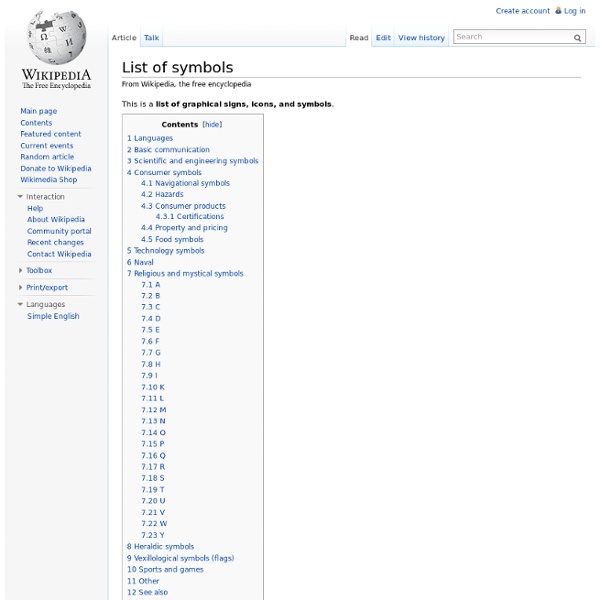 Ancient Symbols, meanings of symbols from Ancient Egyptian, Celtic, Greek, etc. Olympic symbols The Olympic symbols are icons, flags and symbols used by the International Olympic Committee to promote the Olympic Games. Some - such as the flame, fanfare, and theme - are more common during Olympic competition, but others, such as the flag, can be seen throughout the year. Motto[edit] The Olympic motto is the hendiatris Citius, Altius, Fortius, which is Latin for "Faster, Higher, Stronger." Coubertin said "These three words represent a programme of moral beauty. The Rings[edit] The five-ringed symbol of the Olympic Games. The primary symbol of the Olympic Games is composed of five interlocking rings, colored blue, yellow, black, green, and red on a white field, known as the "Olympic rings." "...the five colors [including the flag’s white background] thus combined reproduce the colors of all the nations, with no exception. The symbol's popularity and widespread use began during the lead-up to the 1936 Summer Olympics in Berlin. Flag[edit] Specific flags[edit] Antwerp flag[edit] Medals[edit]

Self-concept One's self-perception is defined by one's self-concept, self-knowledge, self-esteem, and social self. One's self-concept (also called self-construction, self-identity, or self-perspective) is a collection of beliefs about oneself[1][2] that includes elements such as academic performance,[3][4][5][6][7] gender roles and sexuality,[8][9][10] and racial identity.[11] Generally, self-concept embodies the answer to "Who am I?".[12] One's self-concept is made up of self-schemas, and their past, present, and future selves. Self-concept is made up of one's self-schemas, and interacts with self-esteem, self-knowledge, and the social self to form the self as whole. The perception people have about their past or future selves is related to the perception of their current selves. History[edit] Psychologists Carl Rogers and Abraham Maslow were the first to establish the notion of self-concept. Model[edit] Development[edit] Researchers debate over when self-concept development begins. Media[edit]

www.math.rutgers.edu/~lenci/jokes/chicken WHY DID THE CHICKEN CROSS THE ROAD? Plato: For the greater good. Karl Marx: It was a historical inevitability. Machiavelli: So that its subjects will view it with admiration, as a chicken which has the daring and courage to boldly cross the road, but also with fear, for whom among them has the strength to contend with such a paragon of avian virtue? In such a manner is the princely chicken's dominion maintained. Hippocrates: Because of an excess of light pink gooey stuff in its pancreas.

symboldictionary.net Logo A logo (abbr. of logotype,[1] from Greek: λόγος logos - word, idea + Greek: τύπος typos - imprint, picture) is a graphic mark or emblem commonly used by commercial enterprises, organizations and even individuals to aid and promote instant public recognition. Logos are either purely graphic (symbols/icons) or are composed of the name of the organization (a logotype or wordmark). History[edit] Numerous inventions and techniques have contributed to the contemporary logo, including cylinder seals (c.2300 BCE), coins (c.600 BCE),[3][4] trans-cultural diffusion of logographic languages, coats of arms,[5] watermarks, silver hallmarks and the development of printing technology. As the industrial revolution converted western societies from agrarian to industrial in the 18th and 19th centuries, photography and lithography contributed to the boom of an advertising industry that integrated typography and imagery together on the page. The First logo to be trademarked was the Bass red triangle in 1876

List of idioms in the English language This is a list of notable idioms in the English language. An idiom is a common word or phrase with a culturally understood meaning that differs from what its composite words' denotations would suggest. For example, an English speaker would understand the phrase "kick the bucket" to mean "to die" – and also to actually kick a bucket. Furthermore, they would understand when each meaning is being used in context. Visit Wiktionary's Category for over eight thousand idioms. See also[edit] References[edit] Jump up ^ "A bitter pill". Notes[edit] Jump up ^ Originally a hunting term.Jump up ^ Originally a British slang term for a quadruple amputee during World War I.Jump up ^ Originating with the English writer Francis Quarles who wrote:"Wee spend our mid-day sweat, or mid-night oyle;Wee tyre the night in thought; the day in toyle."

Doublethink and the Mental Construction of Reality The following is excerpted from the upcoming book All These Serious Faces Will Only Drive You Mad. This is the third excerpt to appear on Reality Sandwich. Read excerpt 1 here, 2 here, 4 here. To learn more about the book, please click here. The concept of truth-seeking has long been a cornerstone of individualism. But in order to be effective as individuals, we have to make sure that our perception of reality actually contains a significant amount of what we call "truth." To determine that, we must look at how the human mind arrives at a sense of understanding the world. In Korzybski's terminology, human communication evolved through "extension," while aristotelian orientations (i.e., those with roots in Aristotle's philosophy and logic) are based on "intension." Aristotle can't be blamed entirely for this state of affairs; it's also due to the nature of language itself. To fully comprehend this, it helps to go outside Western thought altogether.

UNG Project | Free Cloud Alliance The information below concerns the UNG 1.0 project, for current efforts, see the UNG 2.0 project. The UNG project intends to provide a complete alternative to proprietary cloud computing solutions, starting from enterprise applications and ending with search engines. The current development focus is Web Office and Web Groupware. We invite all Javascript developers to help the UNG project by improving community projects which have been select for UNG. screenshot of the first prototype of UNG Docs The table bellow provides an overview of the status of UNG. Ready means that it is already used by mission critical projects Prototype means that it is already used by a few people Proof of concept means that a demo what produced based on which development can start Design concept means that ideas for a proof of concept exist The UNG Docs project has been officially presented during the Open World Forum in Paris, in November 22th. Releases: Instructions to install them over ERP5 will come soon.

Dokkōdō The "Dokkōdō" [ (Japanese: 独行道?); "The Path of Aloneness", "The Way to Go Forth Alone", or "The Way of Walking Alone"] is a short work written by Miyamoto Musashi (宮本 武蔵) a week before he died in 1645. It consists of either nineteen or twenty-one precepts; precepts 4 and 20 are omitted from the former version. "Dokkodo" was largely composed on the occasion of Musashi giving away his possessions in preparation for death, and was dedicated to his favorite disciple, Terao Magonojō (to whom the earlier Go rin no sho [The Book of Five Rings] had also been dedicated), who took them to heart. Precepts[edit] References[edit]