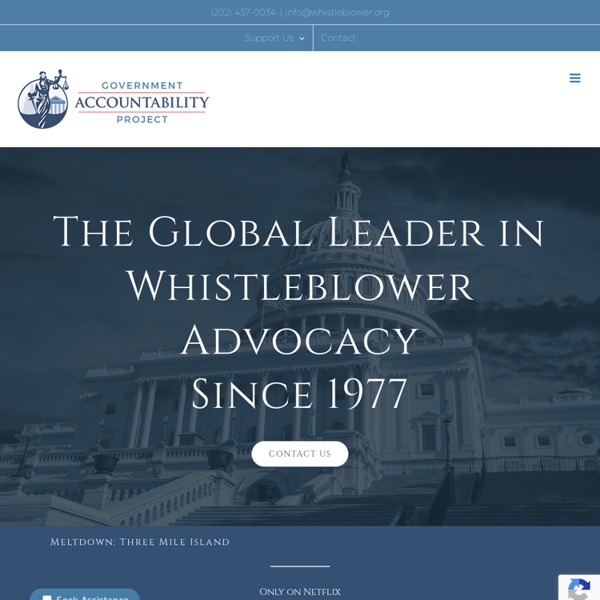 ICANNWatch internationalassociationofwhistleblowers.net GovTrack.us: Tracking the U.S. Congress THE FOOD NOT BOMBS MOVEMENT Consumer Reports WebWatch: The leader in investigative reporting on credibility and trust online Consumer Reports Web Watch was, until 2009, the Internet integrity division of Consumer Reports. The project was funded by grants from the Pew Charitable Trusts, the John S. and James L. Knight Foundation, and the Open Society Institute. We assisted Consumer Reports’ editorial division in evaluating the credibility of Web sites, we investigated Web sites on behalf of consumers, and we advocated for consumer-focused Internet policy and governance. While ConsumerWebWatch.org is no longer a stand alone website, the work is still being done. Consumer Reports has incorporated the webwatch research role into its regular reports published on ConsumerReports.org. HearUsNow.org handles advocacy on behalf of internet consumers, covering such issues as web tracking, data mining,and emerging issues around bundled services, “crammed” charges, data overages and much more.

Want to know the truth? Verifiable information on banking, health, energy, media, war, elections, 9/11, more Participatory Politics Foundation 38 Words and Phrases to Avoid in Your Proposals Here is a list of words and phrases that you should not use in your proposals and the reasons why. We see them all the time. Sometimes authors use them out of habit. Sometimes they use them because they think it’s okay to use empty assertions when you are writing sales copy. Members get access to the following related articles: 22 Things You Must Have to Win Your Next Proposal Why what you learned in school about writing was wrong 10 Mistakes That Proposal Writers Make Again, and Again, and Again… How to go beyond mere compliance Questions to answer in your proposal 101 Win Themes For All Occasions In addition to all of our tutorials, online training, and process documentation, 263 articles like this are available to our paid members. Click here for more free articles like this one

Religious Right Alert National Security Whistleblowers Coalition Super Congress Debt Reduction Has Little Transparency WASHINGTON -- The proposed so-called "super Congress," created by congressional leaders in the debt deal and required to find $1.5 trillion in debt reduction over the next ten years, could wind up making those decisions behind closed doors, away from the public eye. The text of the budget deal reached by President Barack Obama and congressional leaders contains few specific public disclosure provisions for the committee. The standing committees of Congress are allowed to send suggestions for ways to reduce the debt to the super committee members, but there is, as yet, no provision for the disclosure of those reports. The final report is required to be publicly disclosed upon completion, however there is no requirement that the report be placed online. There are also no official requirements for web-casting of committee meetings. "Anything that they are getting should be made public," Steve Ellis, vice president of Taxpayers for Common Sense, said to HuffPost.