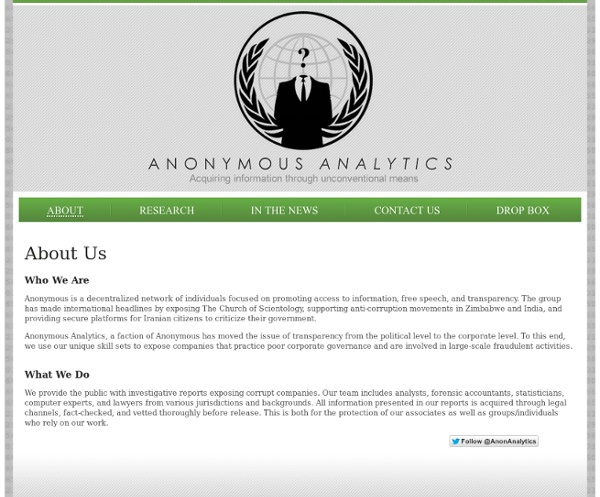 Anonymous is a decentralized network of individuals focused on promoting access to information, free speech, and transparency. The group has made international headlines by exposing The Church of Scientology, supporting anti-corruption movements in Zimbabwe and India, and providing secure platforms for Iranian citizens to criticize their government. Anonymous Analytics, a faction of Anonymous has moved the issue of transparency from the political level to the corporate level. To this end, we use our unique skill sets to expose companies that practice poor corporate governance and are involved in large-scale fraudulent activities. We provide the public with investigative reports exposing corrupt companies. Our team includes analysts, forensic accountants, statisticians, computer experts, and lawyers from various jurisdictions and backgrounds.

NBC Affiliate KMIR Reports on Chemtrails/Geoengineering KMIR, the NBC affiliate in Palm Springs, CA has recently aired a segment on chemtrails/geoengineering. I picked up the coverage at the kaua’i sky blog. Here is a great opportunity for some Quantum Activism. If you’ve got the time and interest, consider contacting KMIR to thank them for their coverage, and to continue reporting on this topic. AnonOps Communications One account. All of Google. Sign in to continue to Blogger Find my account How to Make a Bug Out Bag Editor’s note: This is a guest post from Creek Stewart of Willow Haven Outdoor. The term ‘Bugging Out’ refers to the decision to abandon your home due to an unexpected emergency situation–whether a natural disaster or one caused by man. A ‘Bug Out Bag’ is a pre-prepared survival kit designed to sustain you through the journey to your destination once you’ve decided to ‘Bug Out’ in the event of an emergency evacuation. Typically, the Bug Out Bag (BOB) is a self-contained kit designed to get you through at least 72 hours. This kit is also referred to as a 72-Hour Bag, a Get Out Of Dodge Bag (GOOD Bag), an EVAC Bag, and a Battle Box. The thought of having to evacuate your home due to a sudden and imminent threat is not at all unrealistic.

VIDEO: Minister Farrakhan: 'That's a Murderer in the White House' Minister Louis Farrakhan (Getty Images) A YouTube video of Minister Louis Farrakhan taking President Obama to task over the war in Afghanistan and the bombing of Libya is making its way around the Web. In the video, Farrakhan admonishes the president for turning into someone else. Farrakhan says, "We voted for our brother Barack, a beautiful human being with a sweet heart, and now he's an assassin. They turned him into them." He also raises the issue of killing Saddam Hussein over weapons of mass destruction and knowingly sending young men to fight a war based on lies.

Vanishing Point: How to disappear in America without a trace Where there's water, life is possible. True, it may be very difficult and very hard to live, depending, but anyone who's driven, hiked, or camped in the American South West will have noticed that cities and ranches crop up where there's surface water or where there's been a well dug. Within the state of California, Nevada, Arizona, Utah, New Mexico, and Colorado, there are deserts, mesas, mountains, and forests where normally people never or rarely visit; not-so-secret places where there's water, access to a road within a day's hike, and where a fairly rugged individual may hide while remaining basically healthy, marginally well fed, and reasonably sane. In this section I'll look at two such environments, neither of which I would recommend, but one of which I'd suggest is a reasonable way to live in basic health while either on the run, hiding out from the law, old girl friends, the draft for an illegal war, putative wives and such. Where exactly?

12 Things That The Mainstream Media Is Being Strangely Quiet About Right Now As the mainstream media continues to be obsessed with Anthony Weiner and his bizarre adventures on Twitter, much more serious events are happening around the world that are getting very little attention. In America today, if the mainstream media does not cover something it is almost as if it never happened. Right now, the worst nuclear disaster in human history continues to unfold in Japan , U.S. nuclear facilities are being threatened by flood waters, the U.S. military is bombing Yemen, gigantic cracks in the earth are appearing all over the globe and the largest wildfire in Arizona history is causing immense devastation. But Anthony Weiner, Bristol Palin and Miss USA are what the mainstream media want to tell us about and most Americans are buying it. In times like these, it is more important than ever to think for ourselves.

Watch the Mexican border 24/7 from home Four "strategic crossing points" that you can watch 24/7 on Blue Servo from home. A group of crime-busting Texan sheriffs has launched an online surveillance system that makes it possible for the public to watch the Mexican border on CCTV 24 hours a day. Since its launch last Thursday... nothing has happened. So what's the point? It's taken two years to get funding for the advanced neighbourhood watch scheme, resulting in a public-private partnership with an until now unheard of company called BlueServo and a generous $2m donation from the Governor of Texas, Rick Perry. When a beady-eyed visitor spots something untoward, an alert is sent to The Texas Border Sheriff Coalition, who then decides whether to take action.

Applause For Finland: First Country To Make Broadband Access A Legal Right Kudos to the Finnish government, which has just introduced laws guaranteeing broadband access to every person living in Finland (5.5 million people, give or take). This is reportedly a first worldwide. Starting July 2010, every person in Finland will have the right to a one-megabit broadband connection as an intermediate step, says the Ministry of Transport and Communications. By the end of 2015, the legal right will be extended to an impressive 100 Mb broadband connection for everyone. According to Wikipedia, approximately 79 percent of the Finnish population use the Internet. Finland had around 1.52 million broadband Internet connections by the end of June 2007 or around 287 per 1,000 inhabitants.

Freedom of information legislation Freedom of information laws (FOI laws) allow access by the general public to data held by national governments. They establish a "right-to-know" legal process by which requests may be made for government-held information, to be received freely or at minimal cost, barring standard exceptions. Also variously referred to as open records, or sunshine laws (in the United States), governments are also typically bound by a duty to publish and promote openness. In many countries there are constitutional guarantees for the right of access to information, but usually these are unused if specific support legislation does not exist.