How Attorney General Eric Holder Colluded With Bank Of America To Destroy Wikileaks And Silence Unfriendly Journalists, Including Glenn Greenwald 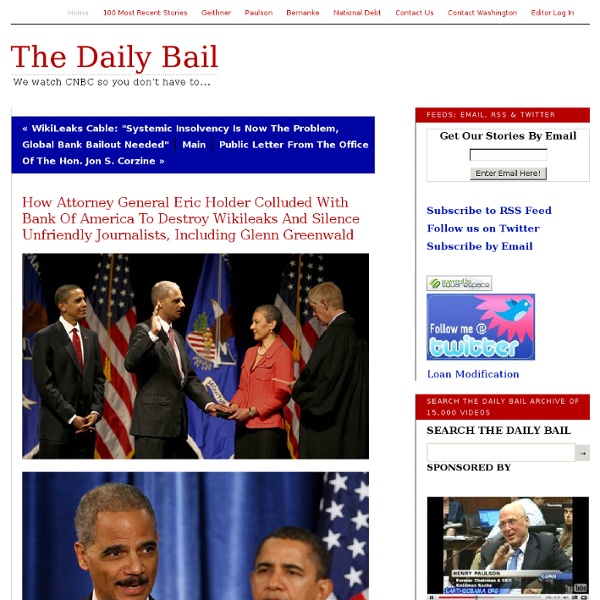 Note: This story was published by Wikileaks via Twitter to their 800,000 followers. In light of the Assange speech this weekend, we are reposting several Wikileaks stories. When we wrote a few weeks ago about Eric Holder, Wikileaks and Bank of America, we focused on the irony of the U.S. Why hasn't Eric Holder asked to see the evidence, which Wikileaks claims to have, that executives at one of our largest banks may have committed serious crimes? Let's be honest, Holder doesn't really give a rip about financial crimes, but the media should at least be asking him why he doesn't want to see the evidence. For some reason, Holder and the rest of the Obama administration would rather endanger our Constitutional rights to due process and a free press by persecuting journalists on specious charges, than to actually do their job and enforce the law. However, new information has surfaced that shines a whole new light on the situation. But one bit of information has been largely overlooked: Related:  WIKILEAKS PHENOMENA • 1% • Fascism and the Security State

U.S.-Chile Documents By Peter Kornbluh National Security Archive Electronic Briefing Book No. 8 For more information contact: Peter Kornbluh 202/994-7000 or nsarchiv@gwu.edu Washington, D.C. – September 11, 1998 marks the twenty-fifth anniversary of the military coup led by General Augusto Pinochet. Revelations that President Richard Nixon had ordered the CIA to "make the economy scream" in Chile to "prevent Allende from coming to power or to unseat him," prompted a major scandal in the mid-1970s, and a major investigation by the U.S. These documents include: Cables written by U.S. These documents, and many thousands of other CIA, NSC, and Defense Department records that are still classified secret, remain relevant to ongoing human rights investigations in Chile, Spain and other countries, and unresolved acts of international terrorism conducted by the Chilean secret police. Click on the to view each document. FBI, Directorate of National Intelligence (DINA), January 21, 1982 Department of Defense, U.S.

Six Jewish Companies Control 96% of the World’s Media Six Jewish Companies Control 96% of the World’s Media The power of lies, deceptions and disinformation as Americans pay the price of collective stupidity. “You know very well, and the stupid Americans know equally well, that we control their government, irrespective of who sits in the White House. You see, I know it and you know it that no American president can be in a position to challenge us even if we do the unthinkable. What can they (Americans) do to us? We control congress, we control the media, we control show biz, and we control everything in America. Facts of Jewish Media Control The largest media conglomerate today is Walt Disney Company, whose chairman and CEO, Michael Eisner, is a Jew. This corporation also has a controlling share of Lifetime Television and the Arts & Entertainment Network cable companies. The chairman of the board and CEO, Gerald Levin, is a Jew. It distributes videos through over 4,000 Blockbuster stores. This is still the case today. Other Mass Media Part 1

WikiLeaks spokesman wins Journalist of the Year in Iceland WikiLeaks spokesman Kristinn Hrafnsson Icelandic journalist and WikiLeaks spokesman Kristinn Hrafnsson won the country’s Journalist of the Year award for 2010, Iceland’s National Union of Journalists said. “Kristinn said when receiving the award that this was the third time he was getting an award for outstanding work in journalism, but that he had also been fired three times for his work,” NUJ official Frida Bjornsdottir said. The NUJ revealed its pick of Mr Hrafnsson, “for excellent processing of a video of a helicopter attack in Baghdad” and “for his work as a representative for WikiLeaks, an organization that has cooperated with many of the world’s major journalistic entities by publishing important information,” the NUJ said in a statement. WikiLeaks released in April last year a graphic video of a US military Apache helicopter strike in Baghdad in 2007 which killed two Reuters employees and a number of other people.

"Disclosure's Effects: WikiLeaks and Tran" by Mark Fenster Mark Fenster, University of Florida Abstract Constitutional, criminal, and administrative laws regulating government transparency, and the theories that support them, rest on the assumption that the disclosure of information has transformative effects: disclosure can inform, enlighten, and energize the public, or it can create great harm or stymie government operations. This article studies WikiLeaks in order to question and evaluate prevailing laws and theories of transparency that build on the assumption that disclosure’s effects are predictable, calculable, and capable of serving as the basis for adjudicating difficult cases. Suggested Citation Mark Fenster.

What Neocons Want from Ukraine Crisis Source: Consortium News President Barack Obama discusses the crisis in Ukraine for 90 minutes on March 1, 2014, with Russian President Vladimir Putin.(image by (White House photo/Pete Souza)) President Barack Obama has been trying, mostly in secret, to craft a new foreign policy that relies heavily on cooperation with Russian President Vladimir Putin to tamp down confrontations in hotspots such as Iran and Syria. But Obama's timidity about publicly explaining this strategy has left it open to attack from powerful elements of Official Washington, including well-placed neocons and people in his own administration. Though I'm told the Ukraine crisis caught both Obama and Putin by surprise, the neocon determination to drive a wedge between the two leaders has been apparent for months, especially after Putin brokered a deal to head off U.S. military strikes against Syria last summer and helped get Iran to negotiate concessions on its nuclear program. The Rise of Obama

Mind-boggling I’m astonished by those who say we shouldn’t be taking the WikiLeaks leaks seriously. Why ever not? They are not rumors, they are not speculations, they are not theories. And nothing could be more compromising. I did say a couple of months ago when we were saber-rattling over the Spratlys that it was all well and good that we had discovered feistiness and assertiveness in the face of a bullying neighbor, an emergent world economic superpower if not a certified political one, but that it would be even finer and better if we could do the same thing vis-à-vis a certified world political superpower, if a patently declining economic one, that had been bullying us for more than a hundred years. Long before we started to show an inclination to “embrace the dragon,” as Francis Ricciardone warned about years ago, a thing we got to know as well from WikiLeaks, we had been embracing the eagle. That’s the truly mind-boggling thing about the WikiLeaks leaks. Truly, mind-boggling.

The Masonic New World Order The Masonic New World Order Masonic Foundations of the United States Great Seal of the United States Masonic Architecture of Washington, D.C. British Freemasonry's Plan for America George Washington Masonic National Memorial George Washington's Correspondence Masonic Foundations Of The United States The Lubavitch Resolution (H.J. Interestingly, both ministers are members of the Council for National Policy, a secret organization which includes among its 400+ members numerous Christian ministry leaders, various members of Scottish Rite Freemasonry of high degree, including Jesse Helms and Jack Kemp, Senator Trent Lott, Rep. The Founding Fathers It is certain that there were Christians among the founding fathers of the United States, however, historical evidence militates against the view that those who formulated the fundamental documents of American government were, in the main, Christians. From American Masonic History - What Are America's True Roots? The U.S.

Wikileaks Fails “Due Diligence” Review In the past week, both the Washington Post and the New York Times have referred to WikiLeaks.org, the web site that publishes confidential records, as a “whistleblower” site. This conforms to WikiLeaks’ own instructions to journalists that “WikiLeaks should be described, depending on context, as the ‘open government group’, ‘anti-corruption group’, ‘transparency group’ or ‘whistleblower’s site’.” But calling WikiLeaks a whistleblower site does not accurately reflect the character of the project. It also does not explain why others who are engaged in open government, anti-corruption and whistleblower protection activities are wary of WikiLeaks or disdainful of it. And it does not provide any clue why the Knight Foundation, the preeminent foundation funder of innovative First Amendment and free press initiatives, might have rejected WikiLeaks’ request for financial support, as it recently did. On occasion, WikiLeaks has engaged in overtly unethical behavior.

The Judicial Lynching of Bradley Manning - Chris Hedges' Columns The Judicial Lynching of Bradley Manning Posted on Jun 9, 2013 By Chris Hedges FORT MEADE, Md.—The military trial of Bradley Manning is a judicial lynching. The government has effectively muzzled the defense team. Manning is also barred from presenting to the court his motives for giving the website WikiLeaks hundreds of thousands of classified diplomatic cables, war logs from Afghanistan and Iraq, and videos. The draconian trial restrictions, familiar to many Muslim Americans tried in the so-called war on terror, presage a future of show trials and blind obedience. Coombs opened the trial last week by pleading with the judge, Army Col. Manning is unable to appeal to the Nuremberg principles, a set of guidelines created by the International Law Commission of the United Nations after World War II to determine what constitutes a war crime. “He knew that the video depicted a 2007 attack,” Coombs said of the “Collateral Murder” recording. Get truth delivered to your inbox every week.

Putin, George Bush Sr., Saudi King Abdullah and Venezuela’s Chavez all reported ill during same week; Big oil involved December 3, 2012 Last week there were a flurry of reports, all officially denied, that George Bush Sr., President Vladimir Putin of Russia, King Abdullah of Saudi Arabia and President Cesar Chavez of Venezuela were all suffering from serious health problems. Bush: Putin: Abdullah: Chavez: Most intriguing of all is the article in the Houston Chronicle, linked in the widely read Drudge Report, about Bush’s health. Like this: Like Loading...