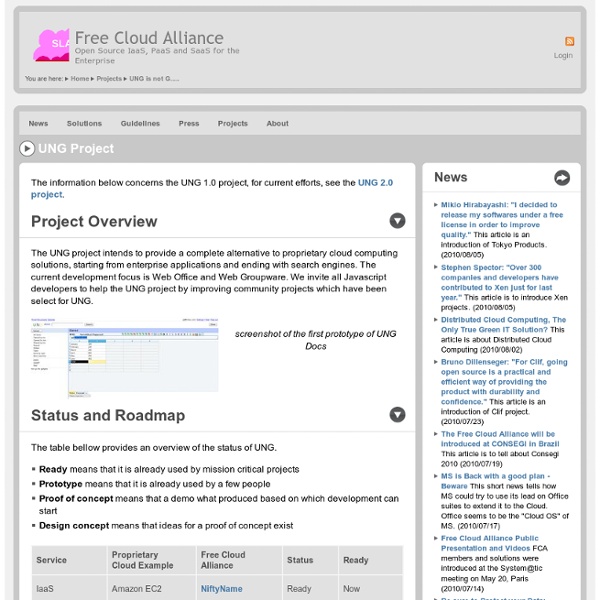 The information below concerns the UNG 1.0 project, for current efforts, see the UNG 2.0 project. The UNG project intends to provide a complete alternative to proprietary cloud computing solutions, starting from enterprise applications and ending with search engines. The current development focus is Web Office and Web Groupware. screenshot of the first prototype of UNG Docs The table bellow provides an overview of the status of UNG. Ready means that it is already used by mission critical projects Prototype means that it is already used by a few people Proof of concept means that a demo what produced based on which development can start Design concept means that ideas for a proof of concept exist The UNG Docs project has been officially presented during the Open World Forum in Paris, in November 22th. Releases: 0.1 (2010-11-22) 0.2 (2011-01-19) 0.3 (2011-02-04) UNG Docs 1.0 - Press Release (2011-05-11) Instructions to install them over ERP5 will come soon.

Wikileaks | Wikipedia During the 2016 US presidential election campaign, WikiLeaks released emails and other documents from the Democratic National Committee and from Hillary Clinton's campaign manager, John Podesta.[14] These releases caused significant harm to the Clinton campaign,[citation needed] and have been attributed as potential contributing factors to her loss.[15] The U.S. intelligence community expressed "high confidence" that the leaked emails had been hacked by Russia and supplied to WikiLeaks, while WikiLeaks denied their source was Russia or any other state.[16] During the campaign, WikiLeaks promoted conspiracy theories about Hillary Clinton and the Democratic Party.[17][18][19] In private conversations from November 2015 that were later leaked, Julian Assange expressed a preference for a GOP victory in the 2016 election, explaining that "Dems+Media+liberals woudl [sic] then form a block to reign [sic] in their worst qualities. History Staff, name and founding Purpose Administration Financing