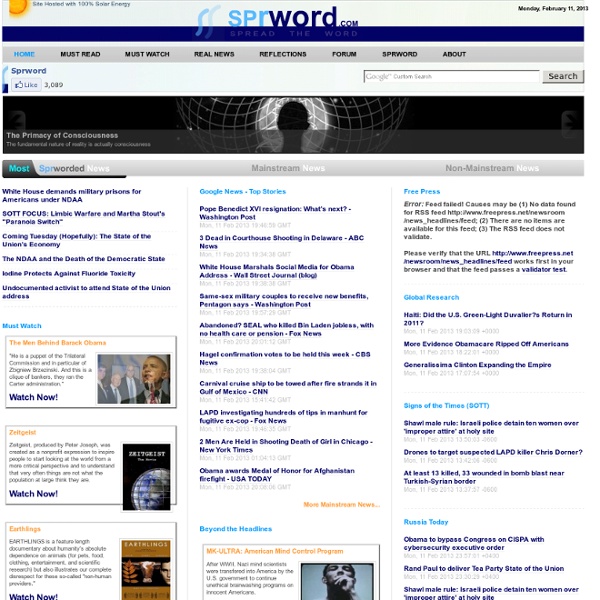 Natural Communities Magazine For those who want to know: Reliable information on health, energy, media, war, elections, 9/11, more Brave New Worldview – 30 Science Fiction Films of the 21st Century - Row Three A decade into the 21st Century and we have arrived at the future. The promise of Tomorrow. But instead we have looming energy crises, endless middle east conflict and more disappointing, we have no flying cars, Heck, for all the bright and clean future promised in 2001: A Space Odyssey, none of the real companies used as brands in the film even exist anymore. Even moving from the late 1960s to the mid 1980s, nobody makes DeLoreans (although they occasionally sell on Ebay), but cloning and tablet computing (as promised by Star Trek: The Next Generation) have more or less come to pass in this century. Below are over two dozen science fiction pictures that are worth your time. In the interest of talking about the films, it should be noted that *SPOILERS* are sprinkled through out the list. Code 46 Welcome to a world with borders, very difficult to permeate borders. Children of Men How would social mores change in a world without hope? The Fountain 28 Weeks Later The Host Paprika Pontypool

DRUDGE REPORT 2011? Adbusters Culturejammer Headquarters | Journal of the mental environment Top 10 Shocking Documentaries Movies and TV As a visual medium, documentaries frequently succeed in portraying the unimaginable far better then any book alone could do. Beaming everything from the consequences of child abuse to the horrors of nuclear warfare into the homes of millions, the following infamous documentaries shock the viewer and challenge perceptions. High on Crack Street Following the struggle of three crack addicts, ‘High on Crack Street’ digs deep into the complex daily lives of individuals striving to obtain their next fix. Aokigahara / Suicide Forest Lying at the base of Mount Fuji, Aokigahara Forest has a rather unsettling reputation as a suicide hotspot . Vicious, ruthless, remorseless, brutal, fearless, violent, disturbed and callous are just some of the words which can be used to describe serial contract killer Richard “The Iceman” Kuklinski. Nuit et Brouillard The Killing of America Interview with a Cannibal What drives a man to kill and cannibalize an innocent woman? Bulgaria’s Abandoned Children