Gasland: A film by Josh Fox 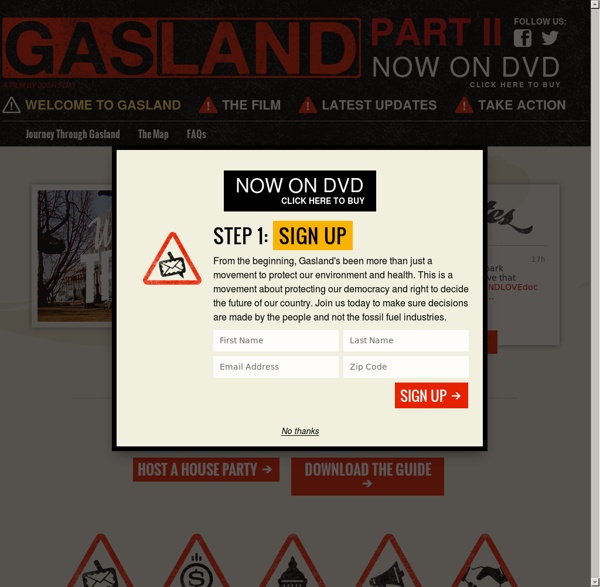 CONFIRMED - Link Between Fracking and Earthquakes By. John C.K. Daly of Oilprice.com On 5 November 2011 an earthquake measuring 5.6 rattled Oklahoma and was felt as far away as Illinois. Until two years ago Oklahoma typically had about 50 earthquakes a year, but in 2010, 1,047 quakes shook the state. Why? News about Fracking or Hydraulic Fracturing, Mining, and Drilling in PA's Marcellus Shale Study: Frack Fluids Could Contaminate Aquifers Much Sooner Than We Thought Abrahm Lustgarten: Scientists have theorized that impermeable layers of rock would keep the fluid, which contains benzene and other dangerous chemicals, safely locked nearly a mile below water supplies. This view of the earth’s underground geology is a cornerstone of … More after the jump Vote Count for Fracking Impact Fee Just Got Tougher Bad news for the Republicans’ “impact fee” on fracking: Joe Scarnati is Reading His Keystone Politics

An Abundance Of Extreme Weather Has Many On Edge Hide caption People in Takoma Park, Md., walk toward a fallen telephone pole on June 30 after heavy overnight thunderstorms devastated the Washington, D.C., metropolitan area. The line of storms known as a derecho left over 1 million people without power. Kevin Dietsch/UPI/Landov Hide caption Rain clouds move over the remnants of parched cornstalks on Aug. 22 near Wiley, Colo. A summer storm came too late to help farmers whose crops were decimated in the wide zone of exceptional drought in Colorado's eastern plains. John Moore/Getty Images Hide caption Waves crash over Winthrop Shore Drive in Winthrop as Hurricane Sandy comes up the Massachusetts coast on Oct. 29. Darren McCollester/Getty Images Hide caption A parking lot full of yellow taxis is flooded as a result of Hurricane Sandy on Oct. 30 in Hoboken, N.J.

Project on Climate Change Communication April 09 2014 | Research Reports New Commentary Urges Climate Scientists to “Set the Record Straight” We just published a commentary in Earth’s Future, a new online, open-access journal published by the American Geophysical Union. The commentary is entitled: “Climate Scientists Need to Set the Record Straight: There is a scientific consensus that human-caused climate change is happening.” In the commentary, we argue that the climate science community needs to do more to communicate the scientific consensus because: (a) most Americans don’t know there is a scientific consensus on this point; (b) this lack of awareness undermines people’s engagement in the issue; and (c) research by our team – and others – has shown that simple messages that communicate this basic scientific conclusion are highly effective, especially with political conservatives.

Shale Gas in Europe Archives - Shale Gas : Shale Gas Shale Gas and EU Energy Security 11 December 2014 The European Parliamentary Research Service’s report Shale Gas and EU Energy Security aims to advise MEPs of... Read more Shale gas in Europe position paper 13 November 2014 International Association of Oil & Gas Producers’s (IOGP) position paper on Shale gas in Europe suggests that... Terry Engelder on shale gas: The good, the bad and the decline curves How safe are the shale gas wells that are springing up around parts of the United States? And how well will they pay off for the increasingly large investments that are going into them? Late last month I spoke to Terry Engelder, professor of geosciences at Pennsylvania State University and an expert in shale formations about these rather controversial aspects of shale gas, and more. As with many topics in the energy world, shale gas elicits rather polarised opinions. There are those who say it will neatly reduce emissions and solve energy security problems in one fell swoop. Others believe that some issues around pollution and yield have not yet been resolved.