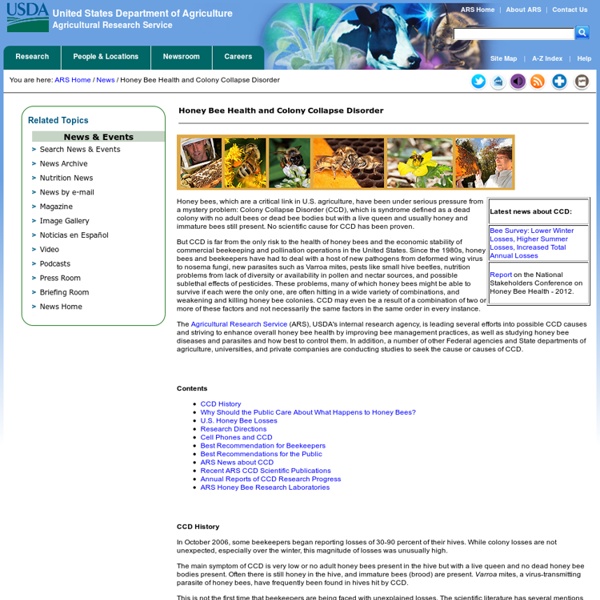 Honey bees, which are a critical link in U.S. agriculture, have been under serious pressure from a mystery problem: Colony Collapse Disorder (CCD), which is syndrome defined as a dead colony with no adult bees or dead bee bodies but with a live queen and usually honey and immature bees still present. No scientific cause for CCD has been proven. But CCD is far from the only risk to the health of honey bees and the economic stability of commercial beekeeping and pollination operations in the United States. Since the 1980s, honey bees and beekeepers have had to deal with a host of new pathogens from deformed wing virus to nosema fungi, new parasites such as Varroa mites, pests like small hive beetles, nutrition problems from lack of diversity or availability in pollen and nectar sources, and possible sublethal effects of pesticides. Contents CCD History In October 2006, some beekeepers began reporting losses of 30-90 percent of their hives. There have also been unusual colony losses before. Related:  Actualités anglophones • Veille USDA concernant l'apiculture • Bees

UNIVERSITY OF CALIFORNIA SAN FRANCISCO 07/06/11 UCSF Finds New Bee Viruses, Offers Baseline to Study Colony Collapse Working in the lab, from left, are Michelle Flenniken, a postdoctoral scholar, Joseph DeRisi, PhD, a Howard Hughes Medical Institute investigator and professor of biochemistry and biophysics at UCSF, and Charles Runckel, a graduate student. A 10-month study of healthy honey bees by University of California, San Francisco (UCSF) scientists has identified four new viruses that infect bees, while revealing that each of the viruses or bacteria previously linked to colony collapse is present in healthy hives as well. The study, which followed 20 colonies in a commercial beekeeping operation of more than 70,000 hives as they were transported across the country pollinating crops, was conducted to answer one basic question: what viruses and bacteria exist in a normal colony throughout the year? The results depict a distinct pattern of infections through the seasons and provide a normal baseline for researchers studying a colony – the bee population within a hive – that has collapsed.

ARS USDA 12/08/09 Pathogen Loads Higher in Bee Colonies Suffering from Colony Collapse Disorder By Kim KaplanAugust 12 , 2009 A higher total load of pathogens—viruses, bacteria and fungi—appears to have the strongest link with Colony Collapse Disorder found so far, according to a new study published by Agricultural Research Service (ARS) and university scientists. The study was headed by Pennsylvania State University entomologist Dennis vanEngelsdorp and entomologist Jeff Pettis, geneticist Jay Evans and virologist Yanping Chen with the ARS Bee Research Laboratory in Beltsville, Md. They looked at more than 200 individual variables in 91 colonies from 13 apiaries in Florida and California, where many beekeepers overwinter their honey bees. Among the factors for which the researchers screened were bacteria, mites, Nosema (protozoan parasites), numerous viruses, nutrition status and 171 pesticides. Among the colonies that had CCD, no single pathogen among those screened had a higher prevalence. ARS is the principal intramural scientific research agency of the U.S.

You Asked: Are the Honeybees Still Disappearing? | TIME From almonds to cherries, dozens of food crops are partially or totally dependent on honeybee pollination. And while media attention has waned, there’s still reason to worry about the country’s smallest and most indispensable farm workers. Bee researchers first reported massive die-offs back in the 1990s. But the plight of the honeybee didn’t truly buzz into the national consciousness until the spring of 2013, when data revealed the average beekeeper had lost 45% of her colonies the previous winter. A mysterious phenomenon known as colony collapse disorder (CCD) further stoked the fires of public interest. Jump to 2015. You Asked: Your Top 10 Health Questions Answered Illustration by Peter Oumanski for TIME Dr. Varroa mites, properly (and frighteningly) named Varroa destructor, likely migrated to the U.S. sometime in the 1980s. Of the two other major bee-killers vanEngelsdorp listed, pesticides have arguably gotten the most press—especially a commonly used category called neonicotinoids.

Death of the Bees. Genetically Modified Crops and the Decline of Bee Colonies in North America This article was originally published by Global Research in March 2008 Commercial beehives pollinate over a third of [North}America’s crops and that web of nourishment encompasses everything from fruits like peaches, apples, cherries, strawberries and more, to nuts like California almonds, 90 percent of which are helped along by the honeybees. Without this pollination, you could kiss those crops goodbye, to say nothing of the honey bees produce or the flowers they also fertilize’.1 This essay will discuss the arguments and seriousness pertaining to the massive deaths and the decline of Bee colonies in North America. As well, it will shed light on a worldwide hunger issue that will have an economical and ecological impact in the very near future. Genetically modified seeds are produced and distributed by powerful biotech conglomerates. I will argue that the media reports tend to distract public opinion from the true cause which underlies the destruction of bee colonies. Conclusion: Ho, Dr.

ARS USDA 23/05/11 USDA/AIA Survey Reports 2010/2011 Winter Honey Bee Losses By Kim KaplanMay 23, 2011 WASHINGTON — Total losses from managed honey bee colonies nationwide were 30 percent from all causes for the 2010/2011 winter, according to the annual survey conducted by the U.S. Department of Agriculture (USDA) and the Apiary Inspectors of America (AIA). This is roughly similar to total losses reported in similar surveys done in the four previous years: 34 percent for the 2009/2010 winter, 29 percent for 2008/2009; 36 percent for 2007/2008, and 32 percent for 2006/2007. "The lack of increase in losses is marginally encouraging in the sense that the problem does not appear to be getting worse for honey bees and beekeepers," said Jeff Pettis, an entomologist with USDA's Agricultural Research Service (ARS) who helped conduct the study. The survey, which covered the period from October 2010 to April 2011, was led by Pettis and by AIA past presidents Dennis vanEngelsdorp and Jerry Hayes. Average colony loss for an individual beekeeper's operation was 38.4 percent.

Varroa destructor Varroa destructor is an external parasitic mite that attacks the honey bees Apis cerana and Apis mellifera. The disease caused by the mites is called varroosis. Varroa destructor can only reproduce in a honey bee colony. Physical description[edit] The adult mite is reddish-brown in color; has a flat, button shape; is 1–1.8 mm long and 1.5–2 mm wide; and has eight legs. Reproduction, infection and hive mortality[edit] The adults suck the "blood" (hemolymph) of adult honey bees for sustenance, leaving open wounds. The model for the population dynamics is exponential growth when bee brood are available and exponential decline when no brood is available. Low temperature scanning electron micrograph of V. destructor on a honey bee host Varroa destructor on bee larva Introduction around the world[edit] As of mid-2012, Australia was thought to be free of the mite.[9][10] In early 2010, an isolated subspecies of bee was discovered in Kufra (southeastern Libya) that appears to be free of the mite.[11]

IOWA STATE UNIVERSITY 11/06/12 Iowa State Researchers Explore Possible Causes of Honeybee Disappearance AMES, Iowa — Iowa State University is taking a team approach in studying what is behind the disappearance of honeybees known as "Colony Collapse Disorder." Amy Toth, assistant professor in Iowa State's ecology, evolution and organismal biology department, was awarded an Agriculture and Food Research Initiative grant by the U.S. Department of Agriculture to explore the importance of nutritional stress and viruses on honeybee health. "We're taking a novel approach to studying the colony collapse phenomenon," Toth said. Colony Collapse Disorder was recognized in 2006, but Toth said honeybees have been in trouble for decades. The effects of colony collapse are sudden. Fewer honeybees to pollinate food crops has led some farmers to import bees from Australia to ensure an adequate supply. "This is a food security issue that seeks to maintain competitiveness of U.S. agriculture," she says. Scientists have so far been frustrated in pointing to one cause of the disorder.

Journal of Invertebrate Pathology - A historical review of managed honey bee populations in Europe and the United States and the factors that may affect them 1. Introduction – the value of honey bees 2. Populations of managed honey bees 3. 4. Conflicts of interest References Abstract Honey bees are a highly valued resource around the world. Copyright © 2009 Elsevier Inc. USDA 21/06/16 USDA Scientists and Beekeepers Swap Colonies to Better Bees By Kim Kaplan June 21, 2016 BELTSVILLE, Md., June 21, 2016 —The U.S. Department of Agriculture's (USDA) Agricultural Research Service (ARS) Bee Research Laboratory and Geezer Ridge Farm apiary have begun an unusual partnership that may help honey bees take another step up the survival ladder. "Usually with science, researchers finish a study and turn the results over to beekeepers to apply; then researchers start on the next experiments and so on," explains entomologist Jay Evans, research leader of the Beltsville, Maryland lab and one of the USDA's pioneers in bee health science. This time, the Bee Research Lab is studying the success Geezer Ridge Farm in Hedgesville, West Virginia, has had improving honey bee health after applying USDA research results. Last winter, beekeepers Cheryl and Ed Forney lost only 4 percent of their bee colonies compared to the national average of 30 percent. "We believe strongly in science-based beekeeping. "This is an opportunity to give back.