You Missed It: Most Unfairly Overlooked Movies Of The Decade 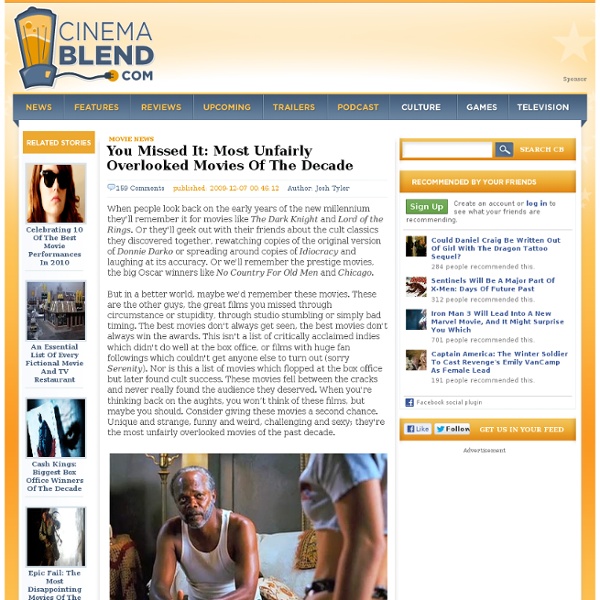 When people look back on the early years of the new millennium they'll remember it for movies like The Dark Knight and Lord of the Rings. Or they'll geek out with their friends about the cult classics they discovered together, rewatching copies of the original version of Donnie Darko or spreading around copies of Idiocracy and laughing at its accuracy. Or we'll remember the prestige movies, the big Oscar winners like No Country For Old Men and Chicago. But in a better world, maybe we'd remember these movies. These are the other guys, the great films you missed through circumstance or stupidity, through studio stumbling or simply bad timing. The best movies don't always get seen, the best movies don't always win the awards. Black Snake Moan (2007) Samuel L.

25 Spectacular Movies You (Probably) Haven't Seen Pt. 2 Human Traffic Very unique comedy about the drug/club culture in the UK. Five friends ponder society, drug use and their own lives as they go about their usual weekend of snorting, smoking, popping, dancing and sex. Top 10 Quirky Films & Top 10 Films - Film Lists, Reviews, News & Opinion The quirky movie. They’re “strange, not normal but cool” says Blandine Etienne as she takes a look at her favourite films from a genre Tim Burton and Wes Anderson know plenty about. Other Top 10s on Top10Films.co.uk that you might like: Top 10 Cult Films | Top 10 Films Set Over One Night | Top 10 Suburbia In Peril Films My favorite definition of quirky is “strange, not normal but cool.” That is exactly why I like quirky movies. They will often take you somewhere you have not been before and introduce you to characters you never knew you wanted to meet.

100 Best of the Decade EmailEmail Since we first published our 100 Best Movies of the Decade in 2009, films have continued to get bigger and better. Here’s an update to the original list. Here’s what we originally wrote five years ago. Donnie Darko A new theory to help the viewer unravel the cult classic. Erik A. Coburn n recent years, Donnie Darko, directed by Richard Kelly, has become a cult classic. Top 10 Banned Movies Movies and TV [WARNING: some of the video clips in this list contain extremely violent or disturbing scenes.] For nearly the entire history of film production, certain films have been banned by film censorship or review organizations for political or moral reasons. Typically, a banned film goes through editing to remove explicit scenes, and is then re-released.

The Ten Best Horror Movies of 2008 Editor’s Note: As part of our Year in Review feature, we’ve tapped our resident horror expert Robert Fure for a list of the Ten Best Horror Movies of 2008. To read more of Robert’s horror reviews, check out The Coroner’s Report every Thursday. Being a horror fan is tough business and some years are worse than ever. 2008 saw its share of lame PG-13 movies (Prom Night) and an influx of crappy remade Japanese films (Shutter), in addition to having some of the more anticipated films (Trick ‘r Treat) delayed from wide release once again. That said, we worked long and hard to scrounge up 10 Horror films worthy of recognition in 2008 and believe me, it wasn’t easy. 10.

Toronto punk squalor immortalized in beautiful book The wonder isn't just that somebody wrote a book about the Bunchofuckingoofs, probably the most unglamourous and confrontational product of the city's punk scene. Frankly, it would have happened eventually, if only because there's such a good story behind the squalor and occasional violence that typified the band's nearly two-decade reign as the clown princes and junkyard dogs of Kensington Market. The wonder is that Jennifer Morton's book, Dirty, Drunk And Punk, is such a handsome, coffee table-worthy volume, setting the Goofs' grimy antics in a gilded frame.