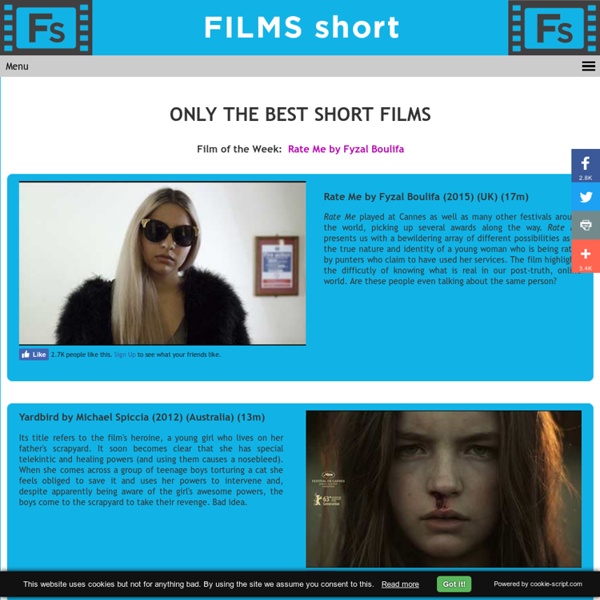 Welcome to FILMSshort, showing the best short films from around the world throughout the years. Check out the new FILMSshort winners page here. Vertical Menu with CSS3 Css3Menu.com Film of the Week: Helium by Anders Walter Helium by Anders Walter (2014) (Denmark) (23m) Helium won the Best Short Film Academy Award in 2014, proving that your chances of Oscar success are significantly improved if you have a dying child in your film!

Improve Your English by Watching Friends – 3 Steps on How to Actively Watch TV Shows I am delighted to introduce you to Paul Mains who has written this post. Paul approached me a couple of weeks ago offering to write a piece for my blog. He offered me a choice of topics and I was immediately drawn to the above topic. Many learners watch films and follow TV series in English. However, many often feel guilty and think that they should be doing something more worthwhile to work on their English.

Using Silent Video in the EFL Classroom This video is the BOMB! It is captivating, absorbing, a story par excellence but also SILENT! Yes, silent films are great for getting students to produce language — and after all is said and done, that most often is the hardest thing to do, getting the students speaking and learning language by just communicating. That is our job, to get the students so absorbed in the communicative act that they forget they are learning. When we forget and are not consciously fixated on the language – we learn so much more!

Top 100 Youtube videos for EFL! Youtube recently celebrated its 5th anniversary. Wow! See the video karaoke I made with Breakingnewsenglish content. However, today, in honor of youtube and what it does for our classrooms – I’ll leave you with a great gift. My 100 top youtube videos for students! The Best Online Short Films of 2014 This year was great for ​shorts. Whether you were learning about ​the most dangerous sport o​n earth, what it's like ​to be stuck ​in prison, or what it'd feel like to be part of a ​deadly W​estern joke, there was something for everyone. Presented below is a roundup of some of my favorite short movies from 2014. This list includes older films as long as they were released online this year, and it doesn't include any titles that have already been highlighted in my weekly ​I'm Short, Not Stupid column. Let the short film screening party begin!

Songs and Activities for English Language Learners Songs can be an effective way to introduce or reinforce a grammar topic. Click on the topics below for companion songs and activities. (In a blog article posted Oct. 4, 2016 at AzarGrammar.com, I list some of the benefits of using songs to teach grammar that I’ve observed in my own classroom.) Adjectives in the Song “True Colors”Adverb Clauses in the Song “Baby, I’m Yours”Comparisons with LikeFeel LikeGerunds as Objects of PrepositionsGerund or Infinitive after begin, start, continue, like, love, hate, can’t standGet to Do SomethingGotta: Informal Spoken English for Got ToInfinitives as AdjectivesI’ve Got It and I’ve Got ‘EmMust Have + Past ParticipleNoun ClausesParticipial PhrasesReflexive PronounsShould Have + Past ParticipleThird Person Singular: Mistakes in the Song “Memories” by Maroon 5Used to + a Verb in the Simple FormUsed to vs.

The Reader This EFL lesson plan is designed around a moving short film commissioned by Bells and directed by Greg Gray. In the lesson students write a narrative, watch a short film and discuss literacy strategies. I would ask all teachers who use Film English to consider buying my book Film in Action as the royalties which I receive from sales help to keep the website completely free. Language level: Intermediate (B1) – Upper Intermediate (B2) Learner type: All ages Time: 90 minutes

Extr@ – Learn English with videos A cool TV series, a funny sitcom, and an English course, all wrapped in one single package to make Extr@, the perfect way of learning natural English having fun.SEE THE OTHER EPISODES HERE !Do extr@ activities hereAnnie and Bridget share a flat. Their next-door neighbour Nick is a disorganized, humorous macho fellow. Bridget's Argentinean penpal, Hector, comes to London to visit her. His limited command of English serves as the central dynamic for the language learning content of the series. His trying to get to grips with the daily English is highly amusing (and enlightening).You do not need a tutor.

Mexican doodles I never had a class that didn’t ask if I wear a kilt when I am in my country. I wonder if Mexican teachers working away from home get asked the same thing about sombreros. This is a silly game that I remember from my childhood.