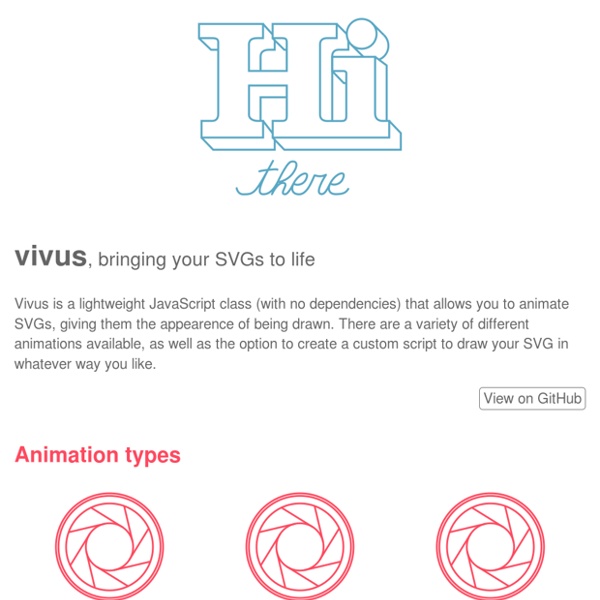 Vivus is a lightweight JavaScript class (with no dependencies) that allows you to animate SVGs, giving them the appearence of being drawn. There are a variety of different animations available, as well as the option to create a custom script to draw your SVG in whatever way you like. View on GitHub How it works To get this effect, the script uses the CSS property strokeDashoffset. This property manages the stroke offset on every line of the SVG. The code is inspired from other repositories. How to use it As I said, there are no dependencies here. The library is also available via Bower: bower install vivus or via jsDelivr CDN: //cdn.jsdelivr.net/vivus/0.1.2/vivus.min.js The Vivus constructor asks for 3 parameters : The ID of the SVG to animate (or the DOM element) Options object (described in the following) Callback to call at the end of the animation (optional) The options object must respect the following structure : type string duration integer animation duration, in frames start string

8 JavaScript Libraries to Animate SVG SVG is a resolution-independent graphic. That means it will look good on any type of screen without suffering any loss of quality. Beyond that, you can also makes SVG come alive with some animation effects. How SVG Line Animation Works I bet all of you have seen that little trick where an SVG path is animated to look like it's drawing itself. It's super cool. Jake Archibald pioneered the technique and has a super good interactive blog post on how it works. Brian Suda wrote about it on 24 Ways. Polygon used it to great effect on a custom designed article and wrote about it. Codrops has some neat examples.

SVG Tutorial - SVG Scalable Vector Graphics, SVG, is a W3C XML dialect to mark up graphics. It is partially implemented in Firefox, Opera, WebKit browsers, Internet Explorer and other browsers. This tutorial aims to explain the internals of SVG and is packed with technical details. If you just want to draw beautiful images, you might find more useful resources at Inkscape's documentation page. 100+ Best SVG Tutorial with Examples Clipped SVG Slider A simple slider, with morphing preview images animated using SVG properties. Simple Interactive Points Effect with SVG Today we’d like to share a simple hover/click effect for images with you. The main idea is to show a map or a base image with some points of interest (POS) and when we come close to one of these points and hover, an image starts to fade in.

30 Awesome SVG Animation For Your Inspiration Designers used to create animations in HTML elements using CSS. However, due to the limitations of HTML elements in creating patterns, shapes, and others, they naturally turn to SVG, which offers more interesting capabilities. Working with SVG, we enjoy good browser supprot for SVG animation, and we have more ways to create new animation. You can use both the built-in SVG animation functionality or CSS3 animation (note that not everything can be done by CSS so there is still need for JavaScript). Animate SVG icons with CSS and Snap How to optimize SVG code and animate an SVG icon using CSS and Snap.svg library. Browser support ie Chrome Firefox Safari Opera 9+ Working with SVG files is not an option anymore. With a huge amount of high definition devices out there, it’s not sustainable to export different sizes of the same bitmap assets and target specific device resolutions through CSS media queries.

The Simple Intro to SVG Animation This article serves as a first step toward mastering SVG element animation. Included within are links to key resources for diving deeper, so bookmark this page and refer back to it throughout your journey toward SVG mastery. An SVG element is a special type of DOM element that mimics the syntax of a standard HTML element. SVG elements have unique tags, attributes, and behaviors that allow them to define arbitrary shapes -- essentially providing the ability to create an image directly within the DOM, and thereby benefit from the JavaScript- and CSS-based manipulation that DOM elements can be subjected to. As a teaser of what we're about to learn, check out these demos that are only possible thanks to SVG: There are three significant benefits to creating graphics in SVG rather than using rendered images (PNG, JPEG, etc.): First, SVG compresses incredibly well; graphics defined in SVG have smaller file sizes than their PNG/JPEG equivalents.

Polygon feature design: SVG animations for fun and profit Written by dz, November 25, 2013 The Polygon PlayStation 4 Review and Xbox One Review involved an unprecedented level of coordination between the editorial and product teams at Vox Media. The goal was to create a pair of extremely high touch features to highlight the talents of our writers and video team, while pushing the envelope on longform design. SVG CSS - Tests about svg css snippet for all (modern) browsers and all embed modes ( <img /> , <object> , inline <svg> ) .svg file settings : I removed the width and height attributes and added : preserveAspectRatio="xMinYMin meet" viewBox="0 0 800 960" Without viewBox preserveAspectRatio has no effect

SVG Fallback with PNG Images If you’re not using SVG in your projects now, you should. SVG is awesome, and it’s a great way to minimise and simplify your image sprites, particularly when it comes to things like icons. If you have any vector graphics saved as PNG’s at all on your site actually, you should be jumping on board the SVG train. The following snippets showcase three ways to implement SVG’s, and have the SVG fallback to a PNG when SVG isn’t supported in the browser.