Scaling SVG Explained. Scaling <svg>s can be a daunting task, since they act very differently than normal images. 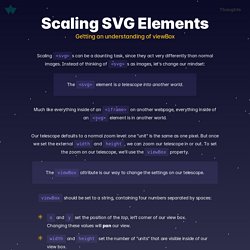 Instead of thinking of <svg>s as images, let's change our mindset: The <svg> element is a telescope into another world. Much like everything inside of an <iframe> on another webpage, everything inside of an <svg> element is in another world. Our telescope defaults to a normal zoom level: one "unit" is the same as one pixel. But once we set the external width and height, we can zoom our telescope in or out. The viewBox attribute is our way to change the settings on our telescope. viewBox should be set to a string, containing four numbers separated by spaces: x and y set the position of the top, left corner of our view box.Changing these values will pan our view.width and height set the number of "units" that are visible inside of our view box.Changing these values will zoom our view. 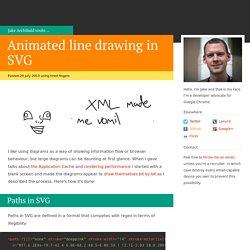 I like using diagrams as a way of showing information flow or browser behaviour, but large diagrams can be daunting at first glance. When I gave talks about the Application Cache and rendering performance I started with a blank screen and made the diagrams appear to draw themselves bit by bit as I described the process. Free Graphics Editor. BODYMOVIN : after effect script svg generation. The Simple Intro to SVG Animation. This article serves as a first step toward mastering SVG element animation. 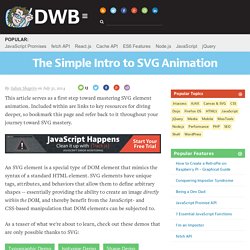 Included within are links to key resources for diving deeper, so bookmark this page and refer back to it throughout your journey toward SVG mastery. Animate SVG icons with CSS and Snap. How to optimize SVG code and animate an SVG icon using CSS and Snap.svg library.

Browser support ie Chrome Firefox Safari Opera 9+ Working with SVG files is not an option anymore. With a huge amount of high definition devices out there, it’s not sustainable to export different sizes of the same bitmap assets and target specific device resolutions through CSS media queries. We need to rely on vector graphics whenever it’s possible. SVG Tutorial - SVG. Scalable Vector Graphics, SVG, is a W3C XML dialect to mark up graphics. 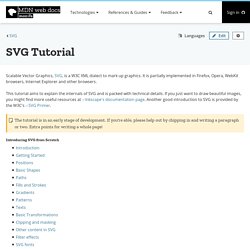 It is partially implemented in Firefox, Opera, WebKit browsers, Internet Explorer and other browsers. This tutorial aims to explain the internals of SVG and is packed with technical details. If you just want to draw beautiful images, you might find more useful resources at Inkscape's documentation page. How SVG Line Animation Works. I bet all of you have seen that little trick where an SVG path is animated to look like it's drawing itself. 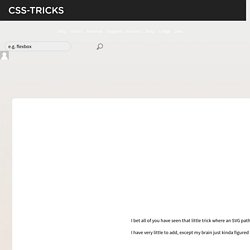 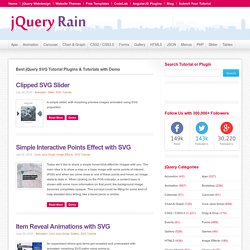 Simple Interactive Points Effect with SVG Today we’d like to share a simple hover/click effect for images with you. The main idea is to show a map or a base image with some points of interest (POS) and when we come close to one of these points and hover, an image starts to fade in. When clicking on the POS indicator, a content layer is shown with some more information on that point; the background image becomes completely opaque. 30 Awesome SVG Animation For Your Inspiration. 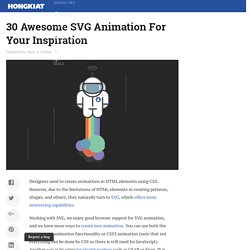 However, due to the limitations of HTML elements in creating patterns, shapes, and others, they naturally turn to SVG, which offers more interesting capabilities. Working with SVG, we enjoy good browser supprot for SVG animation, and we have more ways to create new animation. You can use both the built-in SVG animation functionality or CSS3 animation (note that not everything can be done by CSS so there is still need for JavaScript). Another way is by using JavaScript engines such as GSAP or Snap.

20 examples of SVG that will make your jaw drop. SVG (or Scalable Vector Graphics) is an XML-based file format that enables developers and designers to create high quality, dynamic graphics and graphical applications with a great level of precision.All modern browsers support rendering SVG: however, for older browsers like IE6, 7 and 8 without native support, you can fall back on polyfills such as SVG Web that use Flash for rendering content. 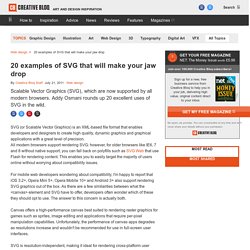 This enables you to easily target the majority of users online without worrying about compatibility issues. For mobile web developers wondering about compatibility, I'm happy to report that iOS 3.2+, Opera Mini 5+, Opera Mobile 10+ and Android 3+ also support rendering SVG graphics out of the box. Codrops CSS Reference. The mask-image property is used to specify one or more comma-separated images to be used as mask layers on an element. 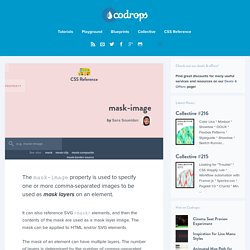 It can also reference SVG <mask> elements, and then the contents of the mask are used as a mask layer image. The mask can be applied to HTML and/or SVG elements. The mask of an element can have multiple layers. The number of layers is determined by the number of comma-separated values for the mask-image property. 8 JavaScript Libraries to Animate SVG. Scroll Drawing. We've taken an in-depth look at how SVG line drawing works before. It's a clever trick where you use dashed lines for the stroke, but the gap in the dash is so long it covers the entire path. Then you can move it such that it covers the entire path again, which makes it appear as if it's drawing itself. Using a bit of JavaScript, we can get a little fancier, drawing the shape to completion as page is scrolled to the bottom. Demo. Boxy SVG Editor. Polygon feature design: SVG animations for fun and profit. Written by dz, November 25, 2013 The Polygon PlayStation 4 Review and Xbox One Review involved an unprecedented level of coordination between the editorial and product teams at Vox Media.

The goal was to create a pair of extremely high touch features to highlight the talents of our writers and video team, while pushing the envelope on longform design. There were a lot of lessons learned, but the final results speak for themselves. Clippy — CSS clip-path maker. CSS Masking. Two commonly used operations in computer graphics are clipping and masking. Both operations hide visual portions of an element. If you have worked with SVG or HTML Canvas before, these operations are probably not new for you. Clipping defines the region of an element that is visible. Everything around this region does not get rendered - it gets "clipped". On masking, a mask image is composited with the element, affecting the alpha channel of this element. Clipping in CSS 2.1. A Complete Guide to SVG Fallbacks. The following is a guest post by Amelia Bellamy-Royds and me.

Amelia and I recently presented at the same conference together. Clipping and Masking in CSS. Both of these things are used to hide some parts of elements and show other parts. But there are, of course, differences between the two. Differences in what they can do, differences in syntaxes, different technologies involved, the new and the deprecated, and browser support differences. SVG Fallbacks. Les masques CSS. Comme c’est bientôt Noël, nous allons rêver un peu et regarder du coté des évolutions en matière de design web.

On se souvient tous de notre première réaction quand on a découvert border-radius ou box-shadow ? Personnellement, ça a du être un truc du style « Oh, purée ! O_O » Et quand on a mixé ça avec les transitions et les animations, alors là on s’est transformé en demi-dieu du CSS. Et puis c’est retombé. Aujourd’hui, on va envoyer du lourd, on va sortir de son train-train habituel, et oublier ce fichu « support IE7 ». SVG Fallback with PNG Images. If you’re not using SVG in your projects now, you should. SVG is awesome, and it’s a great way to minimise and simplify your image sprites, particularly when it comes to things like icons. If you have any vector graphics saved as PNG’s at all on your site actually, you should be jumping on board the SVG train.

SVG CSS - Tests about svg. Css snippet for all (modern) browsers and all embed modes ( <img /> , <object> , inline <svg> ) Animated Animals in CSS and SVG. Learn some interesting animation techniques involving Sass and SVG filters for realistic motion effects on the example of animated animals. View demo Download source Today we want to show you how the clever use of HTML, CSS sequenced animations, and SVG filters can bring to life one of the most unlikely (yet adorable) things to be seen on a web page – animals.