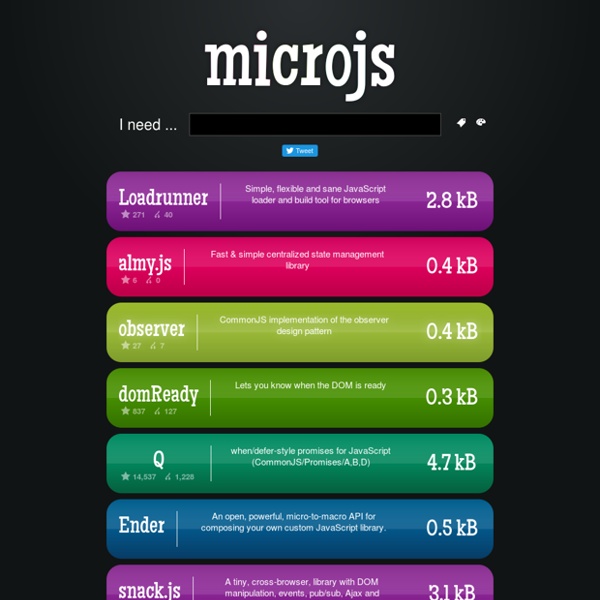 I need ... a base framework. a DOM utility. templating. CSS animation. JavaScript animation.

Douglas Crockford - Google+ - JSDev JavaScript is a difficult language to test with.… JSDev JavaScript is a difficult language to test with. Unit testing wants to pull each function out to be tested individually, but that extraction can break the amazing implicit structures that nesting can produce. Features Smart code splitting No matter which page your user lands on, the total footprint of a Remix app is about 50kb over the network (including dependencies). It doesn't matter how large your application gets, each page only downloads what it needs, which is actually pretty uncommon in the React ecosystem. React apps are typically built two ways: bundle everything into one enormous file (yikes!) or code split into multiple bundles to load on demand. The apps that code split usually send down a very large build manifest, listing every asset you could possibly need.

Ruby on Rails Tutorial: Learn Rails by Example book and screencasts by Michael Hartl Michael Hartl Contents Foreword My former company (CD Baby) was one of the first to loudly switch to Ruby on Rails, and then even more loudly switch back to PHP (Google me to read about the drama). This book by Michael Hartl came so highly recommended that I had to try it, and the Ruby on Rails Tutorial is what I used to switch back to Rails again. Though I’ve worked my way through many Rails books, this is the one that finally made me “get” it. Welcome to Jinja2 — Jinja2 2.7-dev documentation Jinja2 is a modern and designer friendly templating language for Python, modelled after Django’s templates. It is fast, widely used and secure with the optional sandboxed template execution environment: <title>{% block title %}{% endblock %}</title><ul>{% for user in users %} <li><a href="{{ user.url }}">{{ user.username }}</a></li>{% endfor %}</ul> Features: sandboxed executionpowerful automatic HTML escaping system for XSS preventiontemplate inheritancecompiles down to the optimal python code just in timeoptional ahead of time template compilationeasy to debug. Line numbers of exceptions directly point to the correct line in the template.configurable syntax

A suite of Javascript libraries and tools designed for working with HTML5 Recent Updates Follow @CreateJS November 2014 Added Unit Tests to EaselJSUpdates in preparation for new releases (coming soon). New class model, with big performance increases External Interface Tip « ActionScript 3, Flash, Flex Reflections This article will treat solutions to “swfObject.callback() is not a function” problem when using ExternalInterface in Flash/Flex. Ok, not so long ago I had to test some interaction between JavaScript and ActionScript. It wasn’t the first time I was using EI, and since it’s always good to start from a working examle, I set up the one provided by Adobe, test it – works fine. (An important note – you have to run it from a web server and add it to flash player’s security domain. I’ll show you how later).

Introducing Alpine.js: A Tiny JavaScript Framework About The Author Phil Smith is a freelance developer based in Brighton, UK. His agency, amillionmonkeys partner with designers, entrepreneurs and agencies to build websites and … More about Phil … Ever built a website and reached for jQuery, Bootstrap, Vue.js or React to acheive some basic user interaction? NoSQL Data Modeling Techniques « Highly Scalable Blog NoSQL databases are often compared by various non-functional criteria, such as scalability, performance, and consistency. This aspect of NoSQL is well-studied both in practice and theory because specific non-functional properties are often the main justification for NoSQL usage and fundamental results on distributed systems like the CAP theorem apply well to NoSQL systems. At the same time, NoSQL data modeling is not so well studied and lacks the systematic theory found in relational databases. In this article I provide a short comparison of NoSQL system families from the data modeling point of view and digest several common modeling techniques. I would like to thank Daniel Kirkdorffer who reviewed the article and cleaned up the grammar.

Paste Date Time Picker Home / Free JavaScripts / Clocks, Calendars, And Timers / Here Description: Date Time Picker allows your visitors to easily input a date/time into a form field, by selecting it from a popup window. Supports output dates in various formats such as: dd/MM/yyyy, dd/MMM/yyyy, MM/dd/yyyy etc. android-scripting - Scripting Layer for Android brings scripting languages to Android. SL4A's source has moved to github. The issue tracker, wiki, and downloads will continue to be hosted here. Scripting Layer for Android (SL4A) brings scripting languages to Android by allowing you to edit and execute scripts and interactive interpreters directly on the Android device. These scripts have access to many of the APIs available to full-fledged Android applications, but with a greatly simplified interface that makes it easy to get things done.