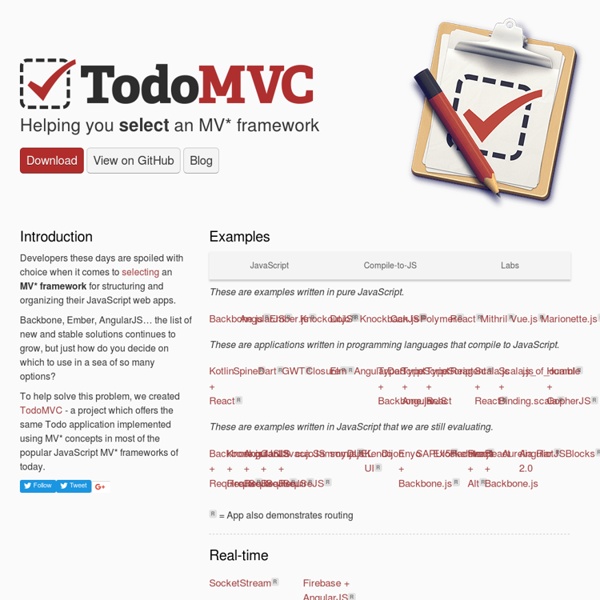 Selecting a Framework Once you've downloaded the latest release and played around with the apps, you'll want to decide on a specific framework to try out. Study the syntax required for defining models, views and (where applicable) controllers and classes in the frameworks you're interested in and try your hand at editing the code to see how it feels using it first-hand. Please ensure that if you're happy with this, you do spend more time investigating the framework (including reading the official docs, the source and its complete feature list). There's often a lot more to a framework than what we present in our examples. Getting Involved

10 Interview Questions Every JavaScript Developer Should Know — JavaScript Scene Good to hear: Classes: create tight coupling or hierarchies/taxonomies.Prototypes: mentions of concatenative inheritance, prototype delegation, functional inheritance, object composition. Red Flags: Silk, A Cloud-Based App To Visualize Data, Launches Its First Paid Product For Teams, Gets Another $1.6M From NEA Since Silk first came out of stealth mode in 2011, there have been 300,000 interactive pages created on its cloud-based, web data-crunching platform designed for non-technical “knowledge workers.” Taking less easy-to-read data sets and making them more digestible, results have ranged from the Guardian newspaper in the UK creating graphics of which countries have the most asylum seekers, through to charting what products Google has killed and dads mapping out the best playgrounds for his kid in Amsterdam (where Silk also happens to be founded). It’s been a popular, and free, tool, with pages created by some 16,000 people growing by 20 percent each month.

os-x-mavericks-10-9-retail-vmware-image-t7981468 Full release notes can be found here: First version of the OS X Mavericks Retail VMware Image. Contains OS X Mavericks GM, and is compiled entirely from stock. Boots on average around a minute although it can be in as little as 25 seconds sometimes., but make sure to give up to 10 just in case. Recommended you watch the setup video contained in the download to get it working properly and avoid unobvious mistakes, anything covered in that won't be addressed in the comments. First boot will be slower compared to future startups.

JavaScript Application Architecture On The Road To 2015 — Google Developers Composition is one of the reasons we regularly talk about React “Components”, “Ember.Component”s, Angular directives, Polymer elements and of course, straight-up Web Components. We may argue about the frameworks and libraries surrounding these different flavours of component, but not that composition is inherently a bad thing. Note: earlier players in the JS framework game (Dojo, YUI, ExtJS) touted composition strongly and it’s been around forever but it’s taken us a while for most people to grok the true power of this model as broadly on the front-end. Composition is one solution to the problem of application complexity. Now, the way that languages in the web platform evolve are in direct response to the pain caused by such complexity.

(fluxus) A 3D game engine for livecoding worlds into existence. Fluxus is a rapid prototyping, playing and learning environment for 3D graphics, sound and games. Extends the Racket language with graphical commands and can be used within it’s own livecoding environment or from within the DrRacket IDE. Fluxus is crossplatform (Linux, Windows, OSX, Android, PS2), and is released under the GPL licence. Today’s splash screen brought to you by akinoshi.

Want to learn JavaScript in 2015 / 2016? Now you could choose to continue reinforcing what you have already learnt or find new things to learn. I personally took a shine to Functional programming along with a library called RxJS by author and Sourcerer Matt Podwysocki. This all happened from taking a course presented by Jafar Husain, he is a very genuinely enthusiastic teacher. That to me is when I learn the best, if you are watching/interacting with a person who loves what he is doing it shows and you naturally become more interested. I know it sounds like I was paid for this testimony but trust me this all came out of my own pocket!

The Silk team is joining Palantir! - Silk We’re happy to announce today that the Silk team is joining Palantir. Silk started with the goal of helping people get the most out of their data. Over the last few years, we’ve worked relentlessly on a vision to help people structure, query, visualize and share data. We’re proud of the product and community we built, and of all the data journalists, activists, NGOs, businesses and many other kinds of people that were able to find important insights and tell great data stories through Silk. When we met the Palantir team, we realized that we could work on even bigger and more important data problems with an incredibly talented team – even if it meant no longer working on the Silk product.

Here’s a Squishy Robotic Hand Grabbing a Pumpkin (and Other Inanimate Objects) Soft robots might very well revolutionize surgery and search and rescue operations. But they’ve already forever changed how we handle seasonal gourds. At least, that’s what you’re looking at in this demo video for a new adaptive gripping platform from Soft Robotics Inc., a Boston-based start up specializing in “rubbery robots” that can be could be used during surgery and various other biomedical applications. To demonstrate the sort of adroitness that Soft Robotics is after, the company set its modular, interchangeable graspers loose of a range of objects, from the pliant (heads of fresh produce) to the cumbersome (pumpkins, pufferfish). “We thought, ‘What’s the scariest thing you could grab with your bare hands?’” Soft Robotics CEO Carl Vause told me.