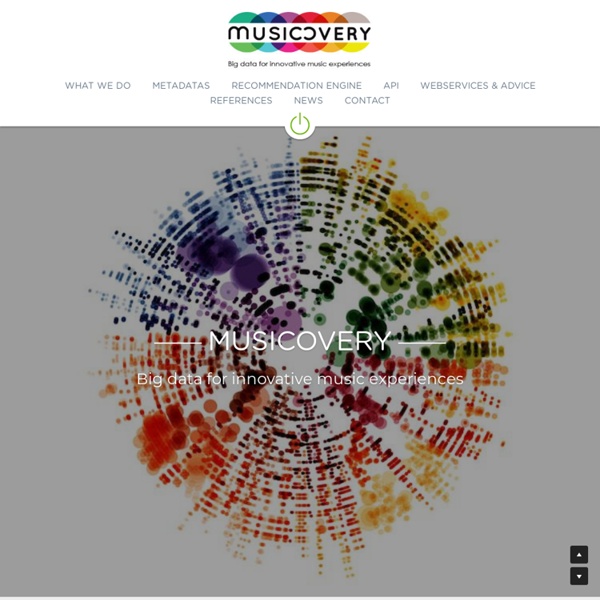 Mark Jenkins // Street Installations Besançon Rome Rio de Janeiro Tudela All That Is Humor & humor OC Comic Idea Can you learn how to be happy? You first learn Humor and funny. To be a funny person, you have to look funny. It is easy. Some examples in our blog tells you how to do this. 7 Alternatives to Pandora and Last.FM Whether you are annoyed by the ads on Pandora, the limited number of skips, or the abyss of cruel 30-second song teasers from Last.FM, many online listeners are growing weary of mainstream methods of hearing new music. While the Pandora algorithm is strong, and the Last.FM related artists tool is pretty useful, don’t fool yourself in to thinking that there aren’t other great ways to expose yourself to new music in the depths of cyberspace. Here are 7 alternatives to Pandora and Last.FM that will infuse your day with an uninterrupted stream of music that large record companies haven’t managed to squash under their thumbs yet. StumbleAudio

Otomata 16 Jul 2011 Click on the grid below to add cells, click on cells to change their direction, and press play to listen to your music. Update: Click here to get Otomata for your iPhone / iPod / iPad! Official facebook page: An Essay by Einstein "How strange is the lot of us mortals! Each of us is here for a brief sojourn; for what purpose he knows not, though he sometimes thinks he senses it. But without deeper reflection one knows from daily life that one exists for other people -- first of all for those upon whose smiles and well-being our own happiness is wholly dependent, and then for the many, unknown to us, to whose destinies we are bound by the ties of sympathy.

Forgotten Bookmarks Typed poem titled "Abraham Lincoln." With a little searching, I discovered it's by Charles Monroe Dickinson. This paper doesn't have the complete poem, I'll reproduce it in its entirety: Found in "Cyrano de Bergerac" by Edmond Rostand. Published by Hurst, 1907. There was an amusing inscription in the book: All Songs Listeners Pick The Best Albums Of 2010 Back in June, when we asked All Songs Considered listeners to pick the year's best music (so far), the Gorillaz album Plastic Beach was the overwhelming favorite. But that was still a couple of months before Arcade Fire released its third full-length, The Suburbs. With it in the year-end mix, no other album or artist could compete. All Songs Considered listeners cast tens of thousands of votes, and The Suburbs was light years ahead of everything else to become the year's top vote-getter. This is our favorite time of year at NPR Music. We love to look back at all the great music that came out and debate which albums and songs are better than others.

Playlist - The Perfect House Party Playlist: Pre-Drunk Rock To Hip Hop The name pretty much says it all. If you have a house party, this is perfect. You start the list around 9-10ish before people get any spirits in them and the party is bustling. The Music transitions from rock and music you can talk behind quickly to more energetic classic and modern rock. After that, it transitions to dance music with a few good drunk singalongs thrown in. At the very end when peo... [+]