Theory in ELT. Games for Learning English, Vocabulary, Grammar Games, Activities, ESL. Media Library - A Child’s Guide to Language (Horizon) What’s the Matter With ‘Me’? – Lingua Franca. George Orwell On The Abuse Of Language For Political Ends. To speak another language isn't just cultured, it's a blow against stupidity. In 2004, the Labour government removed modern languages from the "core curriculum". 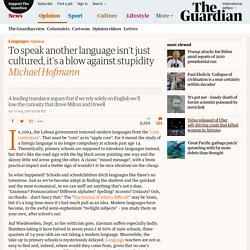 That must be "core" as in "apple core". For it meant the study of a foreign language is no longer compulsory at schools past age 14. Theoretically, primary schools are supposed to introduce languages instead, but that's like the road sign with the big black arrow pointing one way and the skinny little red arrow going the other. Teaching English-Language Learners: What Does the Research Tell Us?

What happens in the brain when you learn a language? Learning a foreign language can increase the size of your brain. 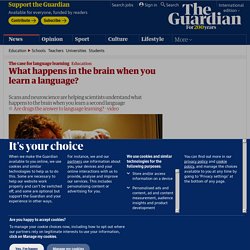 This is what Swedish scientists discovered when they used brain scans to monitor what happens when someone learns a second language. The study is part of a growing body of research using brain imaging technologies to better understand the cognitive benefits of language learning. Tools like magnetic resonance imaging (MRI) and electrophysiology, among others, can now tell us not only whether we need knee surgery or have irregularities with our heartbeat, but reveal what is happening in our brains when we hear, understand and produce second languages.

The Swedish MRI study showed that learning a foreign language has a visible effect on the brain. Young adult military recruits with a flair for languages learned Arabic, Russian or Dari intensively, while a control group of medical and cognitive science students also studied hard, but not at languages. However we learn, this recent brain-based research provides good news. Best, Worst Learning Tips: Flash Cards Are Good, Highlighting Is Bad. In a world as fast-changing and full of information as our own, every one of us — from schoolchildren to college students to working adults — needs to know how to learn well. 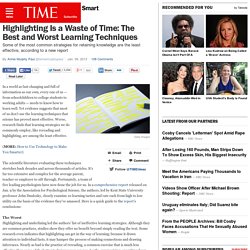 Yet evidence suggests that most of us don’t use the learning techniques that science has proved most effective. Worse, research finds that learning strategies we do commonly employ, like rereading and highlighting, are among the least effective. (MORE: How to Use Technology to Make You Smarter) The scientific literature evaluating these techniques stretches back decades and across thousands of articles. It’s far too extensive and complex for the average parent, teacher or employer to sift through. 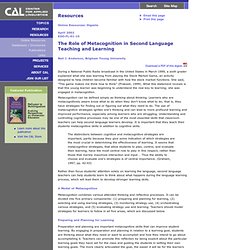 Anderson, Brigham Young University Download a PDF of this digest. During a National Public Radio broadcast in the United States in March 1999, a sixth grader explained what she was learning from playing the Stock Market Game, an activity designed to help children become familiar with how the stock market functions. Metacognition can be defined simply as thinking about thinking. Www.ncte.org/library/NCTEFiles/Resources/Books/Sample/StandardsDoc. Www.hss.nthu.edu.tw/~fl/faculty/eng/John.html. The Best Ways To Keep-Up With Current ELL/ESL/EFL News & Research. In addition to keeping-up with the latest overall education news, I’m obviously particularly interested in the latest research and policy issues related to teaching English Language Learners. 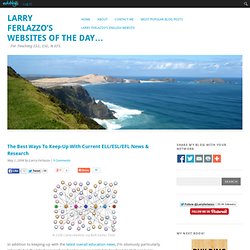 I thought readers might find it helpful to see what I’ve found to be the best free sources of this kind of information, so I’ve developed yet another “The Best…” list. These sites are different from the ones I in The Best Resource Sites For ESL/EFL Teachers. Those sites immediately practical ideas and materials that can be used in the classroom — . The sites on this list are more related to on-going research and policy issues connected to English Language Learners.

Here they are, not necesarily in order of preference: The key blog I like that provides regular updates on ELL research and news is Learning The Language at Edweek. The Center For Applied Second Language Studies offers an excellent weekly e-bulletin called InterCom. Speaking Multiple Languages Can Influence Children’s Emotional Development. News. 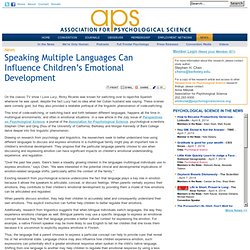 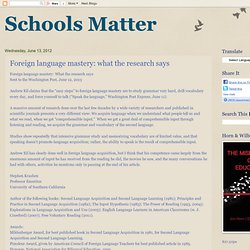 A massive amount of research done over the last few decades by a wide variety of researchers and published in scientific journals presents a very different view: We acquire language when we understand what people tell us and what we read, when we get “comprehensible input.” When we get a great deal of comprehensible input through listening and reading, we acquire the grammar and vocabulary of the second language. Studies show repeatedly that intensive grammar study and memorizing vocabulary are of limited value, and that speaking doesn’t promote language acquisition; rather, the ability to speak is the result of comprehensible input. 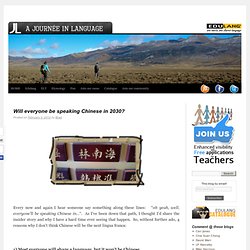 As I’ve been down that path, I thought I’d share the insider story and why I have a hard time ever seeing that happen. So, without further ado, 4 reasons why I don’t think Chinese will be the next lingua franca: 1) Most everyone will share a language, but it won’t be Chinese. a) It will be (or rather, it is) English. English hasn’t been crowned the lingua franca, and it never will be, and maybe the reason for that is that there is no longer a symbolic head to be crowned. The Best Ways To Keep-Up With Current ELL/ESL/EFL News & Research. This Sure Is One Impressive Interactive Infographic About English Language Learners. New Study Uncovers If Texting Actually Affects Grammar. If you’re worried that your students or children are eroding their vocabulary due to texting, you may want to sit down.