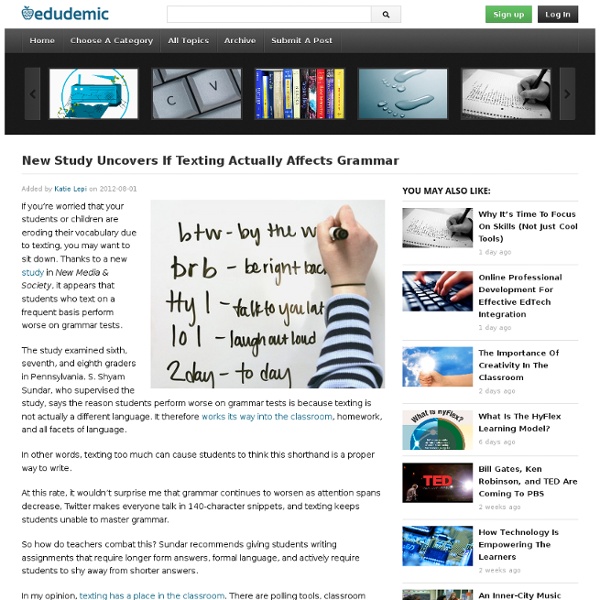 If you’re worried that your students or children are eroding their vocabulary due to texting, you may want to sit down. Thanks to a new study in New Media & Society , it appears that students who text on a frequent basis perform worse on grammar tests. The study examined sixth, seventh, and eighth graders in Pennsylvania. S. Shyam Sundar, who supervised the study, says the reason students perform worse on grammar tests is because texting is not actually a different language. It therefore works its way into the classroom , homework, and all facets of language. In other words, texting too much can cause students to think this shorthand is a proper way to write. At this rate, it wouldn’t surprise me that grammar continues to worsen as attention spans decrease, Twitter makes everyone talk in 140-character snippets, and texting keeps students unable to master grammar. So how do teachers combat this? In my opinion, texting has a place in the classroom . Related:  ENGB1 Lang and Tech • Grammar • FL Research

France Shuns 'Hashtag,' Introduces New Twitter Term, 'Mot-Dièse' While there may be many English words commonly used in the French language, "hashtag" will no longer be one of them. Following a decision from the Commission Générale de Terminologie et de Néologisme, which seeks to enrich the language by finding French alternatives for anglicisms, France has moved to bar the use of "hashtag" in favor of a new Twitter term, "mot-dièse," the Connexion reports. On Wednesday, France announced its decision to scrap the word on the government-run website Journal Officiel, the Local reports. News of the change to "mot-dièse" -- "sharp-word" -- spread quickly among French Twitter users as many criticized and mocked the new term, calling it "awful" and "much less stylish." However, as many Twitter users were quick the point out, using "mot-dièse" to signify a hashtag is technically incorrect since the word "dièse" denotes the sharp sign (♯), rather than the right-leaning hashtag symbol (#). (h/t Death and Taxes) Also on HuffPost:

Duz Txting Hurt Yr Kidz Gramr? Absolutely, a New Study Says - Inside School Research "Wud u lk 2 meet me 4 brgr 2nite?" If you've ever looked at a teenager's text message and thought it looked more like a kindergartener's scrawl, you might not be far off. Middle school students who frequently use "tech-speak"—omitting letters to shorten words and using homophone symbols, such as @ for "at" or 2nite for "tonight"—performed worse on a test of basic grammar, according to a new study in New Media & Society. Drew P. Mr. Moreover, the more often a student received text messages using tech-speak, the more likely he or she was to send messages using that language. Mr. While texting has caused consternation among educators and parents since the 1990s for distracted writing as well as driving, changing communication technology historically has changed the way people speak and write over time. Furthermore, contrary to Mr. "People get creative in terms of trying to express a lot. Likewise, teachers can help their text-happy students shore up their grammar skills, Mr.

Speaking Multiple Languages Can Influence Children’s Emotional Development News On the classic TV show I Love Lucy, Ricky Ricardo was known for switching over to rapid-fire Spanish whenever he was upset, despite the fact Lucy had no idea what her Cuban husband was saying. These scenes were comedy gold, but they also provided a relatable portrayal of the linguistic phenomenon of code-switching. This kind of code-switching, or switching back and forth between different languages, happens all the time in multilingual environments, and often in emotional situations. In a new article in the July issue of Perspectives on Psychological Science, a journal of the Association for Psychological Science, psychological scientists Stephen Chen and Qing Zhou of the University of California, Berkeley and Morgan Kennedy of Bard College delve deeper into this linguistic phenomenon. “Over the past few years, there’s been a steadily growing interest in the languages multilingual individuals use to express emotions,” says Chen.

The rise of over-familiar websites 28 January 2013Last updated at 09:57 GMT From social networks to the websites of venerable High Street stalwarts, over-familiarity has spread like the plague across the internet, says Colm O'Regan. Sometimes it's the jaunty "What's going on, Colm?" On other occasions the question is "How are you doing, Colm?" As of yet I haven't been asked "How are you feeling, Colm?" It seems friendly enough. And asking after my welfare is not a dramatic departure for the company. The difference is the use of my name. Facebook is not the only one getting chummy. There's also an informality that I find irrationally grating. "One double soy decaf flat white - hey, great glasses, man!" One of the more informal is my mailing-list provider. When someone unsubscribes from the mailing list, I get a message saying: "Nuts, a few people jumped ship. This is not the only example. When I register on some websites and then log in again, I'll see a message saying "Howdy Colm, welcome back!" Don't "howdy" me.

Leoxicon The Best Ways To Keep-Up With Current ELL/ESL/EFL News & Research In addition to keeping-up with the latest overall education news, I’m obviously particularly interested in the latest research and policy issues related to teaching English Language Learners. I thought readers might find it helpful to see what I’ve found to be the best free sources of this kind of information, so I’ve developed yet another “The Best…” list. These sites are different from the ones I in The Best Resource Sites For ESL/EFL Teachers. The sites on this list are more related to on-going research and policy issues connected to English Language Learners. Here they are, not necesarily in order of preference: The key blog I like that provides regular updates on ELL research and news is Learning The Language at Edweek. The Center For Applied Second Language Studies offers an excellent weekly e-bulletin called InterCom. TESOL Connections is a nice e-newsletter that’s sent out twice-a-month. Colorin Colorado is a great resource site for teachers of English Language Learners. Resources

Trolls: where do they come from? | Media The story, if apocryphal, is at least a fair approximation of the truth. In 1840, a delegation of Russian investors paid a visit the UK to watch the construction of the London and South-western Railway. The station they visited was Vauxhall; and because they confused the word on the building with the name of the concept, ever since that day, the Russian word for a large train station has been vokzal. Before you laugh too hard, bear in mind that English speakers may be about to do exactly the same thing. You must have noticed that there's a new meme in town. After a slew of cases of people using online forums and social media to insult, racially abuse or harass high-profile figures – Louise Mensch, Fabrice Muamba, Noel Edmonds and now the Guardian's own Grace Dent – the media have taken it upon themselves to foist a new word upon us: troll (n: online bully. v: to bully in a discussion group or social network). There's one problem. Hmm. Is there any sense in fighting it?

There is / There are - Games to learn English | Games to learn English The basic explanation of the usage of the phrase THERE IS / THERE ARE is easy to understand and practice. My students caught on very quickly and then used the phrase without any mistakes. However, you might need to teach the plural first to allow the students use these without any mistakes. In this post there is a clear mind map which even 9 years old managed to understand, a worksheet and two games to practice the grammar. There is / There are – mind map Ask the students to have a look at the following mind map and explain the following points:It is used to describe a scenery or picture.THERE IS A + one thingTHERE ARE + more than one thing. There is / There are – games and activities The first activity is a simple spot the difference activity. There is there are worksheet The next two activities are interactive quizzes and games. There is / There are – Angry Finches In the second game you should write the missing words into the sentences to describe the picture on the left.

Foreign language mastery: what the research says Foreign language mastery: What the research says Sent to the Washington Post, June 12, 2013 Andrew Eil claims that the “easy steps” to foreign language mastery are to study grammar very hard, drill vocabulary every day, and force yourself to talk (“Speak the language,” Washington Post Express, June 11). A massive amount of research done over the last few decades by a wide variety of researchers and published in scientific journals presents a very different view: We acquire language when we understand what people tell us and what we read, when we get “comprehensible input.” When we get a great deal of comprehensible input through listening and reading, we acquire the grammar and vocabulary of the second language. Studies show repeatedly that intensive grammar study and memorizing vocabulary are of limited value, and that speaking doesn’t promote language acquisition; rather, the ability to speak is the result of comprehensible input.

Keep your emoticons in check | Mind your language | Media Every day I get about 120 emails, four texts, and six messages on Facebook. Sometimes I feel a bit overwhelmed by all the technology that sits in between me and the people I'm trying to reach. I imagine Professor Scott Fahlman struggling with the same feeling almost exactly 30 years ago when he suggested that the computer science department of Carnegie Mellon University adopt emoticons on its online bulletin board. Long before online bulletin boards, people used to pass on their histories by word of mouth. Meanwhile, the stuff we type today looks the same regardless of who we are or what mood we're in. To balance out all this sameness, people often resort to exclamation marks, ALL CAPS, smiley faces, and sometimes even Hello Kitty emoticons, which can have the effect of a squealing teenager. Imagine William Carlos Williams' poem The Red Wheelbarrow if it was written by some of the standards we use today: SO much depends upon a red wheel barrow :) glazed with rain! water! beside the white

Will everyone be speaking Chinese in 2030? Every now and again I hear someone say something along these lines: “oh yeah, well, everyone’ll be speaking Chinese in…“. As I’ve been down that path, I thought I’d share the insider story and why I have a hard time ever seeing that happen. So, without further ado, 4 reasons why I don’t think Chinese will be the next lingua franca: 1) Most everyone will share a language, but it won’t be Chinese. a) It will be (or rather, it is) English. b) On Tuesday I enjoyed listening to Stephen Krashen speak at an IATEFL and EVO online presentation. c) Become bilingual because it’s wonderful (and because it’s good for proper aging!). 2) The Chinese are all learning English Upon returning from Shanghai this past year I saw this: HSBC ad in french says “5X as many English learners in China than inhabitants in England” Nuff said… 3) If the Chinese speak English, then what need is there to learn Chinese? Of course, for scholastic reasons it’s important. 4) Chinese is an enormous linguistic challenge