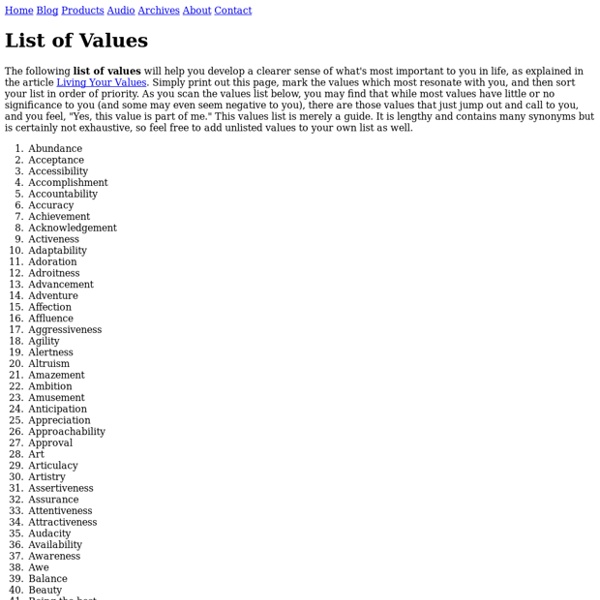 The following list of values will help you develop a clearer sense of what's most important to you in life, as explained in the article Living Your Values. Simply print out this page, mark the values which most resonate with you, and then sort your list in order of priority. As you scan the values list below, you may find that while most values have little or no significance to you (and some may even seem negative to you), there are those values that just jump out and call to you, and you feel, "Yes, this value is part of me." This values list is merely a guide. It is lengthy and contains many synonyms but is certainly not exhaustive, so feel free to add unlisted values to your own list as well. Steve RecommendsHere are my recommendations for products and services I've reviewed that can improve your results. Site Build It!

The Art of Getting Started This is my first blog for , and I've decided to begin at the beginning. Like many writers, I dread the start of a new piece of work, or, to put it more accurately, I dread the of the start. To begin anything is to open myself up to the possibility of failure and disappointment, two things nobody enjoys very much. Ideally, I would only ever embark on projects that were guaranteed to be perfect both in conception and execution, and were therefore also guaranteed to be anxiety-free, but as it is I am a real person doing real things in the real world, so my choice is to face the anxiety - the feeling I mentioned earlier - or never get anything done ever. Perfectionism is, apparently, functional for some people. I would even say that sometimes it works for me: its time comes later on, though, at the editing stage, when a knack for spotting problems and a certain finicky to detail are actually quite useful for a writer.

63 Ways to Build Self-Confidence Confidence is a tool you can use in your everyday life to do all kinds of cool stuff, not least to stop second-guessing yourself, manage your fears and become able to do more of the things that really matter to you. But not many people realise that their self-confidence works just like a muscle – it grows in response to the level of performance required of it. Either you use it or you lose it. That’s why I’ve given you 63 ways to grow your confidence so that you can become a giant. Learning is a Good Thing, so sign up for that evening class and enjoy it.Get out of your own head by asking your partner or best friend what you can do for them today.Hit the gym.

Moral Psychology Primer Dan Jones has a terrific article in the April issue of Prospect, titled “The Emerging Moral Psychology.” We’ve included some excerpts from the article below. Long thought to be a topic of enquiry within the humanities, the nature of human morality is increasingly being scrutinised by the natural sciences. This shift is now beginning to provide impressive intellectual returns on investment. 9 Daily Habits That Will Make You Happier Happiness is the only true measure of personal success. Making other people happy is the highest expression of success, but it's almost impossible to make others happy if you're not happy yourself. With that in mind, here are nine small changes that you can make to your daily routine that, if you're like most people, will immediately increase the amount of happiness in your life: 1. Start each day with expectation. If there's any big truth about life, it's that it usually lives up to (or down to) your expectations.

40 Tips for a Better Life - Global One TV Contributed byGlenn Ong Reading tips from the Internet, I got this useful list where I personally follow some of it to help me sort of improve my day to day life. Read through it and just follow the things you want to believe. Remember, each person has his/her own needs/wants/beliefs. 1. Take a 10-30 minute walk every day. Virginia Study Finds Increased School Bullying In Areas That Voted For Trump After the 2016 presidential election, teachers across the country reported they were seeing increased name-calling and bullying in their classrooms. Now, research shows that those stories — at least in one state — are confirmed by student surveys. Francis Huang of the University of Missouri and Dewey Cornell of the University of Virginia used data from a school climate survey taken by over 150,000 students across Virginia. They looked at student responses to questions about bullying and teasing from 2015 and 2017. Their findings were published Wednesday in Educational Researcher, a peer-reviewed journal of the American Educational Research Association. In the 2017 responses, Huang and Cornell found higher rates of bullying and certain types of teasing in areas where voters favored Donald Trump over Hillary Clinton in the 2016 election.

10 Golden Lessons from Albert Einstein Every day I remind myself that my inner and outer life are based on the labors of other men, living and dead, and that I must exert myself in order to give in the same measure as I have received and am still receiving - Albert Einstein Albert Einstein was an amazing physicist. He figured out so many universal principles and equations that he was way ahead of his fellow scientists at any point of time. But he is also remembered for another thing; a quality which made people call him a genius: his words.

50 Ways to Get Your Life in Order This is an article by guest writer Mark Foo, author of The 77 Traits of Highly Successful People. There’s nothing wrong with a little bit of chaos in your life. As Albert Einstein once stated, “Three rules of work: out of clutter find simplicity, from discord find harmony, in the middle of difficulty lies opportunity.” Insights into Sexism: Male Status and Performance Moderates Female-Directed Hostile and Amicable Behaviour Abstract Gender inequality and sexist behaviour is prevalent in almost all workplaces and rampant in online environments. Although there is much research dedicated to understanding sexist behaviour, we have almost no insight into what triggers this behaviour and the individuals that initiate it. Although social constructionist theory argues that sexism is a response towards women entering a male dominated arena, this perspective doesn’t explain why only a subset of males behave in this way. We argue that a clearer understanding of sexist behaviour can be gained through an evolutionary perspective that considers evolved differences in intra-sexual competition.