The Best 24 Resources for Cheap, Free, or Paid Travel (Part 1) 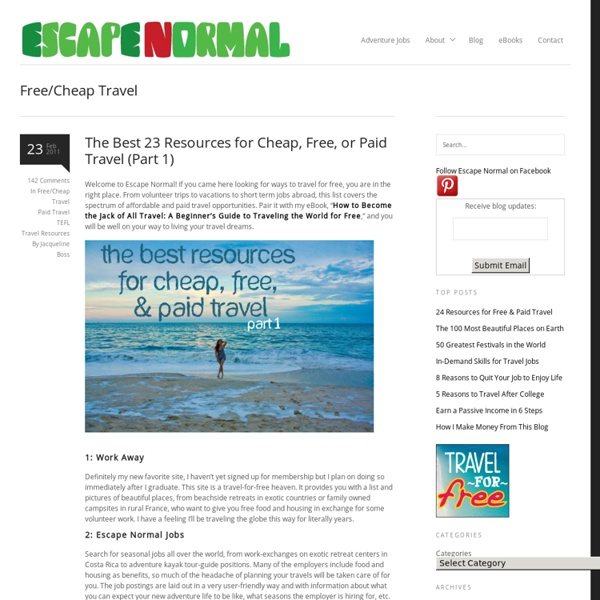 The Best 23 Resources for Cheap, Free, or Paid Travel (Part 1) Welcome to Escape Normal! If you came here looking for ways to travel for free, you are in the right place. 1: Work Away Definitely my new favorite site, I haven’t yet signed up for membership but I plan on doing so immediately after I graduate. 2: Escape Normal Jobs Search for seasonal jobs all over the world, from work-exchanges on exotic retreat centers in Costa Rica to adventure kayak tour-guide positions. 3: Back Door Jobs This is for the adventurous type who still wants to make money while traveling. 4: Coolworks This site is so simple to navigate and has all the seasonal job listings you could ever think of in one place. 5: Couchsurfing Instead of spending money on a hotel or hostel, other travelers around the world welcome you to stay on their couches for a few days, and sometimes even offer to show you the sites in their town. This is a great resource, especially for younger people. 7: Help Exchange 8: Footprints TEFL

How To Pack A Carry-On Like A Pro I got home late last night from another trip to New York City (second on in two months!). As fun as it is to go the “big city” every once in awhile….I wouldn’t mind staying put for a little while either. :-) Anyway you look it it….traveling is STRESSFUL! I ended up finding and watching a great YouTube video from Dr. The video is a bit long (about 15 minutes), so I’m going to try and consolidate it here with some picture I snapped while I was packing my bag on Monday afternoon. The first thing I did was pack small clothing items like underwear, nylons, camisoles, scarves, swimsuits, socks, slips, etc in the very bottom of the bag, in between those ridges that are made by the extendable metal handles of the bag. It never occurred to me before to take advantage of this space…but I was really surprised at how many little things I was able to fit in there! Next step is to start layering. The key is to pack your clothing items completely flat. Then just keep layering! At this point Dr.

How to Travel in Europe for 3 Weeks Traveling for three weeks was no small feat. We planned for months, researched locations and prepared as much at home so we could just enjoy our trip. I've been asked about our best travel tips, so here it goes. Pack Light Yep, those are our suitcases. We ditched traditional suitcases because I couldn't imagine pushing through bustling European train stations as I wheeled a mammoth suitcase behind me. gave us the ability to be assertive in crowds and forced us to pack light. Pack Smart As a notorious overpacker, this was really tricky for me. 7 Shirts and 2 undershirts 4 bottoms (jeans, shorts, skirt, leggings) 1 dress 1 swimsuit 1 hoodie 2 scarves 1 belt 2 pairs of shoes: Keds and a pair of Sanuk flats Toiletries (but not hairdryer or curling iron) Snacks (granola bars, oatmeal, gummy bears) Books (travel and leisure) Garbage sacks (for dirty laundry) (I bought a couple of shirts and a blazer while traveling that I wore as well) How I would have packed differently: Research Library.

The Blues . Blues Road Trip The Blues™ Road Trip traces the migration of the blues throughout the USA from its origins in slave communities on plantations in the Deep South. The blues, a mix of African and New World musical influences, spread from its birthplace in the Mississippi Delta through Louisiana and Texas, northward to Memphis, St. Louis, Chicago, Detroit, and beyond as freed slaves and their descendants left the South in search of better lives in northern cities in "The Great Migration" of African Americans in the early to mid 1900s. As the new musical form spread across the country, countless styles of the blues emerged. Each region imparted its own flavor and culture as jazz, gospel, country, and ragtime all fused with the blues in various combinations to create an endless variety of blues styles. By the 1950s and '60s, the blues had crossed the Atlantic and young audiences and musicians in Great Britain launched a blues revival with their reverent admiration of American blues music.

Chris Backe | Asia Travel Guides, Reviews, Diary, News My last post here – where to go next My time on Travel Wire Asia has been a great one, but they’ll be going in a new direction with the website at some point. I recently finished the transition... Destination: Guinsa – Buddhist high-rises and an elevator inside a temple (Chungcheongbuk-do) Chris in South Korea note: my lady and I went here in mid-November, one of the last weekends where fall was in the air. Life in Korea: Zen and the art of tofu THIS post is dedicated to the omnivore Westerners who say “tofu? Destination: Gwangyang Ornamental Knife Museum (Gwangyang, Jeollanam-do) IT’S happened to every traveler – a place starts off sounding intriguing, but upon arriving seems more ‘meh’ then ‘hey, cool!’. Performance: Teddy Boys, Knock Down, and the Rock Tigers (DGBD, Seoul) CISK note: trying something new with this post – videos!

Spain - On The Road Again How To Pack a Carry-On Like a Boss If you thought my Type-A agenda planning was bordering on madness, you may be even more concerned with the way I pack a suitcase. But ohemgee, this kind of thing gets me completely high. On tour, I was the one designated to pack our gear into the trailer. My whole crew was proud of the way I could maneuver an entire 4-piece band’s touring paraphernalia into a tiny space. I excel at the real-life version of Tetris. When packing for BlogHer ’12, I knew I’d have a lot of stuff to bring along. But airlines have lost my baggage before, and I really cannot imagine surviving NYC with NO clothes and NONE of my blog swag to hand out. Thinking about this made me decide that come hell or high water, my clothes and swag were going in a carry-on. I saw a great slide show from the NYT Business section showing “10 Days in a Carry-On” and it’s a GREAT one. So here’s my show and tell! 7 Bottoms: 4 pairs of shorts2 Skirts1 pair of Jeans 8 Tops: 6 shirts2 Cardigans 3 Pairs of Shoes: 2 Pajamas Unmentionables