How to Solve a Rubik's Cube (Easy Move Notation) 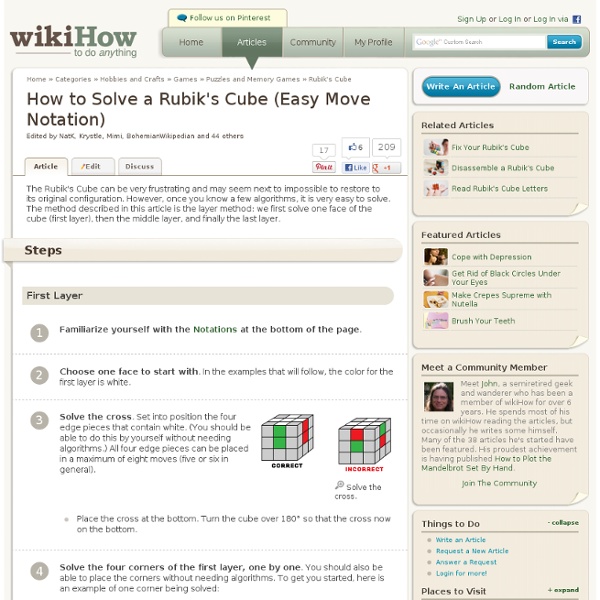 First LayerMiddle LayerLast layerNotations Edited by NatK, Krystle, Mimi, BohemianWikipedian and 59 others The Rubik's Cube can be very frustrating and may seem next to impossible to restore to its original configuration. However, once you know a few algorithms, it is very easy to solve. Ad Steps Method 1 of 4: First Layer 1Familiarize yourself with the Notations at the bottom of the page.Ad 2Choose one face to start with. Method 2 of 4: Middle Layer 1Place the four edges of the middle layer. Method 3 of 4: Last layer 1Permute the corners. Method 4 of 4: Notations 1This is the key to the notations used.The pieces that compose the Rubik's Cube are called Cubies, and the color stickers on the Cubies are called facelets.There are three types of Cubies: The centers (or center pieces), at the center of each face of the Cube. Tips Practice. Related:  How to...

INTEGRAF--How to Make Holograms "Everything should be made as simple as possible, but not simpler” - Albert Einstein We attempt to follow this dictum so you can make holograms easily. The procedures we propose herein are as simple as it is physically possible. In the process, we make holography not only as simple as possible, but safer, less expensive, and more accessible to young people. Most of the essential items described in this article can be found in Integraf's holography kits or are available separately. The kits provide materials for you to make many kinds of holograms, including reflection holograms and transmission holograms. The figure below shows a Class IIIa diode laser with an output of 3 to 4 mW when operated by 3.0 v dc. An excellent support for such a small laser is a wooden clothespin, as shown below. The wooden clothespin offers another advantage. The “white light reflection hologram” is the simplest to make. 4.1 Supplies 4.2 Preparing the object It is not necessary to have a completely dark room.

DORK TOWER HOW TO CHEAT AT EVERYTHING Over lunch with Simon Lovell, a fascinating former card shark, Allison Schrager learns all sorts of things about how swindlers operate ... Special to MORE INTELLIGENT LIFE "I can spot someone's weakness a mile away. In any room I can pick out the best target," says Simon Lovell, reformed con artist and famed magician, when asked over lunch about the root of his talents. "Take that woman over there." "Or that man over there, over-dressed, too neat, over-confident, thinks he is too smart to be taken." "But ultimately, anyone can be conned, if you have the balls to do it." Simon Lovell should know. Presently, instead of subjecting people to cons, Mr Lovell stars in a one-man off-Broadway show, "Strange and Unusual Hobbies". "I could sell shit at an anti-scat party," he says, "you have to figure out someone's wants and needs and convince them what you have will fill their emotional void." It requires avid study of psychology and body language. Con men tend to be excellent conversationalists.

Featured Firefox Extension: FireNes Brings 2000 NES Games to Your Browser (A) This is an emulator written in Java. It's still illegal because the games are still under copyright. Nintendo is still making money off NES games by releasing them through virtual console. (B) If you want to emulate NES games on your computer, free, legally, go take a look over at ConsoleClassix. How is this legal and FireNes not? Twitter: How to archive event hashtags and create an interactive visualization of the conversation Jisc CETIS MASHe The use of Twitter to collecting tweets around an event hashtag allowing participants to share and contribute continues to grow and has even become part of mass media events, various TV shows now having and publicising their own tag. This resource is often lost in time, only tiny snippets being captured in blog posts or summaries using tools like Storify, which often loose the richness of individual conversations between participants. It doesn’t have to be this way. Using a combination of Google Spreadsheets as a data source and a simple web interface to add interactivity it’s possible to let users explorer your entire event hashtag and replay any of conversations. View example conversation replay Try out a LIVE version Update: If you are still struggling to understand the concept Radical Punch have done a overview of this tool Here's how to archive event hashtags and create an interactive visualization of the conversation (written instructions below): Capturing the tweets

EncyGoPedie Bienvenue sur l'EncyGoPedie, le Wiki francophone sur le jeu de Go (appelé aussi weiqi ou baduk). Ce site est coopératif, tout le monde peut le modifier et vous êtes invité à le faire ! Il n'est pas nécessaire de s'inscrire. Apprenez Comment utiliser le Wiki et faites des tests dans le Bac à sable. Recherche rapide (dans les titres de page ; plus d'options sur ChercherUnePage) Dernières Modifications liste les pages récemment modifiées. Merci par avance de nous indiquer les "bugs" rencontrés ou de nous faire part de vos suggestions. L'EncyGoPedie contient 1200 pages.0 pages ont été éditées lors des dernières 24 heures. Quick Guide to Core War OK for all the uninitiated out there, Core War is basically a game played by 2 programs. They're loaded into a simulated computer memory at random locations and their purpose is to kill the other program and avoid being killed. Because the start locations have a strong influence on the outcome many battles must be fought to get a fair assesment of which is the superior warrior. Humans of course "play" Core War by designing the programs which represent them in the tournaments. Most commonly warriors are sent to one of the Hills at either the Stormking or Pizza servers. So wait a second I hear you ask, if only programs which score high enough can reach the hill then why don't all the rubbish programs get pushed off the hill leaving only the top programs with an unassailble grip on the hills? Well either by accident or design the rules of corewar has led to a diversity of warriors where any type of warrior always has something which can beat it. Ah yes the rules.....