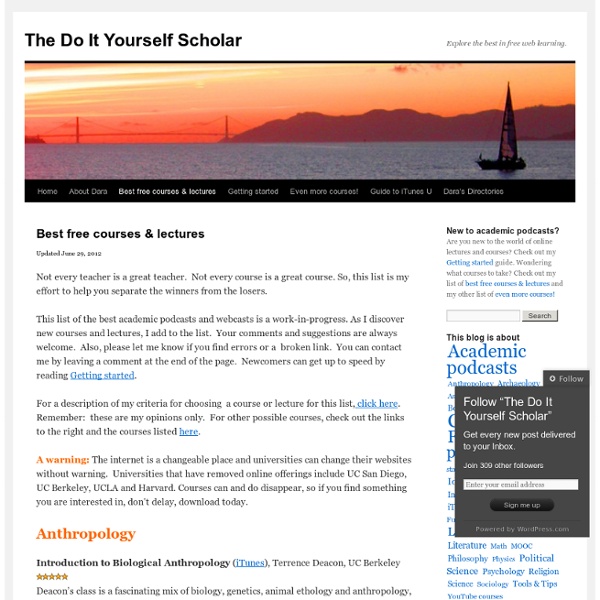 Updated June 29, 2012 Not every teacher is a great teacher. Not every course is a great course. So, this list is my effort to help you separate the winners from the losers. This list of the best academic podcasts and webcasts is a work-in-progress. For a description of my criteria for choosing a course or lecture for this list, click here. A warning: The internet is a changeable place and universities can change their websites without warning. Anthropology Introduction to Biological Anthropology (iTunes), Terrence Deacon, UC Berkeley Deacon’s class is a fascinating mix of biology, genetics, animal ethology and anthropology, as he works his way from single-celled organisms up to human physiology and the evolution of culture. Prehistory and the Birth of Civilization (audio), Tara Carter, UCSD Carter relates the story of hominid evolution and the birth of social organization with infectious enthusiasm. World Prehistory (feed) Tara Carter, UCSD Archaeology/Classics Art History Biology Computers Asia

Open Culture Communications | Video Courses on Academic Earth Communication studies appeals to students with a highly diverse range of interests and goals. In the age of digital content, communication specialists must be fluent in both current and emerging media. They must also be dedicated to presenting information in clear and innovative ways both on and offline — they can choose to work in multiple formats and often dabble in print, online, television or film media. Content-wise, communications students have multiple specialization channels to explore, including politics, public relations, business, and mass media. Throughout their education, communications students will be asked to engage with the public, work on collaborative projects, and hone their speech and writing skills. Sample Courses Communications majors will spend the majority of their time taking courses that emphasize public speaking, writing, and rhetoric. Possible Specializations Degree Types Communications degrees are awarded at both the undergraduate and graduate level. Associate

Media and Culture Please wait while we create your Custom Book... Log In Use the fields below to log in to your Flat World Knowledge user account. Login Forgot your password? Study Aids Downloads Table of Contents Understanding Media and Culture: An Introduction to Mass Communication, v. 1.0 by Jack Lule Chapter 1 Media and Culture The Lost Cell Phone Figure 1.1 A New York City woman lost her cell phone in the back of a taxi cab. The phone was an expensive model, a T-Mobile Sidekick that sold for $350. Evan decided to fight for his friend’s phone—through the media. Sasha and her family were outraged and alarmed. Armed with all this information, Evan contacted Sasha one more time. I thought the story of the lost cell phone would be a great introduction for a text on understanding media and culture and used The New York Times story to write the previous paragraphs. Understanding Media and Culture This book’s title tells its intent. The book’s title, and the book itself, begin with a focus squarely on media. Cancel

Big Think There are only two events in the universe that defy the laws of physics: black holes and the big bang, and while scientists try to explain them, crucial evidence may be eaten up in the meantime. Christophe Galfard's book is "The Universe in Your Hand A Journey Through Space, Time, and Beyond" ( Read more at BigThink.com: Follow Big Think here:YouTube: Transcript - The interesting thing about trying to unravel the laws of nature is that yes, we have found some laws. For a long time gravity has told us that nothing can escape the gravitational grip of a black hole. And everything we had known about black holes until the mid-1970s was only related to gravity.