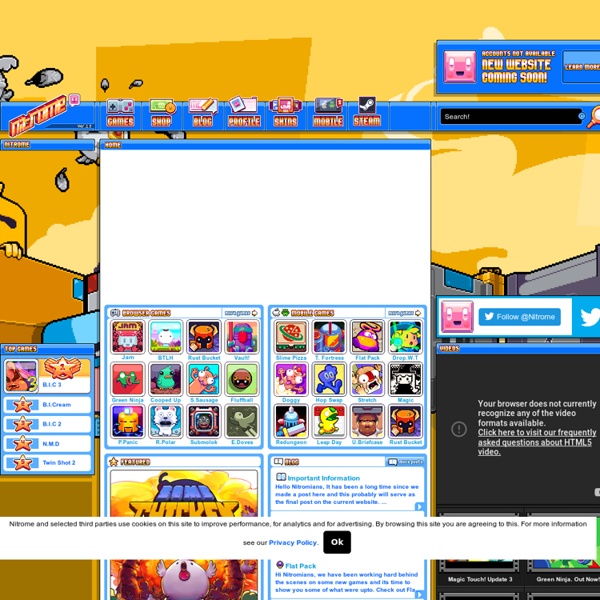 This site requires you to have Javascript and cookies enabled! Play Games at Nitrome.com Icebreaker Ditto changeType New Moon

.: I <3 Cute Games :. I realize I haven’t been blogging about any games in quite a while, which is mostly due to the fact that I no longer have the free time I once had, and also partly due to the fact that my interest in the game market had waned a little. However I recently decided to purchase a 3DS this summer since there will be a bevy of games coming out starting this fall and well on into the future that I know I must play. My rationale for buying the 3DS this summer is that with the titles that will be released this coming holiday season, it will be impossible to find a 3DS this holiday season without camping some random Target or Walmart. Also Target helped sweeten the deal by offering $25 gift cards with a 3DS purchase last week, so naturally I took the bait. I have to say that so far I’m really impressed by the 3D image quality, especially in the free downloadable Pokedex from the shop channel.

Online Riddles Round-up I love computer games but these days I just don’t have the time to play at all. I usually don’t play those 3D monsters unless the game is exceptionally good and I’m very picky (add that my current hardware configuration is less then adorable). But I do like those puzzle type games. One day, I was introduced to online riddles. I just loved them. Play Pokemon - Yellow Version online at playR! The gameplay in Pokemon Yellow is based of the turn-based battle system that was found in Red/Blue version. The player's Pokemon is only allowed to have 4 attacks. Depending on the Pokemon, it could start off with a range of attacks. There are also different types of attacks, such as elemental attacks and physical attacks.

Free games and Flash games KabeyokeRun between moving walls to save the girl. BOXINGA simple punching-based boxing game.Controlled with the keyboard. DICEWARSDice-based strategy game. How quickly can you conquer your foes? COCKROACH DREAMCan you swat away 100 roaches before the sleeping man goes crazy? Casual Gameplay Design Competition #6 — "Explore" Welcome to the 6th Casual Gameplay Design Competition! All entries are available to play immediately.Each entry is represented by an icon on the left.Clicking on an icon will reveal more information about the entry. Click the "Play" button that appears to play the game.A section for comments will also appear, so please provide supportive feedback and constructive criticism to the game designers.The competition judging period is over. Results have been announced!

73 Re-colors of HA2D Hair-01M_Basic (MESH NOT-INCLUDED) Home | Download | Discussion | Help | Site Map | New Posts | Sign in Sign in Mod The Sims Sign in to Mod The Sims Don't have an account? Register now. Dishonored Dishonored is a 2012 stealth action-adventure video game developed by Arkane Studios and published by Bethesda Softworks. It was released worldwide in October 2012 for Microsoft Windows, PlayStation 3, and Xbox 360. Set in the fictional, plague-ridden industrial city of Dunwall, Dishonored follows the story of Corvo Attano, bodyguard to the Empress of the Isles. He is framed for her murder and forced to become an assassin, seeking revenge on those who conspired against him. Corvo is aided in his quest by the Loyalists—a resistance group fighting to reclaim Dunwall, and the Outsider—a powerful being who imbues Corvo with magical abilities.

Stardew Valley Megaguide (for Beginners & Endgamers alike!) [Spoiler Tags] - In Progress -1. Cutscene with Mayor at community center.2. Re-enter community center and read certificate on floor in south-west room.3. Next day, recieve letter from Wizard.4. Visit wizard.5. All Quests Guide @n0regrets: Can I give you a one crushing hug? You have no idea how happy I was with your post! First of all, I hadn't had time to look for the Calamity missing bonus gifts :D Secondly, I was dying to post the guides each at its own post.

Horse Isle 3: Welcome Adventurers Come Join The Infinite Wilds! HI3: Infinite Wilds! (Come join the adventure!) Welcome to the newest in our series of family friendly games made for horse fanatics! Clean, nonviolent fun, with some education tossed in!