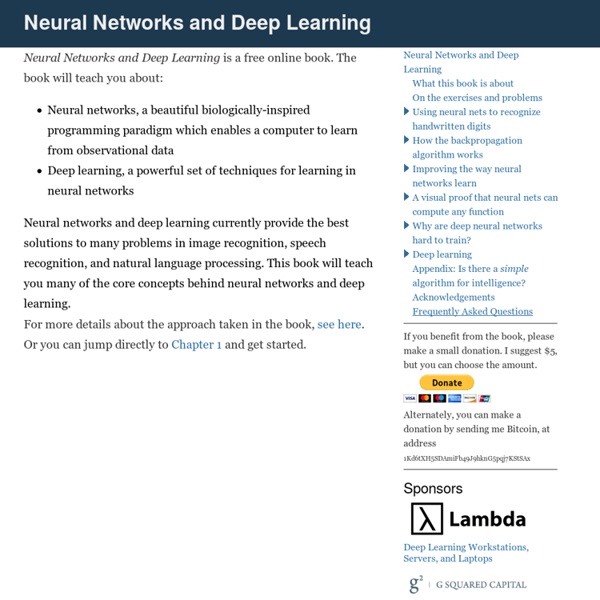 Image Classification using Deep Neural Networks — A beginner friendly approach using TensorFlow Note: You can find the entire source code on this GitHub repo tl;dr We will build a deep neural network that can recognize images with an accuracy of 78.4% while explaining the techniques used throughout the process. Introduction Recent advances in deep learning made tasks such as Image and speech recognition possible. How Can Data Mining & Analytics Enhance Education? Just imagine – what if your educational experience was as personalized as your Netflix or Amazon Account? As more learning occurs online, more data is being generated. Consequently, all of this data can teach us about learners’ behaviors, which can help us improve and personalize education. Take a look at the below infographic and see how educational data mining and learning analytics can help! Embed the image above on your site

A Neural Network Playground Um, What Is a Neural Network? It’s a technique for building a computer program that learns from data. It is based very loosely on how we think the human brain works. First, a collection of software “neurons” are created and connected together, allowing them to send messages to each other. Next, the network is asked to solve a problem, which it attempts to do over and over, each time strengthening the connections that lead to success and diminishing those that lead to failure.

RStudio GPU Workstations in the Cloud with Paperspace We are very pleased to announce the availability of an RStudio TensorFlow template for the Paperspace cloud desktop service. If you don’t have local access to a modern NVIDIA GPU, your best bet is typically to run GPU intensive training jobs in the cloud. Paperspace is a cloud service that provides access to a fully preconfigured Ubuntu 16.04 desktop environment equipped with a GPU. With the addition of the RStudio TensorFlow template you can now provision a ready to use RStudio TensorFlow w/ GPU workstation in just a few clicks. Preconfigured software includes: Bernhard Schölkopf - Max Planck Institute for Biological Cybernetics, Max Planck Institute Bernhard Schölkopf's scientific interests are in the field of machine learning and perception. In particular, he studies support vector and kernel methods for understanding high-dimensional data. He is on the editorial boards of: Journal of Machine Learning Research, an online journal which he helped launch as a founding action editor in early 2000.

Deep_Learning_Project ""Sometimes, we tend to get lost in the jargon and confuse things easily, so the best way to go about this is getting back to our basics. Don’t forget what the original premise of machine learning (and thus deep learning) is - IF the input and output are related by a function y=f(x), then if we have x, there is no way to exactly know f unless we know the process itself. However, machine learning gives you the ability to approximate f with a function g, and the process of trying out multiple candidates to identify the function g best approximating f is called machine learning. Ok, that was machine learning, and how is deep learning different? Deep learning simply tries to expand the possible kind of functions that can be approximated using the above mentioned machine learning paradigm. If you want to know the mathematics of it, go read about VC dimension and how more layers in a network affect it.

How This Teen Is Using Artificial Intelligence To Stop Gun Violence By Samantha Walravens Just days after a gunman shot and killed 17 people at Marjory Stoneman Douglas High School in Parkland Florida in February, Shreya Nallapati, a 17-year old high school senior from Highlands Ranch, Colorado, declared “a technological revolution against mass shootings, specifically in schools.” Fed up with the lack of action being taken by government officials and leaders to end mass shootings, Nallapati decided to take what she knew best-- technology -- and apply it in a way that would make a lasting impact. Unveiling the Hidden Layers of Deep Learning In a recent Scientific American article entitled “Springtime for AI: The Rise of Deep Learning,” computer scientist Yoshua Bengio explains why complex neural networks are the key to true artificial intelligence as people have long envisioned it. It seems logical that the way to make computers as smart as humans is to program them to behave like human brains. However, given how little we know of how the brain functions, this task seems more than a little daunting. So how does deep learning work? This visualization by Jen Christiansen explains the basic structure and function of neural networks.

lime v0.4: The kitten picture edition The meat of this release centers around two new features that are somewhat linked: Native support for keras models and support for explaining image models. keras and images J.J. Allaire was kind enough to namedrop lime during his keynote introduction of the tensorflow and keras packages and I felt compelled to support them natively. AI Horizon: Introduction to Machine Learning Machine Learning, Part I: Supervised and Unsupervised Learning (Up to General AI) Machine Learning, Part II: Supervised and Unsupervised Learning Last time, we discussed two types of learning that were based on the result of learning. Deep Learning with Python Deep learning is applicable to a widening range of artificial intelligence problems, such as image classification, speech recognition, text classification, question answering, text-to-speech, and optical character recognition. It is the technology behind photo tagging systems at Facebook and Google, self-driving cars, speech recognition systems on your smartphone, and much more. In particular, Deep learning excels at solving machine perception problems: understanding the content of image data, video data, or sound data. Here's a simple example: say you have a large collection of images, and that you want tags associated with each image, for example, "dog," "cat," etc. Deep learning can allow you to create a system that understands how to map such tags to images, learning only from examples.

Lesson Plans – Search Education – Google Picking the right search terms Beginner Pick the best words to use in academic searching, whether students are beginning with a full question or a topic of just a few words. View lesson Advanced Explore "firm" and "soft" search terms, and practice using context terms to locate subject-specific collections of information on the web.

AI just defeated a human fighter pilot in an air combat simulator Retired United States Air Force Colonel Gene Lee recently went up against ALPHA, an artificial intelligence developed by a University of Cincinnati doctoral graduate. The contest? A high-fidelity air combat simulator. And the Colonel lost. In fact, all the other AI’s that the Air Force Research Lab had in their possession also lost to ALPHA…and so did all of the other human experts who tried their skills against ALPHA’s superior algorithms.