A Brief History of CNNs in Image Segmentation: From R-CNN to Mask R-CNN. Python Programming Tutorials. With that, let's talk about moving forward. 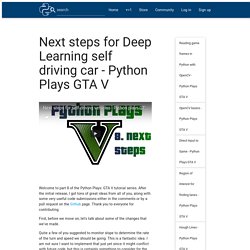 The plan so far has been to first come up with some basic driving rules, and hopefully detect whether or not we were between two lanes. What we ended up with was actually a half-baked algorithm that could drive, which is more than I was expecting to get in such short order, but I'll take it. Now, the next scheduled step was to begin to train a neural network to play. Why did we start with the basic rules? 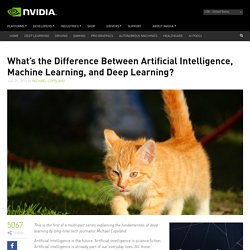 RL is hot! You may have noticed that computers can now automatically learn to play ATARI games (from raw game pixels!) , they are beating world champions at Go, simulated quadrupeds are learning to run and leap, and robots are learning how to perform complex manipulation tasks that defy explicit programming. The Truth About Deep Learning - Quantified. Come on people — let’s get our shit together about deep learning.

I’ve been studying and writing about DL for close to two years now, and it still amazes the misinformation surrounding this relatively complex learning algorithm. This post is not about how Deep Learning is or is not over-hyped, as that is a well documented debate. Rather, it’s a jumping off point for a (hopefully) fresh, concise understanding of deep learning and its implications. Guest Post (Part I): Demystifying Deep Reinforcement Learning - Nervana. Two years ago, a small company in London called DeepMind uploaded their pioneering paper “Playing Atari with Deep Reinforcement Learning” to Arxiv.

In this paper they demonstrated how a computer learned to play Atari 2600 video games by observing just the screen pixels and receiving a reward when the game score increased. The result was remarkable, because the games and the goals in every game were very different and designed to be challenging for humans. Neural networks and deep learning. 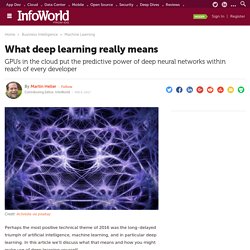 In this article we'll discuss what that means and how you might make use of deep learning yourself. Perhaps you noticed in the fall of 2016 that Google Translate suddenly went from producing, on the average, word salad with a vague connection to the original language to emitting polished, coherent sentences more often than not -- at least for supported language pairs, such as English-French, English-Chinese, and English-Japanese. That dramatic improvement was the result of a nine-month concerted effort by the Google Brain and Google Translate teams to revamp Translate from using its old phrase-based statistical machine translation algorithms to working with a neural network trained with deep learning and word embeddings employing Google's TensorFlow framework. 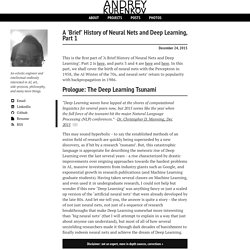 Part 2 is here, and parts 3 and 4 are here and here. In this part, we shall cover the birth of neural nets with the Perceptron in 1958, the AI Winter of the 70s, and neural nets’ return to popularity with backpropagation in 1986. “Deep Learning waves have lapped at the shores of computational linguistics for several years now, but 2015 seems like the year when the full force of the tsunami hit the major Natural Language Processing (NLP) conferences.” -Dr.