Building a React-based Chat Client with Redux. Chatbots as a delivery mechanism – Alberto Romero. The delivery mechanism is the part of our application that our clients use to execute a platform/application functionality, but it’s not the part that should define the application logic, the business logic ideally should be defined in another layer isolated from External Systems APIs, Databases, etc. 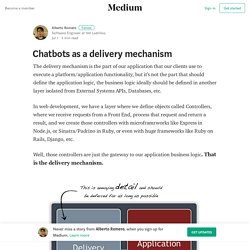 The AI Guru Behind Amazon, Uber, and Unity Explains What AI Really Is. If you’ve ever gotten product recommendations on Amazon, you’ve seen Danny Lange’s handiwork. 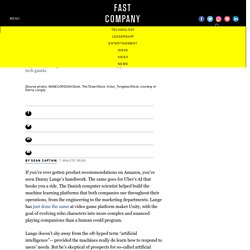 The same goes for Uber’s AI that books you a ride. The Danish computer scientist helped build the machine learning platforms that both companies use throughout their operations, from the engineering to the marketing departments. Lange has just done the same at video game platform maker Unity, with the goal of evolving robo characters into more complex and nuanced playing companions than a human could program. Lange doesn’t shy away from the oft-hyped term “artificial intelligence”— provided the machines really do learn how to respond to users’ needs. Data labeling for machine learners. Can AIs be Psychotherapists and/or friends, offering us emotional fulfillment? : C_S_T. The Internet Will Become Self-Aware When Aliens Wake It Up. The Data That Turned the World Upside Down - Motherboard. This article was originally published January 28, 2017. Update: March 17, 2018: Facebook lawyer Paul Grewal announced in a blog post Friday that the company has suspended Strategic Communication Laboratories and its data analytics firm, Cambridge Analytica, from the platform.

According to Facebook, Aleksandr Kogan lied about deleting data that he obtained from a Facebook personality test and improperly passed it to third parties. As we and others have reported, Cambridge Analytica ultimately partnered with the Donald Trump campaign to leverage the data of millions of Facebook users to target them with advertisements and campaign material. The original investigation into Cambridge Analytica, published on Motherboard in January 2017 and in German in Das Magazin in December 2016, follows below. On November 9 at around 8.30 AM., Michal Kosinski woke up in the Hotel Sunnehus in Zurich. Program an SMS Bot Using Python and Twilio. AdobeStock/Kitja This winter I went to Utah with some friends, and explored some of the most remote and beautiful places in the world. 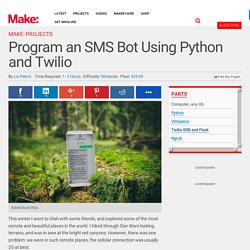 I hiked through Star Wars looking terrains, and was in awe at the bright red canyons. However, there was one problem: we were in such remote places, the cellular connection was usually 2G at best. 2G is just enough to send a text message, but it cannot load The Weather Channel. Foundations of Statistical Natural Language Processing.

Chatbot Fundamentals: An interactive guide to writing bots in Python. Gunthercox/ChatterBot: ChatterBot is a machine learning, conversational dialog engine for creating chat bots. Computers Speaking in Irish. Most of us use computer terminals, tablets and smart phones, absorbing information quickly and easily. 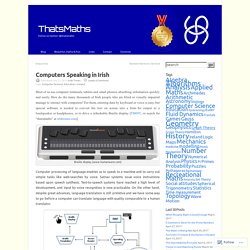 How do the many thousands of Irish people who are blind or visually impaired manage to interact with computers? For them, entering data by keyboard or voice is easy, but special software is needed to convert the text on screen into a form for output to a loudspeaker or headphones, or to drive a refreshable Braille display [TM095, or search for “thatsmaths” at irishtimes.com]. Braille display (www.humanware.com) Computer processing of language enables us to speak to a machine and to carry out simple tasks like web-searches by voice. Satnav systems issue voice instructions based upon speech synthesis. Minds and Computers: An Introduction to the Philosophy of Artificial Intelligence (9780748620999): Matt Carter: Books. This Is How AI Will Change Your Work In 2017. Artificial intelligence is growing fast. 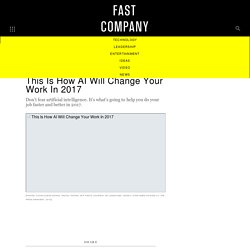 Recent research puts it as a $5 billion market by 2020, and Gartner estimates that 6 billion connected “things” will require AI support by 2018. Connected machines, wearables, and other business tools like voice assistants are already boosting productivity at work and at home. Two reports just surfaced that tackle the troubling predictions that automation, artificial intelligence, and robots are going to supplant human workers. The McKinsey Global Institute and Glassdoor research indicates that we don’t have to worry that we humans will become obsolete. Matt Gould, chief strategy officer at Arria NLG, U.K. 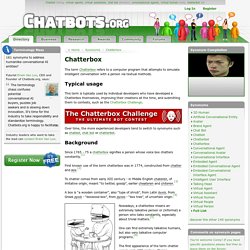 Typical usage This term is typically used by individual developers who have developed a Chatterbox themselves, improving their creations all the time, and submitting them to contests, such as the Chatterbox Challenge. Over time, the more experienced developers tend to switch to synonyms such as chatbot, chat bot or chatterbot. Background. Guide to the Sequential model - Keras Documentation. The Sequential model is a linear stack of layers. You can create a Sequential model by passing a list of layer instances to the constructor: from keras.models import Sequential from keras.layers import Dense, Activation model = Sequential([ Dense(32, input_shape=(784,)), Activation('relu'), Dense(10), Activation('softmax'), ]) You can also simply add layers via the .add() method: model = Sequential() model.add(Dense(32, input_dim=784)) model.add(Activation('relu')) Specifying the input shape The model needs to know what input shape it should expect. 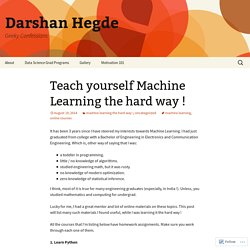 I had just graduated from college with a Bachelor of Engineering in Electronics and Communication Engineering. Which is, other way of saying that I was: a toddler in programming.little / no knowledge of algorithms.studied engineering math, but it was rusty.no knowledge of modern optimization.zero knowledge of statistical inference. 7 Steps to Mastering Machine Learning With Python. Getting started. 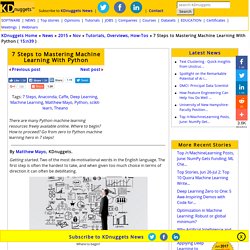 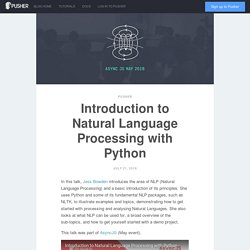 SpaCy Usage Documentation. On this page, we'll be featuring demos, libraries and products from the spaCy community. 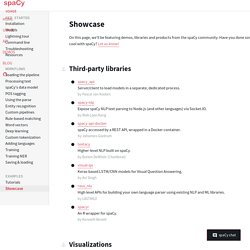 Have you done something cool with spaCy? Let us know! Third-party libraries. True AI is both logically possible and utterly implausible. Suppose you enter a dark room in an unknown building. You might panic about monsters that could be lurking in the dark. Or you could just turn on the light, to avoid bumping into furniture. The dark room is the future of artificial intelligence (AI). Science AMA Series: I'm Joanna Bryson, a Professor in Artificial (and Natural) Intelligence. I am being consulted by several governments on AI ethics, particularly on the obligations of AI developers towards AI and society. I'd love to talk – AMA! : scien. Keras/imdb_fasttext.py at master · fchollet/keras. Nlp - How can i cluster document using k-means (Flann with python)? Design and Implementation of an Intelligent Mobile Game. Eager learning - Wikipedia. Lazy learning - Wikipedia. Lazy learning - Wikipedia. Nearest centroid classifier - Wikipedia.