10 Tips on Writing from David Ogilvy 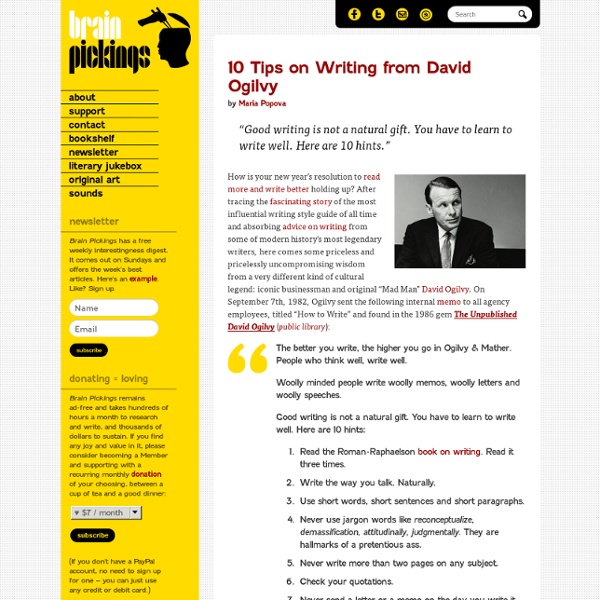 by Maria Popova “Good writing is not a natural gift. You have to learn to write well. Here are 10 hints.” The better you write, the higher you go in Ogilvy & Mather. People who think well, write well.Woolly minded people write woolly memos, woolly letters and woolly speeches.Good writing is not a natural gift. This, and much more of Ogilvy’s timeless advice, can be found in The Unpublished David Ogilvy, a fine addition to this ongoing archive of notable wisdom on writing. via Lists of Note Donating = Loving Bringing you (ad-free) Brain Pickings takes hundreds of hours each month. You can also become a one-time patron with a single donation in any amount: Brain Pickings has a free weekly newsletter. Share on Tumblr

How to Write with Style: Kurt Vonnegut’s 8 Keys to the Power of the Written Word Find a Subject You Care About Find a subject you care about and which you in your heart feel others should care about. It is this genuine caring, and not your games with language, which will be the most compelling and seductive element in your style. Communications Lessons from the Tillman and Lynch Revelations - Kathy Bloomgarden by Kathy Bloomgarden | 4:15 PM April 27, 2007 Today’s Conversation Starter comes from Kathy Bloomgarden, CEO of public relations giant Ruder-Finn, and author of Trust: The Secret Weapon of Effective Business Leaders. Bloomgarden offers her thoughts on the recent revelations about Pat Tillman and Jessica Lynch from a communications perspective. The recent revelations about Pat Tillman and Jessica Lynch, finally getting at the truth years after each event, is our latest reminder that crises are complex, that it is often difficult to get the straight story, and that the cover-up is almost always worse than the crime.

Scientists don't understand journalism Have you heard of Futurity? How about The Conversation? In different ways, these sites and others are bypassing the traditional media model – cutting out the journalist middleman and letting researchers speak more directly to the public. In the case of Futurity, which is backed by a growing number of research-intensive universities, university press officers act as mediators with the site posting more-or-less edited "stories" (press releases) that are uncontaminated by any sordid contact with the grubby mitts of the reporting classes. The Conversation, based in Melbourne, is a more interesting hybrid with hacks drafted in to commission and edit contributions from academics. There's nothing wrong with these sites.

The Daily Routines of Famous Writers By Maria Popova UPDATE: These daily routines have now been adapted into a labor-of-love visualization of writers’ sleep habits vs. literary productivity. Kurt Vonnegut’s recently published daily routine made we wonder how other beloved writers organized their days. So I pored through various old diaries and interviews — many from the fantastic Paris Review archives — and culled a handful of writing routines from some of my favorite authors. Enjoy.

Henry Miller’s 11 Commandments of Writing & Daily Creative Routine After David Ogilvy’s wildly popular 10 tips on writing and a selection of advice from modernity’s greatest writers, here comes some from the prolific writer and painter Henry Miller (December 26, 1891–June 7, 1980) COMMANDMENTSWork on one thing at a time until finished.Start no more new books, add no more new material to ‘Black Spring.’Don’t be nervous. Work calmly, joyously, recklessly on whatever is in hand.Work according to Program and not according to mood. Stop at the appointed time!

These ‘Color Thesaurus’ Charts Let You Correctly Name Any Color Imaginable Ingrid Sundberg, a writer and children’s book illustrator, created a very useful infographic chart for anyone struggling with color names. The writer says that she loves to collect words that can help give her stories variety and depth. Show Full Text “I’ve learned that we all have different associations with color words,” Sundberg told Bored Panda. The Seven Habits of Highly Effective People The 7 Habits of Highly Effective People, first published in 1989, is a business and self-help book written by Stephen R. Covey.[1] Covey presents an approach to being effective in attaining goals by aligning oneself to what he calls "true north" principles of a character ethic that he presents as universal and timeless. The 7 Habits[edit] The book first introduces the concept of paradigm shift and helps the reader understand that different perspectives exist, i.e. that two people can see the same thing and yet differ with each other. On this premise, it introduces the seven habits in a proper order.

The erosion in the paid media pyramid Since the invention of media (the book, the record, the movie...), there's been a pyramid of value and pricing delivered by those that create it: Starting from the bottom: Free content is delivered to anyone who is willing to consume it, usually as a way of engaging attention and leading to sales of content down the road. This is the movie trailer, the guest on Oprah, the free chapter, the tweets highlighting big ideas.