Pictures without pity. Which image of Africa would you rather see: skeletal, abandoned child, or healthy-looking working family? 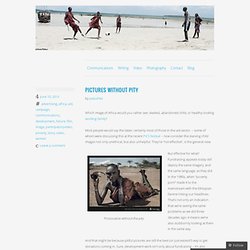 'Development' in the cinema - WB. The World's Best News. Telling the Good News Stories about Development. 02/07/2013 at 1:49 pm In September this year, the international community meets in New York once more, to “take stock” of the progress towards the world’s anti-poverty goals. 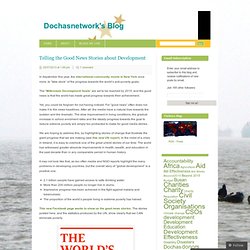 The “Millennium Development Goals” are set to be reached by 2015, and the good news is that the world has made great progress towards their achievement. Yet, you could be forgiven for not having noticed. Our image of Africa is hopelessly obsolete. Think of Ethiopia and what do you see. 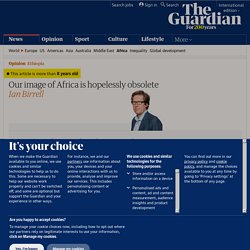 Perhaps a starving child, flies in her eyes and belly distended. Painfully thin adults in raggedy clothes, staring balefully at the camera in a fetid refugee camp. Or possibly a famous self-declared saviour from the west, striding purposefully past the decaying corpse of an animal beside a dusty road. Think again. See, instead, a booming capital city, its cafes filled with graduates and cranes lining the horizon. Few countries symbolise the disconnect between outdated western perceptions of Africa and fast-changing realities on the ground better than Ethiopia, the continent's second most-populous nation, whose long-serving leader, Meles Zenawi, died last week.

Last week, Africa was in the news over the shooting of striking miners in South Africa, a disturbing echo of the dark days of apartheid. Starvation Photography – The ethics of capturing human suffering. 23/07/2011 at 9:22 am. 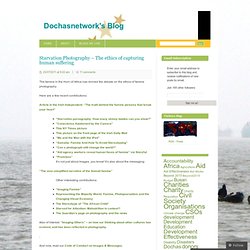 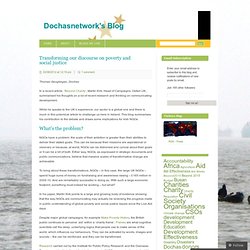 While he speaks to the UK’s experience, our sector is a global one and there is much in this polemical article to challenge us here in Ireland. This blog summarises his contribution to the debate and draws some implications for Irish NGOs. What’s the problem? NGOs have a problem: the scale of their ambition is greater than their abilities to deliver their stated goals. To bring about these transformations, NGOs – in this case, the large UK NGOs – spend huge sums of money on fundraising and awareness raising – £165 million in 2009-10. Despite major global campaigns, for example Make Poverty History, the British public continues to perceive ‘aid’ within a ‘charity frame’. Seven Tips for Shifting a Mindset in Your Organization - John Butman. By John Butman | 8:00 AM August 12, 2013 We're all fascinated by new ideas and how they can grab hold of us, influencing how we think and affecting how we take action.

How does Atul Gawande (the checklist doctor) get inside my head, when others don't? Why does Gwyneth Paltrow make me adjust my behaviors, when others can't? In business, especially, we're inundated with new ideas—so many we can hardly process or evaluate them. Communicating results. The UN just recently finalized its “Quadrennial Comprehensive Policy Review of operational activities for development” which gives an overview of the priorities for operational reform of the UN’s Development work for the next 4 years. 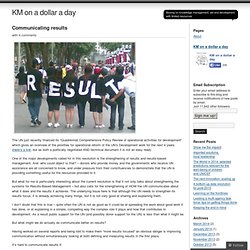 (Here’s a link, but as both a politically negotiated AND technical document it is not an easy read). One of the major developments called for in this resolution is the strengthening of results and results-based management. Dóchas Code of Conduct on Images and Messages. Images & Messages - a human right. Code of Conduct on social media. Code of Conduct: Key Resources.

Do aid agencies skew the debate?

The Role of Brand in the Nonprofit Sector. Many nonprofits continue to use their brands primarily as a fundraising tool, but a growing number of nonprofits are developing a broader and more strategic approach, managing their brands to create greater social impact and tighter organizational cohesion. 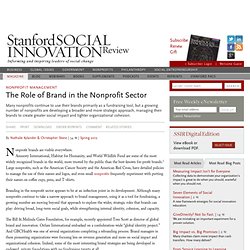 Nonprofit brands are visible everywhere. Amnesty International, Habitat for Humanity, and World Wildlife Fund are some of the most widely recognized brands in the world, more trusted by the public than the best-known for-profit brands.1 Large nonprofits, such as the American Cancer Society and the American Red Cross, have detailed policies to manage the use of their names and logos, and even small nonprofits frequently experiment with putting their names on coffee cups, pens, and T-shirts. Branding in the nonprofit sector appears to be at an inflection point in its development.

The Bill & Melinda Gates Foundation, for example, recently appointed Tom Scott as director of global brand and innovation. Why Can't We Sell Charity Like We Sell Perfume? The early Puritan settlers in the New World were pulled in opposite directions by competing value systems. 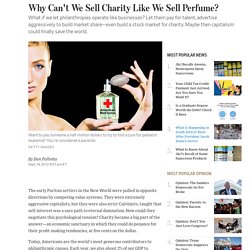 They were extremely aggressive capitalists, but they were also strict Calvinists, taught that self-interest was a sure path to eternal damnation. How could they negotiate this psychological tension? Winning the Story Wars - The Hero's Journey (2012) The Smallest Nonprofits Should Have The Most Powerful Brands. (Product) Red. 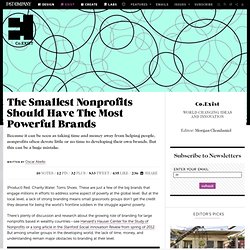 Charity:Water. Toms Shoes. These are just a few of the big brands that engage millions in efforts to address some aspect of poverty at the global level. Finding Frames: New ways to engage.

Public attitudes to Development (Irl & abroad) Lise Vesterlund: Why do people give. Africans as Animals in the Western Imagination. I have always felt an inexplicable discomfort when conversations about Africa turn to the topic of wildlife. 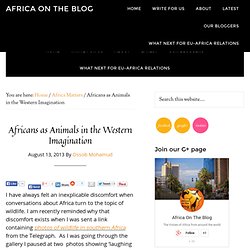 I am recently reminded why that discomfort exists when I was sent a link containing photos of wildlife in southern Africa from the Telegraph.