Why Storytelling Is The Ultimate Weapon 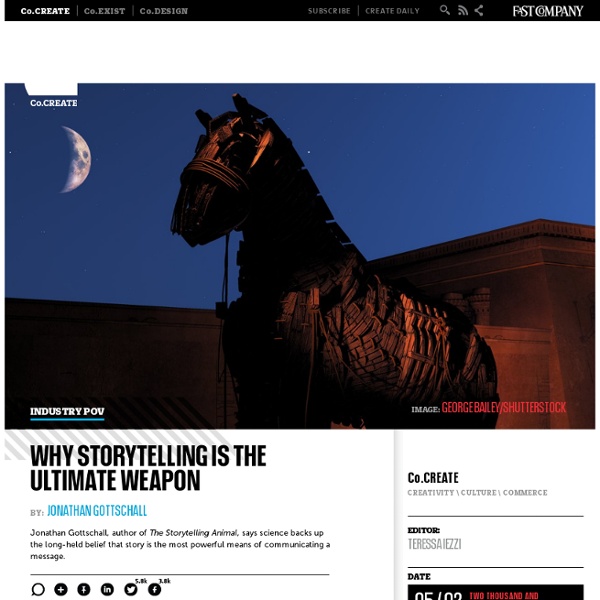 In business, storytelling is all the rage. Without a compelling story, we are told, our product, idea, or personal brand, is dead on arrival. In his book, Tell to Win, Peter Guber joins writers like Annette Simmons and Stephen Denning in evangelizing for the power of story in human affairs generally, and business in particular. Guber argues that humans simply aren’t moved to action by “data dumps,” dense PowerPoint slides, or spreadsheets packed with figures. People are moved by emotion. The best way to emotionally connect other people to our agenda begins with “Once upon a time…” Plausible enough. I think it’s a real insight. Until recently we’ve only been able to speculate about story’s persuasive effects. What is going on here? And, in this, there is an important lesson about the molding power of story. This is exactly Guber’s point. Guber tells us that stories can also function as Trojan Horses. Guber’s book is relentlessly optimistic about the power of story to persuade.

Infographic: Storytelling Vs. Corporate Speak Visual storytelling demands a place in any organization’s business communications. Photos, graphics, charticles – apparently, when it comes to fish, what happens in Vegas does not stay in Vegas – etc. all provide storytelling fodder. Which brings me to the infographic. You could make an argument that the infographic is the new black. Beyond the visual appeal, infographics push companies to communicate at the industry level. After assisting clients in creating infographics, we’ve created our own on storytelling.

Erik Davis - On-gurus To say that we live in a post-secular era does not mean that we are done with the disenchantments of modernity, or that religion – goddess forbid – will regain its previous hold over human affairs. True, many of the convictions and clarities that once undergirded modern secular society have dissolved, leaving many things — including our rational selves — up for grabs. But while radical atheists can rant all they want, the resonant claims of religion and the insistent calls of the spirit remain far from ‘behind’ us.The major religions are not leaving the world stage anytime soon, and what is more the largely secular zone that the global elites now inhabit plays host to a wide array of spiritual identities and transformative practices, of which yoga, meditation, and some manner of Buddhism are only the most visible. Gandhi (his real name) was born in New Jersey and is an alumnus of Columbia University. Gandhi lets the viewer in on the secret at the beginning of his film.

The Politics of Moving Minds By Mark Rolston - June 15, 2012 Innovation is not a science. Much of it has the elusive qualities of art, dressed up as useful things. But business leaders continue to try and invest in innovation as if it were a science. And too often, the designers they employ as consultants engage with these leaders not only as if it were an art but also as if their clients understood how to speak in “creative” terms. 2012 Example Investor Pitch Deck and Discussion  This is the updated, 2012 version of the ReOverthinking start-up pitch deck; since the first version was written in 2009, this post and it’s predecessors has been read on average 50 times a day…often more than that. I really hope this indicates the number of entrepreneurs that are thinking about or working on a start-up. Please use comments to ask questions and make suggestions for the next version.

Giving Your Brand Primal Power Through Storytelling “Once upon a time…” Those four little words, when combined, have an amazing allure, simply because we know that they signify that something special is about to happen…a story. Humanity has used stories from the beginning to bind communities, create movements, inspire religions, and promote patriotism. From cave drawings to campfire tales, from papyrus writings to the Gutenberg Bible, our species has always rallied around stories--narratives that had the ability to hit us where we live and take us to someplace new. At our agency, we make what we call “story-selling” an essential component of our branding efforts with our clients.

Tools and Worksheets Story-based Strategy Model: Grassroots Organizing Meets Narrative Power Integrating story-based strategy into your campaign planning: This chart provides a step-by-step method for applying the story-based strategy approach to planning a campaign and taking creative action. This worksheet provides a checklist of qualities that help create an effictive message, and a memorable acronym. Point of Intervention Worksheet Our 7 Tenets of Future Storyworlds At the European Broadcast Union (EBU) TV Summit in Copenhagen last week, Transmedia Storyteller Ltd founder and CEO, Robert Pratten, presented our vision for future storyworlds: PERVASIVE – Available on any device, anywhere and at any time. Blurs real world and fictional world.

OPINION – A guide to Irish innovators on raising money - Start Ups - Start-Ups In the second part of a series of guest posts Silicon Valley venture capitalist Richard Moran reveals the secrets to a perfect pitch for Irish innovators hoping to secure investment for their business ideas. Richard Moran is a Partner in Irish Technology Capital, a member of the Irish Technology Leadership Group (ITLG) and the CEO of Accretive Solutions. He is a former Partner at venture capital firm Venrock. In part one of this series 'Blind Squirrels and Acorns, A Primer for Irish Entrepreneurs' Moran explored such topics as Being Irish, the Infinite Demand for the Unavailable and the importance of being able to explain what IT is.

Discussion: Storytelling and success stories I’ve not been able to keep up with all threads but it seems there have been a number of interesting discussions over the past few days covering various aspects of the role of data visualisation and what we should expect from it. Thought I’d join the party late and throw in a few thoughts of my own as I was planning on writing something about these subjects anyway. Firstly, I would recommend you take a look at Moritz Stefaner’s post about the different functions of visualisations – those that tell (or more specifically show) stories and those that don’t. I particularly suggest you read the comment responses at the bottom of the post, I haven’t read them word-for-word but skimming through reveals some good discussions in there. Interestingly, you can see how often the nuances and semantics of the written word are at the root of many disagreements about perspectives when they are actually the same views just articulated differently. The main issue is what does success look like?

VATSIM - Pilot Resource Centre (PRC) Navigation Charts and Flight Planning Tools Created and Maintained by Neil Dewson-Smyth and Chad Black Last update 070121 - MB There are hundreds of places that navigation charts can be found, both on the internet and at local flying shops. The links provided on this page are for flight simulation use only and are not posted for use in real world aviation. Please note that all links are to external websites over which we have no control. Sites may be VATSIM related or in many cases are real world AIP (Aeronautical Information Publication) stories & organizations: Archive story practice note, third and final part In which we explore the ‘felts’ of stakeholder points of view, Who am I stories, metaphorical equipment, small stories that make a big difference, story listening, finding practice partner, and a few useful references to go exploring in. We end with collectors template. stakeholders The word stakeholder is dangerously abstract, and there’s a tendency to see stakeholders as an amorphous blob, or as an abstract, or even menacing concept.

Self-Imposed Gurudom Story Learnings: Plot #1 - Overcoming the Monster I am trawling my way through Chris Booker's excellent tome on storytelling The Seven Basic Plots - Why We Tell Stories. Booker has basically over a life-time gone through the massive mountain of storytelling from the Sumerian epic of Gilgamesh to present day James Bond movies, comparing and cross referencing as he went along, until he managed to successfully distil the sum total of man's prolific storytelling through the ages into no more than 7 basic, but distinct plots. Obviously there are very interesting psychological reasons why these essentially same stories have occurred since the beginning of man's history. It is also very interesting and worthwhile to storytellers to note what happens, when you try to bend or disregard the rules governing storytelling, as you end up with a product sadly lacking in impact and satisfaction.