The Role of Brand in the Nonprofit Sector 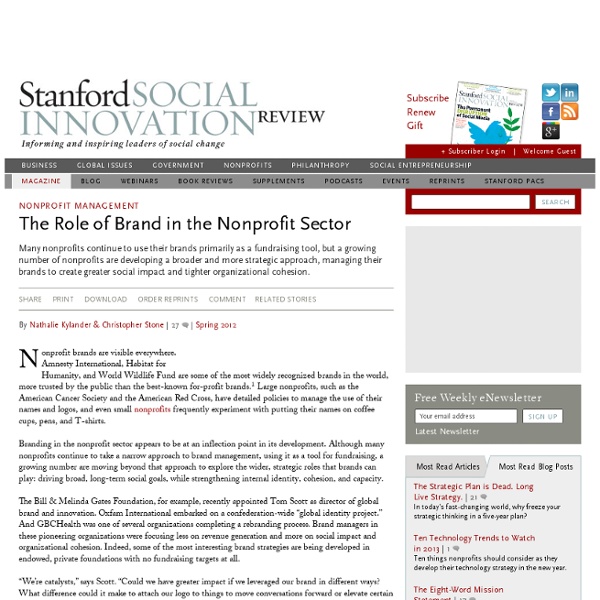 Many nonprofits continue to use their brands primarily as a fundraising tool, but a growing number of nonprofits are developing a broader and more strategic approach, managing their brands to create greater social impact and tighter organizational cohesion. Nonprofit brands are visible everywhere. Amnesty International, Habitat for Humanity, and World Wildlife Fund are some of the most widely recognized brands in the world, more trusted by the public than the best-known for-profit brands.1 Large nonprofits, such as the American Cancer Society and the American Red Cross, have detailed policies to manage the use of their names and logos, and even small nonprofits frequently experiment with putting their names on coffee cups, pens, and T-shirts. Branding in the nonprofit sector appears to be at an inflection point in its development. The Bill & Melinda Gates Foundation, for example, recently appointed Tom Scott as director of global brand and innovation. “We’re catalysts,” says Scott.

Obama Campaign’s Vast Effort to Re-Enlist ’08 Supporters Daniel Borris for The New York Times Inside a Chicago office complex, Obama aides sift through reams of data about supporters. Daniel Borris for The New York Times There may always be a role for campaign buttons, but inside the Prudential Plaza building, the Obama re-election team is taking a much more high-tech approach. But it is home to the largely secret engine of ’s re-election campaign, where scores of political strategists, data analysts, corporate marketers and Web producers are sifting through information gleaned from Facebook, voter logs and hundreds of thousands of telephone or in-person conversations to reassemble and re-energize the scattered coalition of supporters who swept Mr. Mr. But a huge part of the effort here is dedicated to less flashy yet potentially vital behind-the-scenes work to address some of Mr. So Mr. Campaign officials said the Republican fight for the nomination had bought them critical time to develop their campaign machinery.

Hauser Center for Nonprofit Organizations - Role of Brand in the Nonprofit Sector David Fenton CEO and Founder, Fenton This report is a sign of a great deal of progress. 30 years ago I could barely convince nonprofit groups to hire press secretaries or focus on communications. Even today many groups and philanthropists are uncomfortable with the concepts of marketing and branding. They understandably fear that simplifying messages means distorting them – but this need not, and should never be true. In the modern world, being opposed to branding is being opposed to contemporary forms of effective action. Emily Brew Brand Creative Director, The Nike Foundation This Hauser Center work and the ideas it contains are rebranding ‘brand’ for nonprofits. Ingrid Srinath Secretary General, CIVICUS: World Alliance for Citizen Participation The truth consistently well told has always seemed to me to be the secret of powerful, durable brands. Marinke van Riet International Director, Publish What You Pay Kate Roberts Vice President of Corporate Marketing and Communications, PSI Asif Saleh

Invisible Children’s ‘Kony 2012’ video goes viral — but what does this mean? Still, the clicks poured in. As of Friday afternoon, almost 71 million people had watched the video on YouTube or Vimeo; millions more were tweeting about the film using the hashtag #StopKony. Invisible Children chief executive Ben Keesey says he’s been in “absolute shock” over the video’s success. He had been hoping for 500,000 views by May. “Anybody who does advocacy on this or any other issue is looking very closely at what Invisible Children has done,” says Ethan Zuckerman, a senior researcher at Harvard’s Berkman Center for Internet and Society. The film, directed by and starring activist filmmaker Jason Russell, is a compelling and watchable narrative. The hype and hyperbole surrounding “Kony 2012” swelled in the span of a week, but the true test for what it signifies — for the Internet, for activism, for how people want to interact with the world around them — won’t be measurable until April 20 and beyond. Plenty of good causes have gone viral online.

Frances Beinecke: Major League Sports Show Americans -- And Lawmakers -- the Power of Sustainability Last week I stood on Safeco Field, the home of the Seattle Mariners, and watched Major League Baseball Commissioner Bud Selig receive an award for his leadership in greening sports. He told the crowd that environmental stewardship makes sense to anyone who loves baseball and loves to see it played on green grass under blue skies. Selig's remarks were a welcome antidote to the current political vitriol. During the Green Sports Alliance conference in Seattle last week, I heard 500 leaders from Major League Baseball, the National Hockey League, the National Basketball Association, and NASCAR describe their remarkable progress in saving energy, generating power from wind and solar, conserving water, and cutting down on food and paper waste. You realize just how out-of-step anti-environmental lawmakers are when a $400 billion industry with hundreds of millions of fans is busy installing solar panels and expanding recycling programs. Sports are a powerful force in American culture.

10 Nonprofit Books from 2010 During 2010, I been able to read, blurb, write reviews, do blog giveaways, or author guest posts and interviews for a lot of terrific books that would be useful to nonprofit professionals in the social media, marketing, and ICT areas. Many authors generously sent me review copies . I also have a small pile of books sitting on my desk that I wanted to blog about. So, to close out the year, I thought I’d share this list of books with you, especially if Santa gave you an Amazon gift card. 1. I read the manuscript over the summer so I could blurb this book. Digital Activism was one of several books I gave to my friends at iHub in Nairobi. 2. Digital activism is defined by the Meta-Activism Project as “the practice of using digital technology for political and social change.” 3. Nedra Kline Weinreich is a social marketing whiz kid. 4. I met Mazarine Treyz 3 years ago in Portland, Oregon when I facilitated a one-day social media and nonprofit workshop for the Meyer Memorial Trust. 5. 6. 7. 8.

Game Changer The professional sports industry includes some of the world's most iconic, inspirational and influential organizations. In a cultural shift of historic proportions, the sports industry is now using its influence to advance ecological stewardship. North America's professional leagues, teams and venues have collectively saved millions of dollars by shifting to more efficient, healthy and ecologically intelligent operations. At the same time, the sports greening movement has brought important environmental messages to millions of fans worldwide. Sport is a great unifier, transcending political, cultural, religious and socioeconomic barriers. It also wields a uniquely powerful influence, both cultural and economic, that provides much-needed leadership in sustainable practices and, in so doing, promotes a nonpolitical public commitment to environmental protection. In my two decades as Commissioner, I have seen our sport take important strides forward on this essential issue. Related Links

Nature Blows My Mind! The Hypnotic Patterns of Sunflowers Sunflowers are beautiful, and iconic for the way their giant yellow heads stand off against a bold blue sky. And of course most of us love to munch on the seeds they produce. However, have you ever stopped to look at the pattern of seeds held within the center of these special flowers? Sunflowers are more than just beautiful food -- they're also a mathematical marvel. The pattern of seeds within a sunflower follows the Fibonacci sequence, or 1, 2, 3, 5, 8, 13, 21, 34, 55, 89, 144... According to PopMath: In order to optimize the filling [of the seeds in the flower's center], it is necessary to choose the most irrational number there is, that is to say, the one the least well approximated by a fraction. Here is a little more about sunflowers, the Fibonacci sequence and the Golden Ratio that you can review with kids from Math Is Fun. Sunflower seeds and amazing math. Do you have any photos of the patterns found in sunflower centers?

Video Can Help Boost Donations in End-Of-The-Year Fundraising Photo by Fensterbme on Flickr Note from Beth: I’m planning a year-end campaign for one of my favorite charities and wanted some good tips on incorporating video. And since, the busy season is coming up for all you nonprofit fundraisers – year end giving and Network for Good has just announced a Year-End Giving Challenge, I thought a guest post from Michael Hoffman about you can incorporate video to power your campaigns was in order. Enjoy. Video Can Help Boost Donations in End-Of-The-Year Fundraising by Michael Hoffman Adding video to your end-of-year online campaigns can help you achieve, and even exceed, your year-end fundraising goals. How big is video online? So how can we put the interest in video to work for our organizations, specifically your year-end fundraising? 4. YouTube annotations add interactivity to your videos by embedding a link into the video itself. 5. Lapsed donors are full of potential. 6. Michael Hoffman is the CEO of See3 Communications.