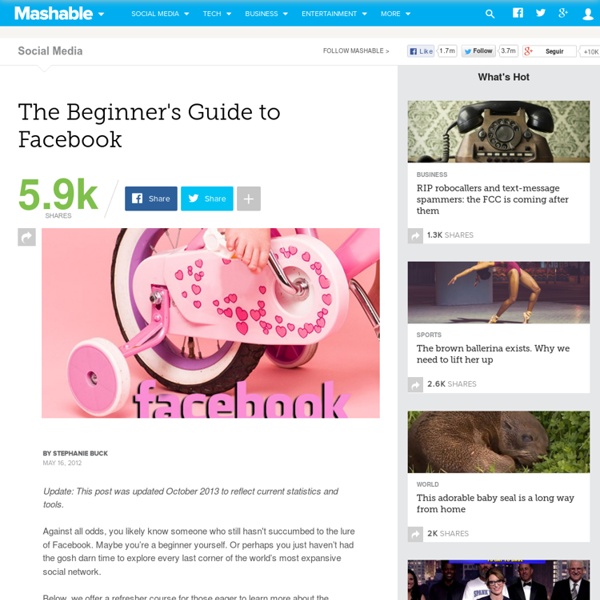 Update: This post was updated October 2013 to reflect current statistics and tools. Against all odds, you likely know someone who still hasn't succumbed to the lure of Facebook. Maybe you’re a beginner yourself. Or perhaps you just haven’t had the gosh darn time to explore every last corner of the world’s most expansive social network. Below, we offer a refresher course for those eager to learn more about the basics of Facebook. Let’s take a social stroll through the network’s main features, policies and culture norms. Even if you’re a pro, it’s fun to look at the platform through a beginner’s eyes. 1. Before you begin searching for friends, it’s important to complete your Timeline (aka your personal profile), which includes everything from uploading a profile picture and cover photo to outlining your employment history to determining your relationship status (OK, that’s optional). Check out these additional resources for building the best Timeline: 2. 3. 4. 5. 6. 7. 8. 9. 10. 11. Related:  Communications

15 Tools Every Social Media Manager Should Use This post was originally published on Feb 4, 2014 Smart businesses know that social media is a power to be reckoned with: social media channels create a direct line of communication between your company and consumers and give anyone with an Internet connection instant access to the latest buzz around your products or services. Not to mention, they can help you to generate revenue, while building your brand presence. Let that marinate for a second. The 16 tools below will help you and your social media manager take on the complexity of the job. 1. Those who have Google Analytics installed on their website can use Visually’s Google Analytics Report: an app that creates a custom infographic of your website’s activity and performance. Pricing: Free 2. This free, easy-to-use Twitter management tool allows you to oversee all aspects of your Twitter account(s) in one interface. 3. 4. Like Hootsuite, Sprout Social is a social media dashboard that monitors and manages multiple social networks. 5.

Outsourcing Services In India 5 Reasons Listicles Are Here to Stay, and Why That's OK | Underwire Image: IS/Getty Lists are everywhere. They’re the bread and butter of sites like Cracked and BuzzFeed, and regular content or sporadic filler at dozens more. They’ve met with no end of resistance from the old guard, cantankerous readers and old-school journalists convinced that listicles (and their admittedly unfortunate portmanteau) are rotting our brains, destroying our attention spans, and generally contributing to the decay of all that is right and good. Are lists overused? 1. Welcome to the information age! With near-infinite information at hand, and reporting moving at more and more breakneck speeds to keep pace with social media, it’s easily to end up either trapped by choice paralysis or whittling away hours on end trying to keep up. Regardless of Reddit’s motto, there is no front page of the Internet; but lists, at their best, give us focused, annotated tables of contents. 2. The way we’re presented with information changes the way we process and interpret it. 3. 4. 5.

Search. Explore. Experience – Apture This Video Will Have You Completely Rethink How You Conduct Yourself Online And In Person (Video) World• Robert Gordon • We, as human beings, think that through social networks, we’ve somehow become more social creatures. The problem with this theory is, the more we “connect” online, the less actual human interactions we have, making us actually fairly unsocial. A new video breaks down exactly how the social aspects of human beings have evolved and transformed, showing how we’ve regressed from a social standpoint. Shimi Cohen shows exactly what’s wrong with our social structure now, and how we manipulate how we want to be presented to peers, family members, and potential mates on social media, rather than having vulnerable and genuine conversations in real time. Check out this video below, and take a moment to truly assess how you conduct yourself, both online and in person. Top Photo by Brittny Moore

Nom Nom Paleo generational audience habits News organizations have been confronting the problem of a shrinking audience for more than a decade, but trends strongly suggest that these difficulties may only worsen over time. Today’s younger and middle-aged audience seems unlikely to ever match the avid news interest of the generations they will replace, even as they enthusiastically transition to the Internet as their principal source of news. Pew Research longitudinal surveys find that Gen Xers (33-47 years old) and Millennials (18-31 years old), who spent less time than older people following the news at the outset of their adulthood, have so far shown little indication that that they will become heavier news consumers as they age. Notably, a 2012 Pew Research national poll found members of the Silent generation (67-84 years old) spending 84 minutes watching, reading or listening to the news the day before the survey interview. Younger generations just don’t enjoy following news Older Americans’ habits show little change

Paleo Breakfast : Recipes for a Paleo Breakfast generational Media Consumption It is considered intuitive that younger people use more diverse devices than older people in order to consume media – but does that mean older adults don’t use any technology to get their news or enjoy television shows and movies? As our world and news cycle becomes faster-paced, in what ways are older generations making attempts to keep up with new media platforms? And how much further ahead of the curve are younger generations, really? Millennials* are at the front of the technology curve in terms of device usage, but what is critical to note is that, despite using less “traditional” platforms to consume media, they are still accessing similar types of information as other generations. Generation X*, while close to Millennials in many of their media consumption preferences, live in households that used more Video-On-Demand services in the past 30 days than all U.S. adults. SOURCE: Scarborough USA+ Study, Release 1, 2012. Want more generational insights?

The Primalist Logical Form First published Tue Oct 19, 1999; substantive revision Mon Jun 22, 2009 Some inferences are impeccable. Examples like (1–3) illustrate reasoning that cannot lead from true premises to false conclusions. In such cases, a thinker takes no epistemic risk by endorsing the conditional claim that if the premises are true, so is the conclusion. The conclusion follows immediately from the premises, without any further assumptions that might turn out to be false. By contrast, examples like (4–6) illustrate reasoning that involves at least some risk of going wrong—from correct premises to a mistaken conclusion. Inference (4) is not secure. Appeals to logical form arose in the context of attempts to say more about this intuitive distinction between impeccable inferences, which invite metaphors of security and immediacy, and inferences that involve a risk of slipping from truth to falsity. 1. If the first then the second, but not the second; so not the first. With regard to (1), 2. 3.

Raw Food SOS: Troubleshooting on the Raw Food Diet Open-Minded Man Grimly Realizes How Much Life He's Wasted Listening To Bullsh... CLEVELAND—During an unexpected moment of clarity Tuesday, open-minded man Blake Richman was suddenly struck by the grim realization that he's squandered a significant portion of his life listening to everyone's bullshit, the 38-year-old told reporters. A visibly stunned and solemn Richman, who until this point regarded his willingness to hear out the opinions of others as a worthwhile quality, estimated that he's wasted nearly three and a half years of his existence being open to people's half-formed thoughts, asinine suggestions, and pointless, dumbfuck stories. "Jesus Christ," said Richman, taking in the overwhelming volume of useless crap he's actively listened to over the years. "My whole life I've made a concerted effort to give people a fair shake and understand different points of view because I felt that everyone had something valuable to offer, but it turns out most of what they had to offer was complete bullshit." "Twenty minutes here, 10 minutes there.