How the Bitcoin Protocol Actually Works. 10 Things You Should Know About Blockchain. Lets dive right in. 1) Peak Blockchain hype was October 2015 when it made the cover of the Economist. 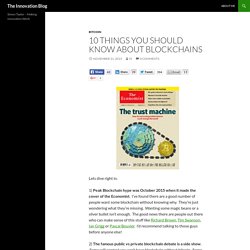 I’ve found there are a good number of people want some blockchain without knowing why. They’re just wondering what they’re missing. Wanting some magic beans or a silver bullet isn’t enough. The good news there are people out there who can make sense of this stuff like Richard Brown, Tim Swanson, Ian Grigg or Pascal Bouvier. 2) The famous public vs private blockchain debate is a side show. 3) Gideon Greenspan’s writing on blockchain is a must read. 4) Alex Batlin’s musings on smart contracts are also incredibly insightful. Vitalik Buterin reveals Ethereum at Bitcoin Miami 2014. Vitalik Buterin: Cryptoeconomic Protocols In the Context of Wider Society. DEVCON1: Ethereum for Dummies - Dr. Gavin Wood. Bitcoin: Transaction block chains. Bitcoin: What is it? Enter The Blockchain: How Bitcoin Can Turn The Cloud Inside Out. 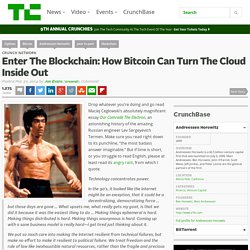 Make sure you read right down to its punchline, “the most badass answer imaginable.” But if time is short, or you struggle to read English, please at least read its angry rant, from which I quote: Technology concentrates power.In the 90’s, it looked like the Internet might be an exception, that it could be a decentralizing, democratizing force … but those days are gone … What upsets me, what really gets my goat, is that we did it because it was the easiest thing to do … Making things ephemeral is hard. Making things distributed is hard. Making things anonymous is hard. Finally, interesting uses for the blockchain that go beyond bitcoin. Most people who have heard the term think that the “blockchain” is only something to do with cryptocurrencies such as bitcoin, litecoin, doguecoin and others. 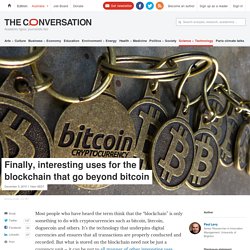 It’s the technology that underpins digital currencies and ensures that all transactions are properly conducted and recorded. But what is stored on the blockchain need not be just a currency unit – it can be put to all manner of other interesting uses. Why the blockchain will propel a services revolution. Two years ago, when Paul Brody was running IBM's 'internet of things' division in Silicon Valley, numerous colleagues told him to stop rambling on about the blockchain. 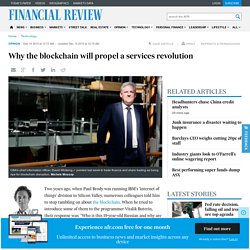 State of the Onion Report - Google Slides. Deja vú all over again: Thinking through law & code, again. Primavera de. Blockchain Workshops. Google. Squaring the Triangle: Secure, Decentralized, Human-Readable Names. When using computers, we like to refer to things with names. 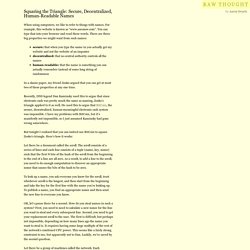 For example, this website is known as “www.aaronsw.com”. You can type that into your browser and read these words. There are three big properties we might want from such names: In a classic paper, my friend Zooko argued that you can get at most two of these properties at any one time. Recently, DNS legend Dan Kaminsky used this to argue that since electronic cash was pretty much the same as naming, Zooko’s triangle applied to it as well.

But tonight I realized that you can indeed use BitCoin to square Zooko’s triangle. Let there be a document called the scroll. Vitalik Buterin. Vitalik Buterin is a programmer, writer, founder of Ethereum, the decentralized web 3.0 publishing platform and co-founder of Bitcoin Magazine, a website and print magazine that covers bitcoin-related topics.[1][2][3] In 2014, Buterin won the World Technology Award for the co-creation and invention of Ethereum.[4] Buterin was born in Russia, grew up in Canada, and currently resides in Zug, Switzerland.[5] Buterin became interested in bitcoin in 2011, and co-founded the periodical Bitcoin Magazine that year.[1][3] He serves as head writer for the magazine, and has written about bitcoin-related topics for other publications, including Bitcoin Weekly.[1][6] He is a co-creator and inventor of Ethereum, described as a “decentralized mining network and software development platform rolled into one” that facilitates the creation of new cryptocurrencies and programs that share a single block chain (a cryptographic transaction ledger).[7][8] Awards[edit] References[edit] External links[edit] 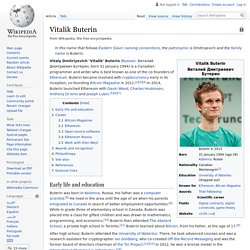 Sydney Blockchain Workshop. Michel Bauwens, theoretician, activist, and public speaker, is one of the pioneers of the peer-to-peer movement. 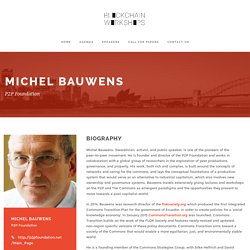 He is founder and director of the P2P Foundation and works in collaboration with a global group of researchers in the exploration of peer productions, governance, and property. His work, both rich and complex, is built around the concepts of networks and caring for the commons, and lays the conceptual foundations of a production system that would serve as an alternative to industrial capitalism, which also involves new ownership and governance systems. Bauwens travels extensively giving lectures and workshops on the P2P and The Commons as emergent paradigms and the opportunities they present to move towards a post-capitalist world. In 2014, Bauwens was research director of the floksociety.org which produced the first integrated Commons Transition Plan for the government of Ecuador, in order to create policies for a ‘social knowledge economy’.