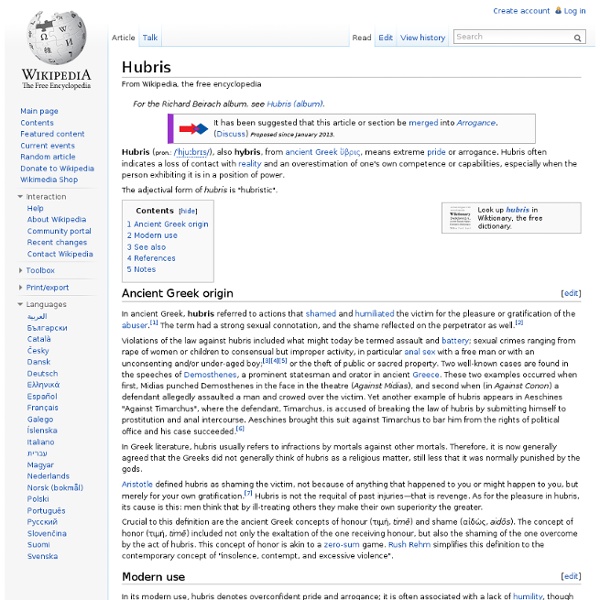 Hubris (/ˈhjuːbrɪs/, also hybris, from ancient Greek ὕβρις), means extreme pride or self-confidence. Hubris often indicates a loss of contact with reality and an overestimation of one's own competence, accomplishments or capabilities, especially when the person exhibiting it is in a position of power. The adjectival form of the noun hubris is "hubristic". Ancient Greek origin[edit] In ancient Greek, hubris referred to actions that shamed and humiliated the victim for the pleasure or gratification of the abuser.[1] The term had a strong sexual connotation, and the shame reflected on the perpetrator as well.[2] In Greek literature, hubris usually refers to infractions by mortals against other mortals. Aristotle defined hubris as shaming the victim, not because of anything that happened to a person or might happen to a person, but merely for that person's own gratification.[4] Hubris is not the requital of past injuries—that is revenge. Modern usage[edit] See also[edit] References[edit]

Martin Heidegger Martin Heidegger (German: [ˈmaɐ̯tiːn ˈhaɪdɛɡɐ]; 26 September 1889 – 26 May 1976) was a German philosopher, widely seen as a seminal thinker in the Continental tradition, particularly within the fields of existential phenomenology and philosophical hermeneutics. From his beginnings as a Catholic academic, he developed a groundbreaking and widely influential philosophy. His relationship with Nazism has been a controversial and widely debated subject. For Heidegger, the things in lived experience always have more to them than what we can see; accordingly, the true nature of being is “withdrawal”. The interplay between the obscured reality of things and their appearance in what he calls the “clearing” is Heidegger's main theme. It has been suggested[by whom?] Biography[edit] Early years[edit] The Mesnerhaus in Meßkirch, where Heidegger grew up Marburg[edit] Freiburg[edit] In 1927, Heidegger published his main work Sein und Zeit (Being and Time). According to historian Richard J. Post-war[edit]

Transcendentalism Transcendentalism is a religious and philosophical movement that developed during the late 1820s and '30s[1] in the Eastern region of the United States as a protest against the general state of spirituality and, in particular, the state of intellectualism at Harvard University and the doctrine of the Unitarian church as taught at Harvard Divinity School. Among the transcendentalists' core beliefs was the inherent goodness of both people and nature. They believe that society and its institutions—particularly organized religion and political parties—ultimately corrupt the purity of the individual. They have faith that people are at their best when truly "self-reliant" and independent. History[edit] Origins[edit] Transcendentalism is closely related to Unitarianism, the dominant religious movement in Boston at the early nineteenth century. Emerson's Nature[edit] So shall we come to look at the world with new eyes. The Transcendental Club[edit] Second wave of transcendentalists[edit] Notes[edit]

Georg Wilhelm Friedrich Hegel The birthplace of Hegel in Stuttgart, which now houses The Hegel Museum Georg Wilhelm Friedrich Hegel (German: [ˈɡeɔɐ̯k ˈvɪlhɛlm ˈfʁiːdʁɪç ˈheːɡəl]; August 27, 1770 – November 14, 1831) was a German philosopher, and a major figure in German Idealism. His historicist and idealist account of reality revolutionized European philosophy and was an important precursor to Continental philosophy and Marxism. Life[edit] Early years[edit] Childhood[edit] Hegel was born on August 27, 1770 in Stuttgart, in the Duchy of Württemberg in southwestern Germany. At age of three Hegel went to the "German School". In 1776 Hegel entered Stuttgart's Gymnasium Illustre. Tübingen (1788-93)[edit] At the age of eighteen Hegel entered the Tübinger Stift (a Protestant seminary attached to the University of Tübingen), where two fellow students were to become vital to his development - poet Friedrich Hölderlin, and philosopher-to-be Friedrich Wilhelm Joseph Schelling. Bern (1793–96) and Frankfurt (1797–1801)[edit]

Historicism Historicism is a mode of thinking that assigns a central and basic significance to a specific context, such as historical period, geographical place and local culture. As such it is in contrast to individualist theories of knowledges such as empiricism and rationalism, which neglect the role of traditions. Historicism therefore tends to be hermeneutical, because it places great importance on cautious, rigorous and contextualized interpretation of information, or relativist, because it rejects notions of universal, fundamental and immutable interpretations.[1] The term has developed different and divergent, though loosely related, meanings. Elements of historicism appear in the writings of Italian philosopher G. B. Historicism may be contrasted with reductionist theories, which suppose that all developments can be explained by fundamental principles (such as in economic determinism), or theories that posit historical changes as result of random chance. Variants[edit] Hegelian[edit] G.

Spacetime In non-relativistic classical mechanics, the use of Euclidean space instead of spacetime is appropriate, as time is treated as universal and constant, being independent of the state of motion of an observer.[disambiguation needed] In relativistic contexts, time cannot be separated from the three dimensions of space, because the observed rate at which time passes for an object depends on the object's velocity relative to the observer and also on the strength of gravitational fields, which can slow the passage of time for an object as seen by an observer outside the field. Until the beginning of the 20th century, time was believed to be independent of motion, progressing at a fixed rate in all reference frames; however, later experiments revealed that time slows at higher speeds of the reference frame relative to another reference frame. The term spacetime has taken on a generalized meaning beyond treating spacetime events with the normal 3+1 dimensions. Spacetime in literature[edit]

Libertarianism (metaphysics) The term "libertarianism" in a metaphysical or philosophical sense was first used by late Enlightenment free-thinkers to refer to those who believed in free will, as opposed to determinism.[9] The first recorded use was in 1789 by William Belsham in a discussion of free will and in opposition to "necessitarian" (or determinist) views.[10][11] Metaphysical and philosophical contrasts between philosophies of necessity and libertarianism continued in the early 19th century.[12] Explanations of libertarianism that do not involve dispensing with physicalism require physical indeterminism, such as probabilistic subatomic particle behavior – theory unknown to many of the early writers on free will. Physical determinism, under the assumption of physicalism, implies there is only one possible future and is therefore not compatible with libertarian free will. Nozick puts forward an indeterministic theory of free will in Philosophical Explanations.[6]

Philosophy of physics Centuries ago, the study of causality, and of the fundamental nature of space, time, matter, and the universe were part of metaphysics. Today the philosophy of physics is essentially a part of the philosophy of science. Physicists utilize the scientific method to delineate the universals and constants governing physical phenomena, and the philosophy of physics reflects on the results of this empirical research. Purpose of physics[edit] According to Niels Bohr, the purpose of physics is:[1] not to disclose the real essence of phenomena but only to trackdown (...) relations between the manifold aspects of experience. Many, particularly realists, find this minimal formulation an inadequate formulation of the purpose of physics, which they view as providing, in addition, a deeper world picture. Philosophy of space and time[edit] Time[edit] Time, in many philosophies, is seen as change. Time travel[edit] A second, similar type of time travel is permitted by general relativity. Space[edit] Elsewhere: