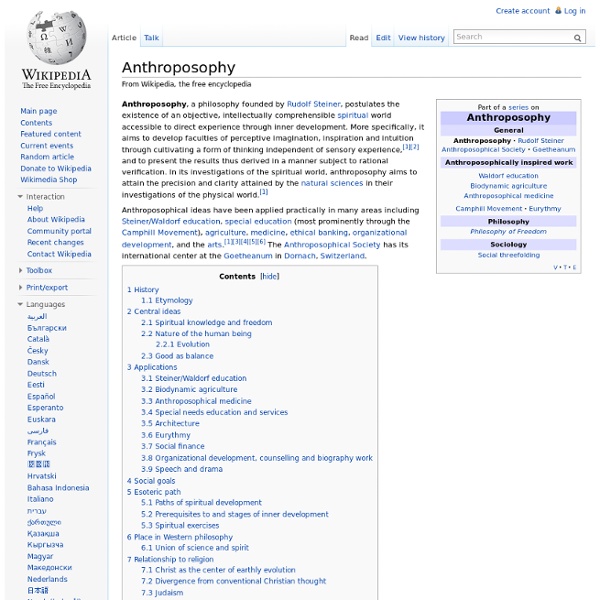 Anthroposophy, a philosophy founded by Rudolf Steiner, postulates the existence of an objective, intellectually comprehensible spiritual world accessible to direct experience through inner development. More specifically, it aims to develop faculties of perceptive imagination, inspiration and intuition through cultivating a form of thinking independent of sensory experience,[1][2] and to present the results thus derived in a manner subject to rational verification. In its investigations of the spiritual world, anthroposophy aims to attain the precision and clarity attained by the natural sciences in their investigations of the physical world.[1] History[edit] The early work of the founder of anthroposophy, Rudolf Steiner, culminated in his Philosophy of Freedom (also translated as The Philosophy of Spiritual Activity and Intuitive Thinking as a Spiritual Path). By the beginning of the twentieth century, Steiner's interests turned to explicitly spiritual areas of research. Etymology[edit]

Christian mysticism Christian mysticism refers to the development of mystical practices and theory within Christianity. It has often been connected to mystical theology, especially in the Catholic and Eastern Orthodox traditions. The attributes and means by which Christian mysticism is studied and practiced are varied and range from ecstatic visions of the soul's mystical union with God to simple prayerful contemplation of Holy Scripture (i.e., Lectio Divina). Etymology[edit] "Mysticism" is derived from the Greek μυω, meaning "to conceal",[1] and its derivative μυστικός, mystikos, meaning 'an initiate'. In the Hellenistic world, a "mystikos" was an initiate of a mystery religion. In early Christianity the term "mystikos" referred to three dimensions, which soon became intertwined, namely the biblical, the liturgical and the spiritual or contemplative. Definition[edit] Presence[edit] Presence versus experience[edit] Personal transformation[edit] Social constructionism[edit] Development[edit] Gospels[edit]

For the Future of Housing, FTF, Affordable Housing Development Company Steiner Waldorf Schools Fellowship Magic (paranormal) Magic or sorcery is an attempt to understand, experience and influence the world using rituals, symbols, actions, gestures and language.[1][2][3][4] Modern Western magicians generally state magic's primary purpose to be personal spiritual growth.[5] Modern theories of magic may see it as the result of a universal sympathy where some act can produce a result somewhere else, or as a collaboration with spirits who cause the effect.[6] The belief in and the practice of magic has been present since the earliest human cultures and continues to have an important religious and medicinal role in many cultures today.[7][8] Magic is often viewed with suspicion by the wider community, and is sometimes practiced in isolation and secrecy.[4] The word "magic" derives via Latin magicus from the Greek adjective magikos (μαγικός) used in reference to the "magical" arts of the Persian Magicians (Greek: magoi, singular mágos, μάγος), the Zoroastrian astrologer priests of the ancient Persian Empire.

The Future of Housing and Credit Markets Turmoil in the U.S. housing and financial markets continues, as evidenced by the recently announced rescue plan for mortgage giants Fannie Mae and Freddie Mac and the latest financial turmoil involving Lehman Brothers, Merrill Lynch and AIG. The impacts are being felt on Main Street where millions of American families have lost their homes or are struggling to keep them, while others are finding it harder to buy new homes due to credit constraints. Owing in part to the financial and economic challenges, the demand for low-income rental housing is likely to grow, putting additional stress on a system that already falls short of providing adequate housing for many qualifying applicants. On September 23, The Hamilton Project released three new discussion papers and hosted a three-panel policy discussion on various aspects of the housing and credit markets. Former U.S. Treasury Secretary Robert E. Event Multimedia: CSPAN video of panel one »CSPAN video of panel three »

Anthroposophical Society in Great Britain, Rudolf Steiner and Anthroposophy Faust Faust is the protagonist of a classic German legend. He is a scholar who is highly successful yet dissatisfied with his life, so he makes a pact with the Devil, exchanging his soul for unlimited knowledge and worldly pleasures. The Faust legend has been the basis for many literary, artistic, cinematic, and musical works that have reinterpreted it through the ages. The Faust of early books—as well as the ballads, dramas, movies and puppet-plays which grew out of them—is irrevocably damned because he prefers human to divine knowledge; "he laid the Holy Scriptures behind the door and under the bench, refused to be called doctor of Theology, but preferred to be styled doctor of Medicine".[1] Plays and comic puppet theatre loosely based on this legend were popular throughout Germany in the 16th century, often reducing Faust and Mephistopheles to figures of vulgar fun. Summary of the story[edit] During the term of the bargain, Faust makes use of Mephistopheles in various ways. Sources[edit]

The future of homes and housing / The Christian Science Monitor As we move further into the 21st century, it's natural to wonder what the future will bring: In what kinds of houses and communities will Americans be living in 2020? What kind of jobs will people hold? Will fewer of us be married? Writers Kim Campbell, Clayton Collins, Marilyn Gardner, and Elizabeth Lund sought answers to these questions - and more - from eight experts whose jobs require them to predict what our lives will be like in 15 years. Read excerpts from those interviews in this section. Skip to next paragraph Subscribe Today to the Monitor Click Here for your FREE 30 DAYS ofThe Christian Science MonitorWeekly Digital Edition Where do you think we're going to be living in 2020? I think it's a combination of [suburban and urban]. The way I can tell you what's going to happen in a city [in terms of inhabitants] is I pay attention to who serves me French fries.... The one thing that we have going for us is immigration.

About us Derived from the two Greek words, "Theos" (a god, the Deity) and "Sophia" (wisdom), Theosophy or Theosophia may be defined as "knowledge of divine things" or "Divine Wisdom such as that possessed by the gods". Its philosophy is a contemporary presentation of the perennial wisdom underlying the world's religions, sciences, and philosophies. "The Society was formed to assist in showing to men that such a thing as Theosophy exists, and to help them to ascend towards it by studying and assimilating its eternal verities." H.P. "Theosophy is no new candidate for the world's attention, but only the restatement of principles which have been recognised from the very infancy of mankind." Henry Steel Olcott The Theosophical Society was founded by Helena Petrovna Blavatsky, Henry Steel Olcott, William Quan Judge, and others in New York City on November 17, 1875. Freedom of Thought The genuine acceptance of the Three Objects of the Society, 1. The Theosophical Society in England

The Future of Housing, Near and Far The housing market is and always has been loosely connected to the long-term trends in employment and the economy. Homes prices move up as more jobs are created because there are more households created and those family units need housing. As the economy grows and incomes improve it creates more demand for bigger and newer homes by the newly affluent. But the reverse is also true, at least if the trends persist for more than a few months in duration. It appears we have more fundamental economic weakness on the near horizon. If the private sector falls short of that level the economy will be losing jobs and unemployment will rise. The net effect of the gulf oil disaster will be more job losses. What does unemployment have to do with housing? Is this author on the ball? Follow and be the first to know when they publish. Follow K202 (2,939 followers) Long/short equity, value, growth at reasonable price, income (You’ll be notified by email with new articles from your favorite authors.) New!

DarkCopy - Simple, full screen text editing The Future of America Housing – 5 Charts Showing Continued Pressure on Home Prices for the next Few Years. Household formation, Trend to Urban Centers, Lower Prices, Over Construction Housing prices in most urban areas will face pressure in the upcoming years because of a variety of factors. Last month as prices fell in many areas including Southern California, some were surprised because a belief that a trough had been hit had already set in. This is not the case. We also have issues on the supply side. Reason #1 – Household Formation Source: The Urban Land Institute The Urban Land Institute put out an interesting paper in January examining the future of housing. Another big problem keeping households from forming in the current market is the high unemployment rate. The unemployment rate for those from 20 to 24 is 15.8 percent and for those 25 to 34 it is 9.9 percent. Reason #2 – Overbuilding and Housing Starts The above chart shows the massive overbuilding that occurred during the housing bubble. If we look at the housing start side of the equation, builders clearly realize that the demand side is still weak for new construction: Reason #3 – Single Family Home Sales