'How Creativity Works': It's All In Your Imagination 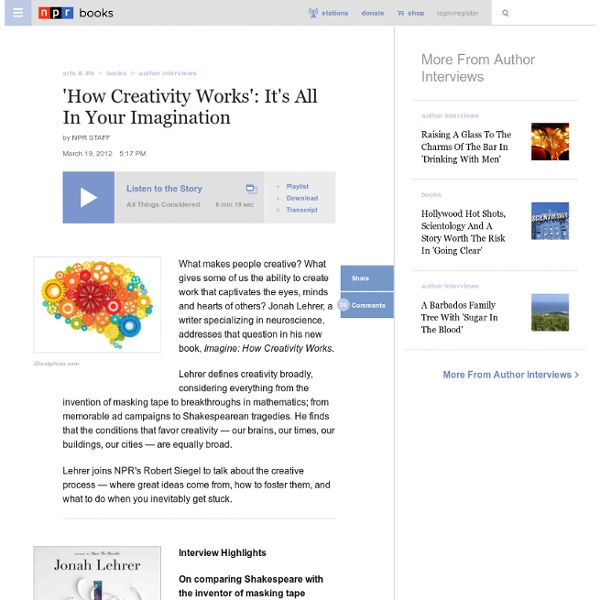 iStockphoto.com What makes people creative? What gives some of us the ability to create work that captivates the eyes, minds and hearts of others? Jonah Lehrer, a writer specializing in neuroscience, addresses that question in his new book, Imagine: How Creativity Works. Lehrer defines creativity broadly, considering everything from the invention of masking tape to breakthroughs in mathematics; from memorable ad campaigns to Shakespearean tragedies. He finds that the conditions that favor creativity — our brains, our times, our buildings, our cities — are equally broad. Lehrer joins NPR's Robert Siegel to talk about the creative process — where great ideas come from, how to foster them, and what to do when you inevitably get stuck. Interview Highlights On comparing Shakespeare with the inventor of masking tape "I think we absolutely can lump them all together. "... On how Steve Jobs redesigned Pixar studios to maximize collaboration and creativity " ... "It's near midnight.

12 Most Striking Tendencies of Creative People Ever wonder what makes those wacky, creative types tick? How is it that some people seem to come up with all kinds of interesting, original work while the rest of us trudge along in our daily routines? Creative people are different because they operate a little differently. They: 5 Steps to Being More Creative [INFOGRAPHIC] Having trouble coming up with new ideas? Feel out of touch with your creative self? Don’t worry – the creative process is not out of your reach. By following these five steps you can learn new ways of thinking and add some unstructured structure to the way you create new ideas.

How To Steal Like An Artist by Austin Kleon Wednesday, March 30th, 2011 Buy the book: Amazon | B&N | More… Here’s what a few folks have said about it: “Brilliant and real and true.”—Rosanne Cash“Filled with well-formed advice that applies to nearly any kind of work.” 4 Ways To Amplify Your Creativity The holidays are over, the weather is lousy, and we’re sober again. We made all kinds of New Year’s promises, but the big one that will change our careers, if not our lives, is the promise to ourselves to become more creative. In my new book, Creative Intelligence, I show that creativity is learned behavior that gets better with training--like sports. You can make creativity routine and a regular part of your life. The Rise of the New Groupthink But there’s a problem with this view. Research strongly suggests that people are more creative when they enjoy privacy and freedom from interruption. And the most spectacularly creative people in many fields are often introverted, according to studies by the psychologists Mihaly Csikszentmihalyi and Gregory Feist. They’re extroverted enough to exchange and advance ideas, but see themselves as independent and individualistic.

Why Creativity Matters More Than Passion for Entrepreneurs What is the most important quality of an entrepreneur? Many would argue it is passion -- an overwhelming love of what one is doing, and the drive and determination to see one's dreams realized. Others might say leadership -- the ability to bring a team of people together and guide them toward a common goal. But some believe that creativity — a boundless imagination that is constantly innovating and seeing the world through a different lens — is the ultimate key to business success. Researchers discover how and where imagination occurs in human brains Philosophers and scientists have long puzzled over where human imagination comes from. In other words, what makes humans able to create art, invent tools, think scientifically and perform other incredibly diverse behaviors? The answer, Dartmouth researchers conclude in a new study, lies in a widespread neural network—the brain's "mental workspace"—that consciously manipulates images, symbols, ideas and theories and gives humans the laser-like mental focus needed to solve complex problems and come up with new ideas. Their findings, titled "Network structure and dynamics of the mental workspace," appear the week of Sept. 16 in the Proceedings of the National Academy of Sciences. "Our findings move us closer to understanding how the organization of our brains sets us apart from other species and provides such a rich internal playground for us to think freely and creatively," says lead author Alex Schlegel , a graduate student in the Department of Psychological and Brain Sciences.

8 Types Of Imagination Imagination is critical to innovation and learning–but what exactly is it? Dr. Murray Hunter of the University of Malaysia Perlis discusses the 8 types of imagination we use on a daily basis, with explanations for each.