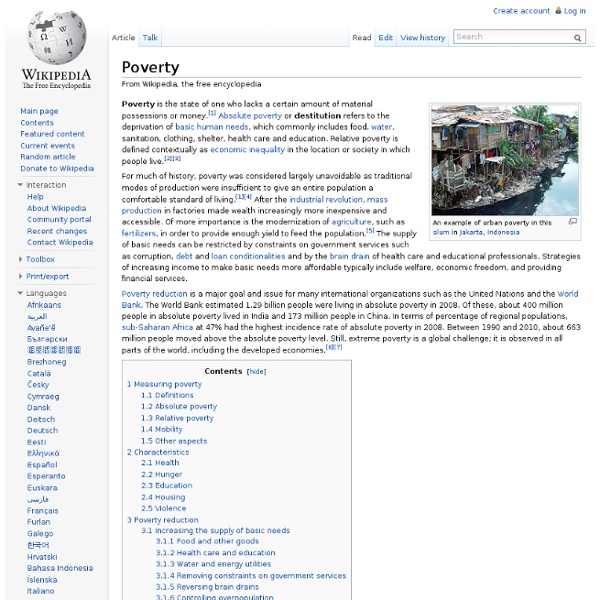 Poverty is general scarcity or dearth, or the state of one who lacks a certain amount of material possessions or money.[1] Absolute poverty or destitution refers to the deprivation of basic human needs, which commonly includes food, water, sanitation, clothing, shelter, health care and education. Relative poverty is defined contextually as economic inequality in the location or society in which people live.[2][3] After the industrial revolution, mass production in factories made production goods increasingly less expensive and more accessible. Of more importance is the modernization of agriculture, such as fertilizers, to provide enough yield to feed the population.[4] The supply of basic needs can be restricted by constraints on government services such as corruption, tax avoidance, debt and loan conditionalities and by the brain drain of health care and educational professionals. Etymology The English word "poverty" via Anglo-Norman povert. Measuring poverty Definitions Absolute poverty

Related:  schools of thought on criminology

Education School children sitting in the shade of an orchard in Bamozai, near Gardez, Paktya Province, Afghanistan A right to education has been recognized by some governments. At the global level, Article 13 of the United Nations' 1966 International Covenant on Economic, Social and Cultural Rights recognizes the right of everyone to an education.[2] Although education is compulsory in most places up to a certain age, attendance at school often isn't, and a minority of parents choose home-schooling, e-learning or similar for their children. Poverty Facts and Stats This figure is based on purchasing power parity (PPP), which basically suggests that prices of goods in countries tend to equate under floating exchange rates and therefore people would be able to purchase the same quantity of goods in any country for a given sum of money. That is, the notion that a dollar should buy the same amount in all countries. Hence if a poor person in a poor country living on a dollar a day moved to the U.S. with no changes to their income, they would still be living on a dollar a day.

Causes of Poverty Author and Page information by Anup ShahThis Page Last Updated Sunday, September 28, 2014 Almost half the world — over 3 billion people — live on less than $2.50 a day.The GDP (Gross Domestic Product) of the 41 Heavily Indebted Poor Countries (567 million people) is less than the wealth of the world’s 7 richest people combined.Nearly a billion people entered the 21st century unable to read a book or sign their names.Less than one per cent of what the world spent every year on weapons was needed to put every child into school by the year 2000 and yet it didn’t happen.1 billion children live in poverty (1 in 2 children in the world). 640 million live without adequate shelter, 400 million have no access to safe water, 270 million have no access to health services. 10.6 million died in 2003 before they reached the age of 5 (or roughly 29,000 children per day). — More Facts (and Sources) » Poverty is the state for the majority of the world’s people and nations. Why is this?

Make Poverty History In 2005, world leaders were given a huge global mandate to make poverty history. Unprecedented public pressure led them to make some big promises - to increase aid, and cancel many poor countries' debts. But they haven't shown enough urgency in taking the action necessary to eradicate poverty. But today, 5,000 children die every day from drinking dirty water. More than five million people living with HIV/AIDS still do not have access to medicines.

Poverty in the United States In November 2012 the U.S. Census Bureau said more than 16% of the population lived in poverty, including almost 20% of American children,[7] up from 14.3% (approximately 43.6 million) in 2009 and to its highest level since 1993. In 2008, 13.2% (39.8 million) Americans lived in poverty.[8] Starting in the 1980s, relative poverty rates have consistently exceeded those of other wealthy nations.[9] California has a poverty rate of 23.5%, the highest of any state in the country.[10] In 2009 the number of people who were in poverty was approaching 1960s levels that led to the national War on Poverty.[11] In 2011 extreme poverty in the United States, meaning households living on less than $2 per day before government benefits, was double 1996 levels at 1.5 million households, including 2.8 million children.[12] This would be roughly 1.2% of the US population in 2011, presuming a mean household size of 2.55 people. Measures of poverty[edit] Two official measures of poverty[edit]

Alcohol Ball-and-stick model of the hydroxyl (-OH) functional group in an alcohol molecule (R3COH). The three "R's" stand for carbon substituents or hydrogen atoms.[1] The hydroxyl (-OH) functional group with bond angle. An important class of alcohols are the simple acyclic alcohols, the general formula for which is CnH2n+1OH. Of these ethanol (C2H5OH) is the alcohol found in alcoholic beverages; in common speech the word alcohol refers to ethanol. National Poverty Center How does the United States measure poverty? The United States determines the official poverty rate using poverty thresholds that are issued each year by the Census Bureau. The thresholds represent the annual amount of cash income minimally required to support families of various sizes. The methodology for calculating the thresholds was established in the mid-1960s and has not changed in the intervening years. The thresholds are updated annually to account for inflation.[1] A family is counted as poor if its pretax money income is below its poverty threshold.

Causes of Poverty As of July 1, 2013 ThinkQuest has been discontinued. We would like to thank everyone for being a part of the ThinkQuest global community: Students - For your limitless creativity and innovation, which inspires us all. Teachers - For your passion in guiding students on their quest. Partners - For your unwavering support and evangelism. Parents - For supporting the use of technology not only as an instrument of learning, but as a means of creating knowledge.

15 Shocking Poverty Statistics That Are Skyrocketing As The American Middle Class Continues To Be Slowly Wiped Out The "America" that so many of us have taken for granted for so many decades is literally disintegrating right in front of our eyes. Most Americans are still operating under the delusion that the United States will always be "the wealthiest nation" in the world and that our economy will always produce large numbers of high paying jobs and that the U.S. will always have a very large middle class. But that is not what is happening. The very foundations of the U.S. economy have rotted away and we now find ourselves on the verge of an economic collapse. Already, millions upon millions of Americans are slipping out of the middle class and into the devastating grip of poverty. Statistic after statistic proves that the middle class in the United States is shrinking month after month after month.

What is Poverty? | what is poverty? | millennium development goals | measuring poverty | responding to poverty | sources | What does it mean to be poor? How is poverty measured? Printing: Condemning America's Poor For Being Poor; A National Shame December 11, 2013 By michael payne Let's pick on the poor, trash them and call them lazy, shiftless Americans who don't want to work and are hooked on handouts from the government. If they would get off their butts and work like the rest of us they wouldn't be poor.

Crime statistics Crime statistics attempt to provide statistical measures of crime committed in societies. Given that crime is usually secretive by nature, measurements of it are likely to be inaccurate. Several methods for measuring crime exist, including household surveys, hospital or insurance records, and compilations by police and similar law enforcement agencies. Typically official crime statistics are the latter, but some offences are likely to go unreported to the police.